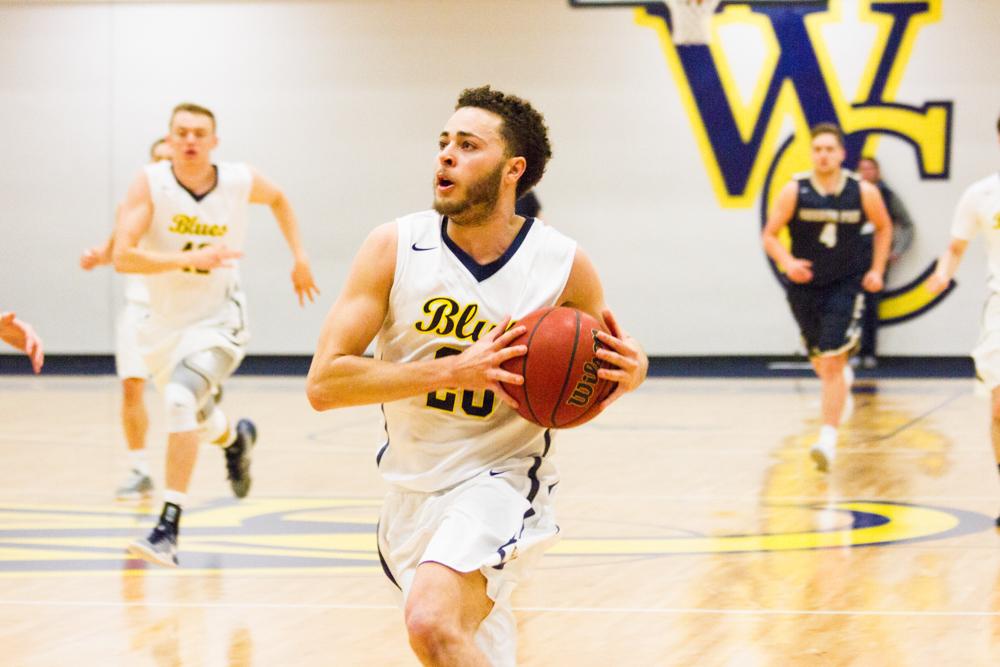 On an overcast day in central Virginia, the Whitman men’s basketball team came up just short of completing their fairytale season, losing for the first and last time this year to No. 3 Babson in the National Semifinal of the NCAA Tournament.

That cloudy day, March 17, marked the final leg of a historic, months long journey that was years in the making. In addition to their almost-unblemished record, the Blues racked up awards and accomplishments throughout the season. Star point guard Tim Howell took home the NW Conference Player of the Year award, the West District Player of the Year award, and was voted an All-American. Blues Head Coach Eric Bridgeland was also voted the NABC Coach of the Year in the West District.

After finishing the regular season undefeated–and convincingly so– the Blues survived an overtime challenge from rival Whitworth in the NW Conference Championship to secure the overall #1 seed in the NCAA Tournament.

The Blues’ NCAA postseason began at their home court in Walla Walla. First they took down Rhodes College, 111-98, then held off Claremont-Mudd-Scripps Colleges 79-73. Their wins earned them a ticket to Marietta, Ohio for the round of sixteen against Hardin-Simmons University. After the Blues triumphed over the Cowboys 102-82, Whitman turned around the next day to finish No. 13 Rochester in the quarterfinals, winning with a tight score of 91-87.

With the National Championship in tantalizing reach, Whitman’s season and historic winning streak was brought to an end in Salem, Virginia when Babson College edged them out in that Final Four game with a score of 91 to 85.

“The whole season was a lot of fun altogether. We were disappointed to not finish the season as we would have liked, but still we enjoyed every moment of the journey. Now after the season we can all look back and see all the historical events we have been apart of for our program, which is awesome,” sophomore Jack Stewart recalled.

Even prior to the NCAA Tournament, the Blues’ season marked some impressive milestones in Whitman men’s basketball history. Since the Northwest Conference joined the NCAA in 1996, the men’s program had yet to win a Conference Championship title until this spring. Moreover, it was the men’s team’s first time hosting the Conference Championship Tournament at their home court. Finishing out their conference season undefeated, it was also their first time entering the national tournament as the No.1 ranked team.

“Once nationals came, there was a greater sense of urgency and desire to win from both the coaching staff and everyone on the team. It’s a win or go home mentality,” Howell recalled.

Going into a field of 64 of the best Division III men’s basketball teams in the country with an undefeated season and the No.1 ranking put a large target on the Blues’ backs. They were the team to beat. The close games that marked Whitman’s NCAA Tournament progression repeatedly involved changes in momentum and large point swings, as seen in Whitman’s hard come-back to beat Rochester, and were a testament to the high level of competition present in the tournament pool.

“We were playing teams that had these bursts of confidence because they had nothing to lose,” junior forward JoJo Wiggins explained.

Even though the pressure of an undefeated season weighed on the players, they maintained a level-headed rationale about the matter.

“Win or lose, we just wanted to make sure we had put in our best effort for each game,” Howell confirmed.

“We’re not going to sit there and hope we lose a game so we can get the pressure off of us. Every time we touch the court we want to win the game,” Wiggins said.

Although the loss to Babson was an emotional one for Whitman, they have big hopes for next year and their preparation is already underway. The team is incredibly young, and will not lose any of its 14 players to graduation. All they will add is their well-established brotherhood. Their “Fight As Brothers” slogan will live on as they start building up strength in the gym and strategizing for claiming the National Title this upcoming season.

“We felt a little defeated and had a bad taste in our mouth [after losing], but we’re going to remember that taste for next year. A national title is that icing on the cake that we need to clench, so that’s what’s on our minds,” Howell said.

“Every practice, every road trip, every game, every time we step on the court we have this mentality that regardless of what happens, if we win or lose, we fight as brothers,” Wiggins added.

Their historic winning streak and season may have come to a close, but the groundwork is already laid for their 2018 success.