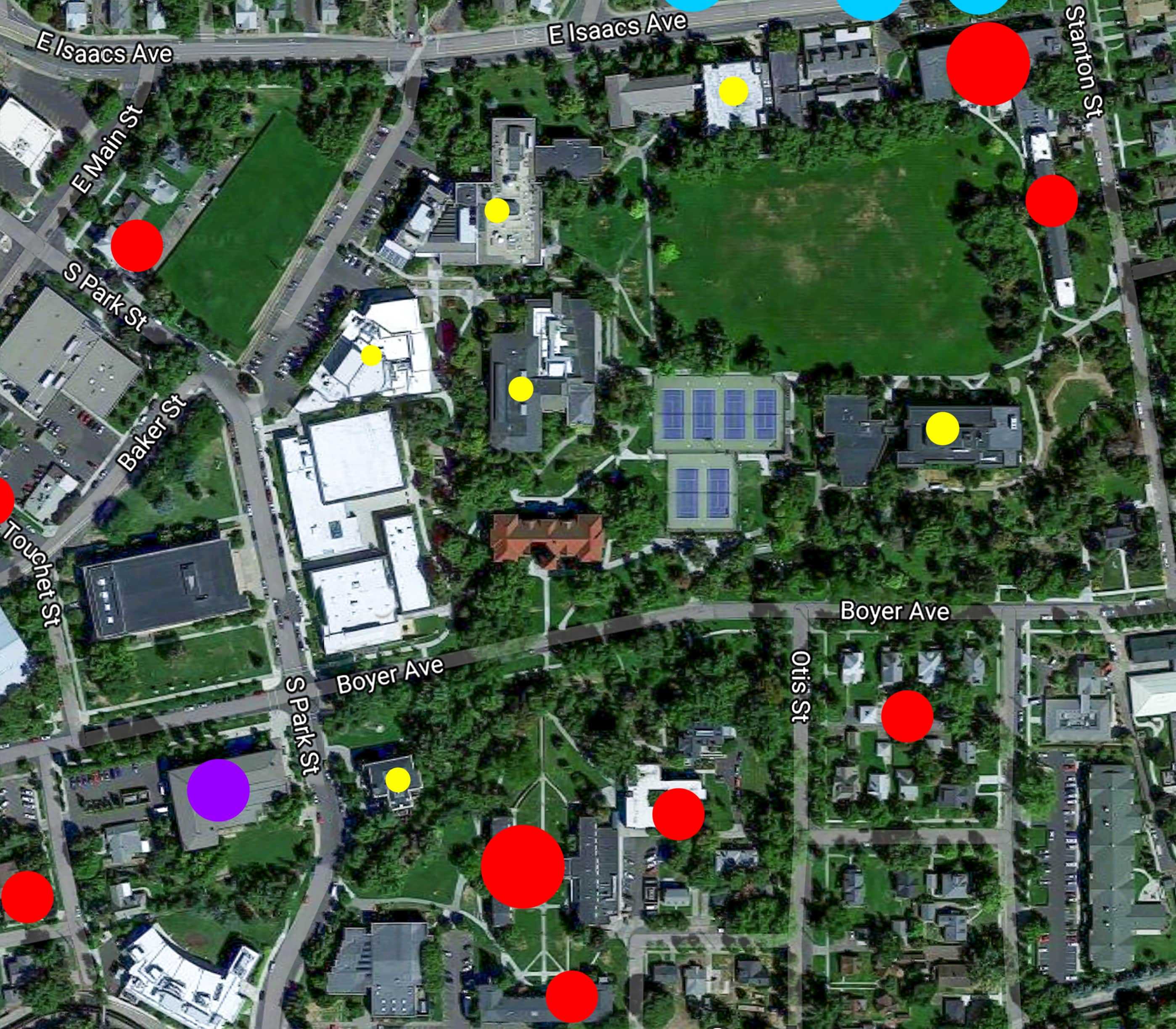 Since September 2013, several hundred crimes have been recorded in Whitman’s Campus Crime Log. Of those, almost 40% occurred in and around residence halls.

Since September 2013, several hundred crimes have been recorded in Whitman’s Campus Crime Log. Of those, almost 40% occurred in and around residence halls.

What’s up with Whitman’s crime?

Spring Break is often a time when the campus sees an increase in crime. Normally, there are several incidents of theft and some students will choose to report the crime to Whitman’s Security Office. When this happens, the crime is added to the Whitman College Daily Crime Log.  The most recent entry in the crime log is a burglary on March 20, when two individuals accessed Sherwood Center via the roof before being apprehended and arrested by police.

The Daily Crime Log is open to the public and is an online document where anyone can see the crimes that have been reported to Whitman. Logged crimes include larceny (theft of personal property), burglary, drug and alcohol violations, vandalism, Title IX violations and others. The log includes the date, time, location and nature of the incidents.

According to Matt Stroe, Director of Security, there are a few ways crime is reported on campus. Often students report directly to the Office of Security, though crimes may be reported by campus security authorities: security officers, Whitman staff, faculty and peer leaders such as resident assistants, intercultural center interns, Reid building managers and security escorts.

Stroe believes that the student reporters are often helpful because they might be more approachable than security officers or members of the administration.

“Students will sometimes be more open with a peer than they will with an adult. Sometimes you see an adult and you kind of clam up, but more information may be gleaned from a student to student interaction,” Stroe said. Stroe also helps students report crimes to the Walla Walla Police Department if they do not feel comfortable reporting themselves.

“Most of the time [crime reports] come from the students themselves calling security,” Stroe said. “It kinds of come down to some students, faculty, staff alike who don’t like interacting with law enforcement and I have no problem being that liaison if they need it.”

Many of the crimes will end up in Whitman’s annual Clery Report with the help of Title IX Administrator and Associate Dean of Students Juli Dunn and Associate Dean of Students Barbara Maxwell, but some crimes exist solely in the campus crime log. Since September of 2013, 189 crimes have been recorded in the crime log. Only 42 of these are alcohol and drug violations. Almost 40 percent of the crimes were reported in on-campus housing, excluding fraternities.

Excluding alcohol and drug violations, Jewett and Prentiss Halls tied for the most on-campus crime. Most crime at Prentiss Hall is theft, which Stroe accredits to the easily accessible bike racks.

“Some of the bikes that were getting stolen were from the Bon Appetite back door. Someone could come up the dark street there, Nakomi Lane, grab them, then go up another dark street, Linden Lane. It’s all about access,” Stroe said.

“This is pretty difficult because it seems that most of Whitman College students’ fear of crime stems from exterior forces. I feel as if the political climate contributes to fear of crime, especially because it is framed as such a major social issue by the Trump Administration,” Osegueda wrote in an email to The Wire.

Overall, Stroe, Maxwell and Dunn are relatively pleased with the direction of crime reporting at Whitman. The number of thefts is down across campus and the college has a positive relationship with the Walla Walla Police Department. However, students do still need to take precautions to protect themselves and their belongings.

“Last year, constantly, sometimes even twice a day, we were getting calls saying people had missing bikes or electronics. But, we’ve been pretty fortunate this year that we haven’t gotten a lot,” Stroe said.

“As a college campus and as a city, both Whitman and Walla Walla are safe. I feel safe living here, but it’s not nirvana … People need to take precautions for their own personal safety. When I leave, I lock my home. When I get out of my car, I lock my car. When I park my bicycle, I lock it up. Like, I take precautions for my safety and the safety of my family and my possessions. I would hope that … students will feel that same sense of responsibility,” Maxwell said.

What is the Clery Report?

Whitman College is required to release a Clery Report each year as per the Clery Act of 1990 which requires academic institutions to report campus crime statistics. The goal of the Clery Act is to make sure prospective students can make an informed decision in their college selection.

Director of Security, Matt Stroe works with Associate Dean of Students, Juli Dunn and Associate Dean of Students: Student Programs and Activities, Barbara Maxwell. Stroe, Dunn and Maxwell all note that the Clery report, though crafted with good intentions, is often a flawed metric for comparing colleges. Part of this is due to the act’s strange requirements, such as requiring the college to have an action plan for students missing from residence halls but not requiring the college to report larceny.

“We could have 100 bicycles stolen, but they are not going to end up in the Clery report because larceny isn’t a Clery statistic,” Maxwell said.

Dunn includes Title IX violations in Whitman’s Clery Report. However, some incidents cannot be filed in the Clery Report if Dunn does not have sufficient information about the offense.

The Clery Report does not acknowledge how some schools may have more successful reporting programs than others. For example, Whitman College reported seven incidents of forcible sexual offenses in 2014, while Western Washington University, which enrolls ten times as many students as Whitman, reported nine. Western’s Title IX reporting process has been criticized in the past, which could help explain why two schools with vastly different student populations report such similar numbers.

“Clery really was intended to create an even playing field so that when parents and prospective students looked they would have sense of the types of crimes that are occurring. The problem is, with sex offenses in particular … anybody can [anonymously file a complaint] and it will be counted by Clery … at other colleges you have to go to the head security officer or their chief of police,” Maxwell said. Students will be more likely to report Title IX violations if they can do so easily without going to security.