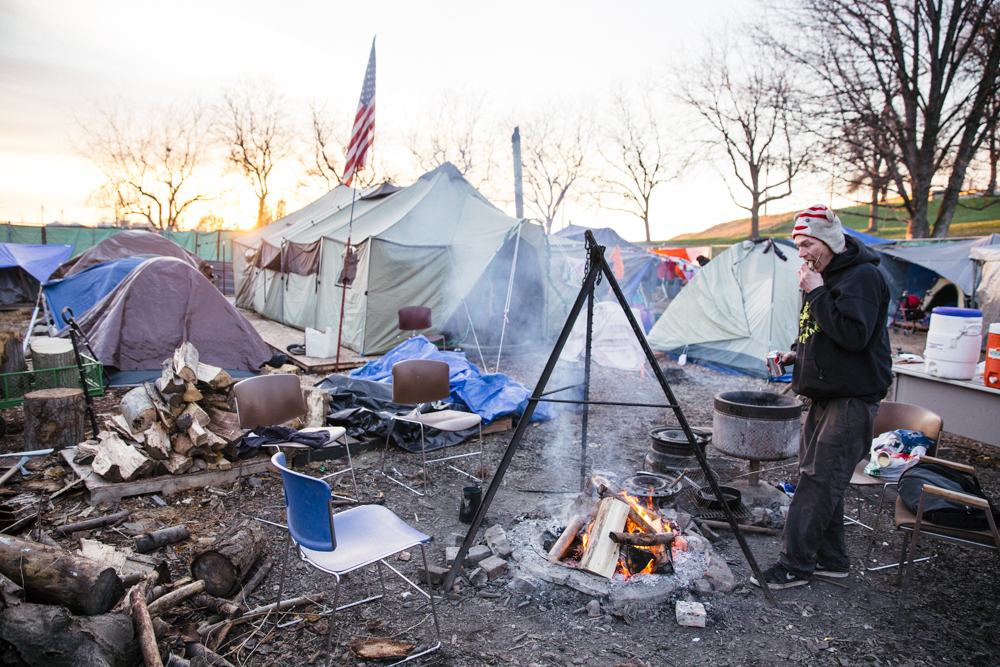 Getting off the road: residents of the Walla Walla homeless encampment spread positivity

Inside the “Getting Off the Road Homeless” Campground, campers are gathered around their fires as the sun slips below the horizon and the temperature drops. A man slices potatoes into a pan, remarking on his hunger as they fall into a sizzling pool of crisco.

A panorama of the camp. On right, at top of the hill, is the office for the Veteran’s Memorial Gold Course. Tywen Kelly
The city established the campground on land beneath the Veteran’s Memorial Golf Course in August of last year. During its tenure here, the camp has struggled with logistical difficulties, a lack of resources and the discontent from surrounding businesses. Come April, the city plans to relocate the camp approximately 50 feet to accommodate the construction of a replacement maintenance building for the course.

Though winter seems to be sliding into memory, the camp’s population reflected on conditions are still far from ideal. At its peak, the camp hosted as many as 50 homeless people. About 20 live there now, but in the cold of January that number fell to a mere eight.

“I’ve never been that cold in my life,” a camper named Christi said.

Despite the frigid Walla Walla winter, the group managed to stay warm while remaining outdoors. 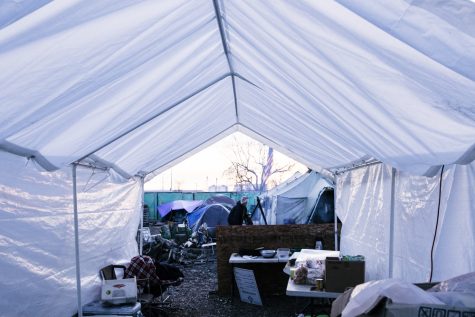 Tywen Kelly
“The tents have tarps and stuff over them. Some people have heaters here, some people don’t. The ones that don’t, you can get a bucket of coals and put it on a cement floor … That’s what I do,” Christi said.

The camp was initially founded to service fundamental needs, and continues to exist for that purpose. When discussing their hopes for the camp, residents emphasized this fact and look to address it more completely.

“It should be more of a … not a camp, but a warming shelter,” Mark, a relatively new camper, reflected.

Though the camp certainly has progress to make, it has also improved dramatically during its short existence. Security was initially a serious issue at the camp, but the situation is improving.

“They [campers] appreciate being able to go to sleep and not having to have a weapon… Some guys did have to do that initially,” said Kathy Drake, a volunteer who has been with the camp since its inception.

Rules have been established to avoid this. Volunteers maintain a website that lists general camp rules and information. One such regulation states that “Violence, threats, and the display of weapons by residents are not permitted in the campground or in the vicinity of the campground.” However, enforcement of these rules has been inconsistent in the past. 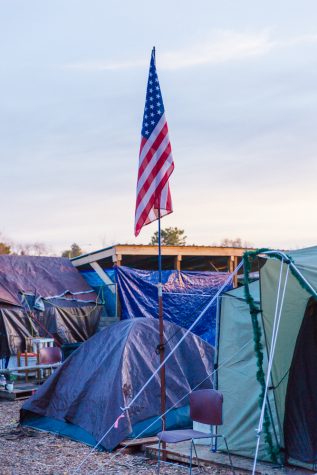 The American flag rests at the center of camp. Tywen Kelly
Recently, the camp voted on new leadership. All campers who are compliant with camp rules and have stayed for five or more days have a place on the camp council, which then selects officers to serve on the executive committee. Dan, a camper of three weeks and the newly elected president, remains focused on the camp’s basic purpose.

“I’d like to see everybody get out and do their own thing … get housing or whatever they’re gonna do,” Dan said of his hopes for the camp.

He looks at the camp as a transitional solution for himself too. Dan has been looking for work, but hasn’t had luck yet.

“It’s hard to find a job because almost nowhere nowadays does applications in person, it’s all online. It’s much easier to find a job when you apply in person. I got probably 50 applications out on my phone … ain’t heard back from none of them,” Dan mused.

Dan’s situation is far from uncommon. Experts recognize how difficult it can be for the homeless to find employment and promote a more supportive solution.

“A housing-first approach is what will make a difference locally,” Noah Leavitt, Whitman Associate Dean for Student Engagement and Chair of the Walla Walla Council on Homelessness, wrote in an e-mail to The Wire.

“In addition, while it is true that some people who do not have stable housing are able to maintain some degree of paid employment, having paid employment options for all people can help individuals move from homelessness toward more secure and stable living situations,” Leavitt continued.

Each individual has their own way of coping with homelessness. For him, Mark focuses on the positive elements of life.

“My goal everyday is to make ten people smile, while that’s easy … This is one scenario of mine that just happened: I’m smoking a cigarette at Walmart, waiting for a friend to come out. I see a lady and her daughter, the mom madder than heck at her daughter, just barreling down–daughter’s in tears. As I see mom get up and get ready to go, I say, ‘Excuse me ladies, are you sisters?’ Smiles, all the way to the door. See that’s a smile that’s hard to get: someone’s in a negative, but if you can make ‘em smile through all that … It’s worth my day, that’s for sure.”