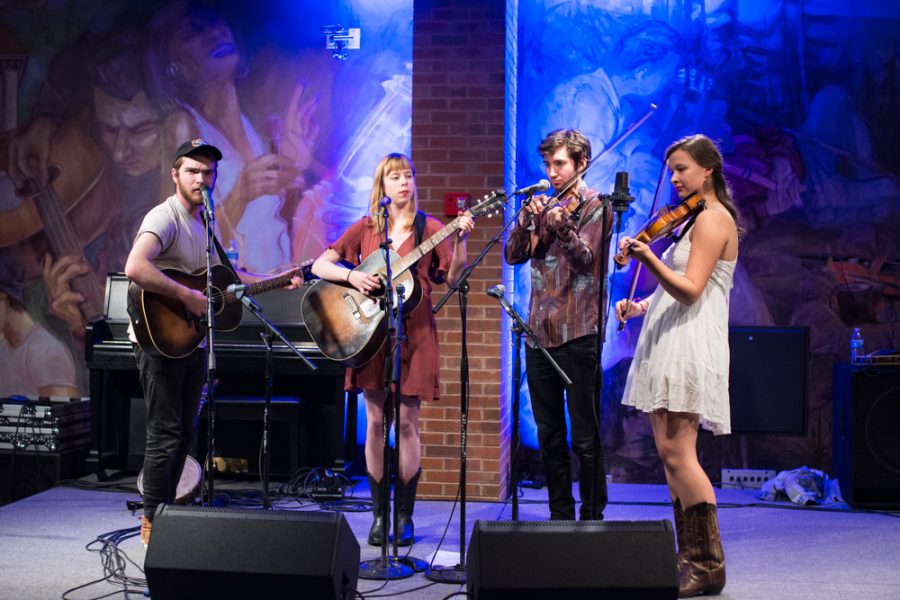 The Onlies performing in the Reid Coffeehouse

The One and Only Onlies

As the Onlies took the stage with their fiddle-fronted old-time and country music on Friday, March 30, Reid basement filled with students ready for an evening of lively performance. 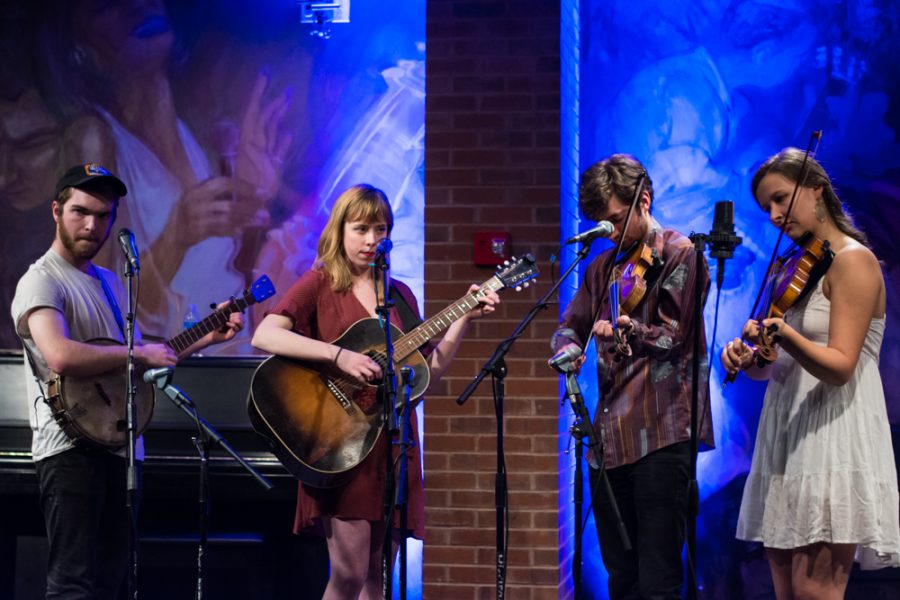 The band is composed of four college students – one being Whitman’s very own Sami Braman ‘20. The rest are Riley Calcagno from Oberlin College and Conservatory, Leo Shannon from Warren Wilson College, and Vivian Leva from Wafford College. The original trio – Braman, Calcagno and Shannon – became friends at the age of two and have been playing music together ever since. Leva is a more recent addition to the band; she joined them after they became acquainted at a folk festival.

Braman described how the Onlies grew from playing casually as a band to performing at a professional level.

“We used to busk at this festival called Folklife and put out a little guitar case for money,” Braman said. “Then we finally got to play at a big stage at that festival one year when we were in fifth grade – that was the real deal. From then on we’ve been playing together. When we went off to different schools, we decided to take a little break from playing with each other only because we would be across the country, but when we’re together over the summer we love to play.”

Braman added that when the original trio began playing with Leva, they discovered that she brought a new sound to the band. This inspired them to bring her on as a full-time member. Leva talked about her own musical background.

“Both of my parents were musicians growing up – they were professional musicians so they wrote and performed songs,” Leva said. “[My parents] were in a duo together, playing old-time and country music, so I just grew up playing and going to fiddle festivals on the East Coast.”

The Onlies’ music comes from a mix of influences with predominantly old-time American themes, but with the addition of Celtic and Canadian roots. While the fiddle is prominent, they combine it with the banjo, guitar and mandolin to capture a Northwest vibe that has garnered them significant attention in Washington, Oregon and California. Shannon spoke about what influenced their distinct style.

“Riley’s and my dads played old-time music, so it was in the air growing up, and so it was a very familiar sound from being around it so much,” Shannon said. “There was a festival north of Seattle called Fiddle Tunes, which we’ve all been going to for a really long time. It introduced us all to playing traditional music with each other.”

Braman added, “We’re all into other styles of music as well, but together we love the sound that we make when we play old-time music so that’s kind of how we got our sound. For a long time the Onlies would play Irish tunes or other [European styles]. We’ve had other styles represented in the past, but we’ve realized that we love this style together.”

The performance in Reid was met with applause, and save for an unfortunate incident with a banjo, their professionalism and joy with which they approached the music made the evening all the more fun; many of their songs leaving the audience dancing in their seats. The Onlies, despite their geographical distance from each other, continue to be a band to look for, and their music provides a style reminiscent of late nights in old saloons with bat-wing doors blowing open with the wind.