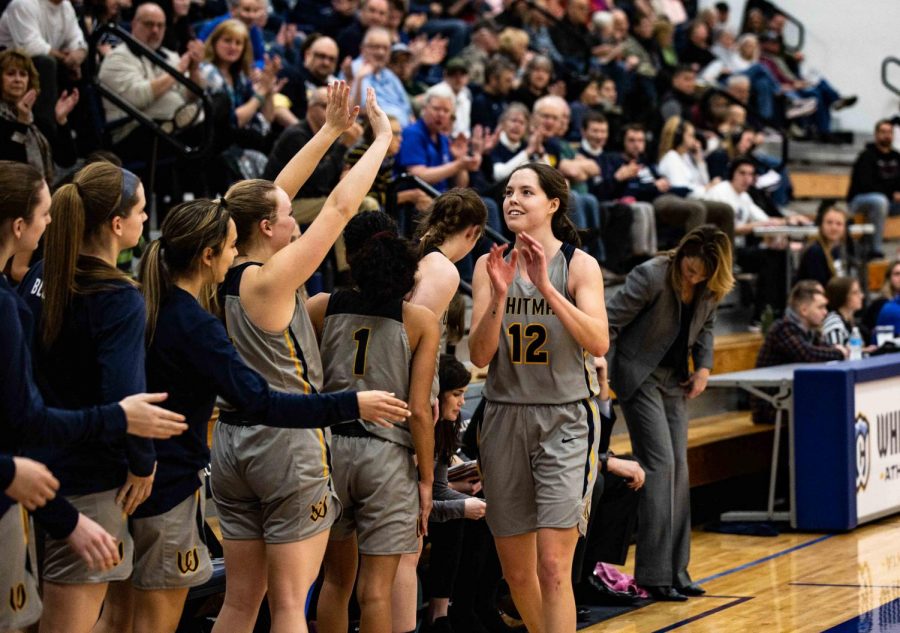 The Whitman College women’s varsity basketball team claimed the title of Pacific Northwest Conference champions this past Valentine’s Day, but their work is far from done.

Senior Natalie Whitesel acknowledged the role their current success will have in shaping the team’s fate, listing a few goals that the team would still like to achieve.

“For now, we are focused on getting better every day and winning the next game because that’s what matters most,” Whitesel said. “Above all we want to have fun doing what we love and be the best team that we can be, and if we can do that then everything will fall into place.”

So far, things have been falling into place for the Lady Blues. With 12 wins and only one loss, the team is looking to advance much further than the conference tournament.

First-year Macy Hampton elaborated on the importance of taking care of the job at hand and carrying their success into future games.

“We take it one game at a time but we ultimately all want the same thing and that’s the national title,” Hampton said.

Recently, the Lady Blues rose through the ranks, placing them at seventh in the nation for Division III. However, a solid ranking and a conference title was not enough to satisfy the team’s hunger for a bid in the national tournament.

“I think I can speak for the rest of the team when I say we’re not content with being [No. 7] in the nation, nor will we ever be,” Hampton said.

Senior Mady Burdett concurred with Hampton, emphasizing how driven the team is to climb the ranks even further.

“This gears our mindset to not give in and to not settle because we are never satisfied until we win the National Championship,” Burdett said.

Despite not making the national tournament last season, the Lady Blues have had a successful season thus far. They are using their disappointment about their previous season to fuel this season’s fire.

“Last year, not making the national tournament was a wake up call for us,” Whitesel said. “This year we came in with a chip on our shoulders, and if you ask anyone in the program there is no way that we are going to put ourselves in that position again.”

Whitesel continued to attribute the team’s success to their strong relationships.

“I think the connections that we’ve made off the court, and the love and respect that we have for each other, really shows on the court and genuinely makes us an even better team,” Whitesel said.

Even as a first-year, Hampton learned what kind of dedication is required to be part of one of the best teams in the nation. Stepping onto a team who is already successful to begin with is intimidating as is, but it’s the commitment from each player that has shaped the team into what it is today.

“What’s contributed to the team’s success is not only the amazing coaching staff we were blessed with but the individual commitment of our players to give it their all every day,” Hampton said.

Burdett elaborates on Hampton’s feelings of commitment and the process of shaping such a successful team.

“Establishing a strong foundation has been key to building our team chemistry and making sure that everyone is on board and on track with our goals,” Burdett said.

After winning a conference title, it is clear that the Lady Blues are on track with their goals. Fans await to see if they will carry on their success and eventually make an appearance at the national tournament.