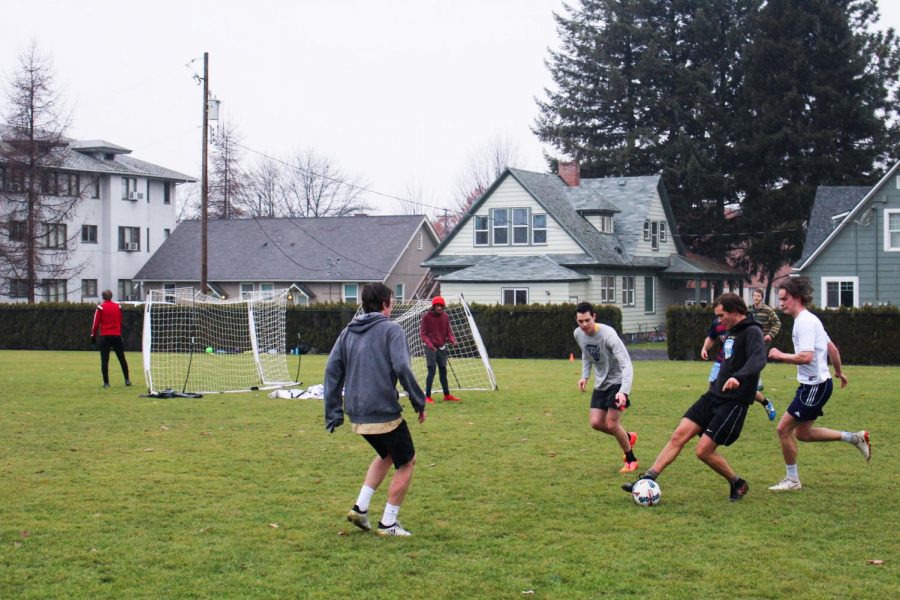 Many athletes who have been training for years to perfect the skills necessary to become experts in their sport play in the varsity league. Meanwhile, people with an interest in a specific sport who want to learn how to play better often join club sports. There is, however, a league for people who simply want to have a good time with friends and play causally: intramural sports.

This season of intramural sports welcomes the return of soccer, with teams of 11 playing against each other to see who will come out on top. The IM soccer league is run by junior Quinne Woolley, who is also a member of the women’s varsity soccer team.

Woolley, who is unable to play IM soccer herself because it against the rules for varsity athletes to play in the IM version of their varsity sport, believes IM soccer is a great way to meet new people on campus.

“The teams are large, so a lot of people are on the field at once, socializing, underclassmen meeting upperclassmen, etc,” Woolley said.

IM games are played on various days of the week, depending upon which sport is in season. Soccer, for example, is played on Saturdays and Sundays. Matches are played on the football fields near Harper Joy Theater, giving the players space to accommodate their soccer nets.

While many varsity soccer athletes have been playing soccer most of their lives, intramural athletes may not have had as much experience. Some may not have even kicked a soccer ball before their first practice. This is what makes intramural sports especially popular for first-year students who are still adapting to college life and are looking to get involved with activities on campus.

This is first-year student Katie Jose’s first year playing intramural soccer, but she has already made lots of memories with her teammates. She has had so much fun that, even after losing spectacularly, she was still able to laugh about the game.

“One of my favorite memories is losing 18-2 with my teammates,” Jose said. “We had fun and that is all that matters.”

This new season of intramural soccer has also seen changes to the set up of the league system, said Woolley. Previously, teams were split into division one and division two; however, with only a combined total of ten teams, officials decided to merge the divisions together. This not only means players get to compete against a wider array of teams, but it also increases the emphasis on having fun rather than working toward moving up a division.

This more casual format works well for first-year Libby Hetzel, who says that IM sports are good for people who want to be active and stay fit on campus, but do not want to commit to weekly meetings at club level. IM soccer is low-commitment; players do not have to participate past a single season. This relaxed attitude toward sports is attractive to people who may not have experience playing competitively. Hetzel loves playing IM soccer because there is no pressure to perform like a professional.

“When my team scored our first goal it was very exciting (and pretty unexpected),” Hetzel said. “It is a great way to get exercise and enjoy the sport without feeling too much pressure to perform or making a serious time commitment.”

There are nine different sports in the intramural program hosted annually. So far this year, the college has held football and tennis. Currently in season are basketball and soccer. Next semester, there will be volleyball, ultimate frisbee, table-tennis, softball and dodgeball. Anyone can form a team and get involved by signing up through a link on the Whitman College website.