The reality of international travel for varsity teams 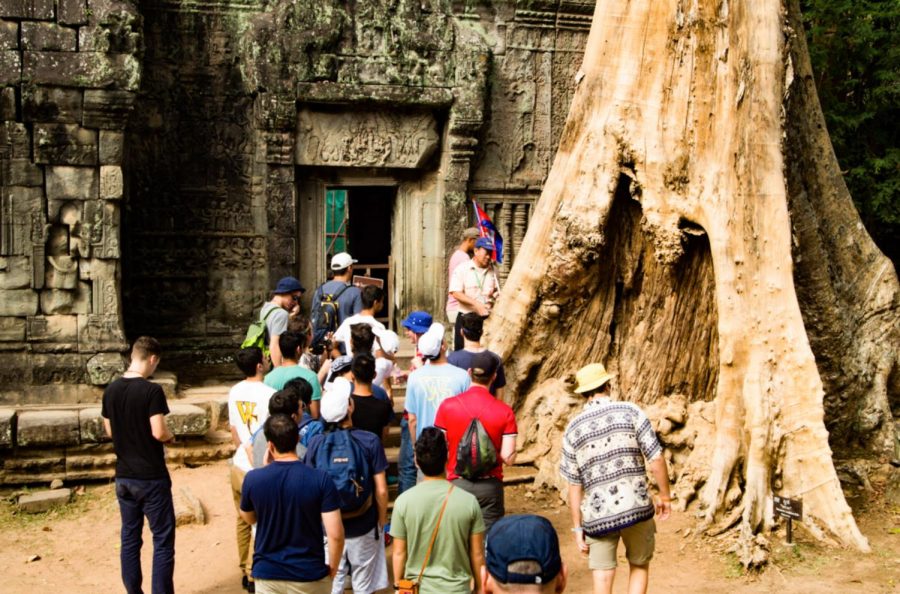 The men’s tennis team took a trip to Cambodia in the spring of 2018. Photo contributed by Gary Ho.

For Whitman’s varsity athletic teams, international travel has been an important part of team development. This additional opportunity for play makes a positive impact on athletic teams – not only for gaining practice, but also in terms of becoming a more cohesive unit.

In August of this year, the Blues’ women’s and men’s soccer teams traveled overseas to begin the season, playing in England and Portugal, respectively. However, there have been a few unknowns circulating about what the future of varsity international travel may look like.

It has been commonplace for Whitman varsity athletes to go on an international trip once during their four years. However, senior guard on the women’s basketball team, Natalie Whitesel, shares some uncertainty of her team’s prospect of traveling internationally.

“There is some concern amongst athletes that not everyone will be able to go on an international trip in their four years at Whitman,” Whitesel said.

Whitesel understands it is mostly a funding issue, as money for varsity international travel comes from an endowed fund and there is only so much that is able to be dispersed.

“The W Club does a lot to fund athletics, and we appreciate their support unconditionally, but their funds are limited,” Whitesel said.

As student-athletes are unable to receive financial aid for international team trips, the issue of funding can quickly become complicated.

“Most teams have to fund a significant part of their trips with their own budgets. Therefore, some teams are finding that there isn’t enough money to spend on such trips, while others are making it work,” Whitesel said.

Whitman’s new Athletic Director Kim Chandler, who took over in June, clarified the issue of international travel for varsity teams.

“Every team will have an opportunity to make a request to access those funds,” Chandler said. “Certainly I think it’s fair to say these trips have only continued to get more costly, and so it does take time and planning for these things to happen.”

Not only is it a matter of funding, but travel also depends on the each team’s coaches’ opinions on international travel and what it can do for their team’s development. On a school-sponsored trip the team must compete during the trip, per the NCAA. This narrows down travel options for certain sports due to limitations finding competitions abroad.

“Some coaches may request international travel, and some may not just simply based upon the fact that it may not have the same impact towards their team’s development,” Chandler said.

While there have not been any policy changes towards international team travel, issues with funding and logistics complicate the situation. A significant part of the problem also lies in a disconnect between what is said during athlete recruitment and the reality of the situation.

“The biggest issue, in my eyes, is that there is a disconnect between what student athletes are told when they are being recruited and when they arrive on campus about expectations for their four years, often including an international trip, and the reality is that not all teams or student athletes end up having an experience that meets those expectations,” Whitesel said. “It is complicating Whitman’s idea/selling point for athletes that they will go on an international trip in their four years.”

Ultimately, international trips are very much enjoyed by and beneficial to varsity teams. Whitesel spoke of her team’s trip to Hawaii as a first-year.

“We won two games against West Region opponents and ended up going to the Elite Eight that year. I’m not saying there is a direct correlation here, but we definitely had a strong bond as a team off the court that helped our success on the court,” Whitesel said.

Women’s tennis coach John Hein knows there are many benefits for varsity teams to travel abroad, which he saw firsthand when the Blues’ tennis team traveled to China over spring break this year. Coach Hein believes that traveling as a team allows interaction with other cultures in a unique way compared to just traveling individually, especially when teams can interact through the medium of sports.

“To do that as a team adds another layer of both team building and having that experience together – which is positive for the team but also is a different way to interact with different cultures than just individually going somewhere,” Hein said.

International travel for varsity teams will continue into the foreseeable future. However, increased transparency during the recruitment process could prevent hopes from being dashed and provide incoming athletes with realistic expectations.