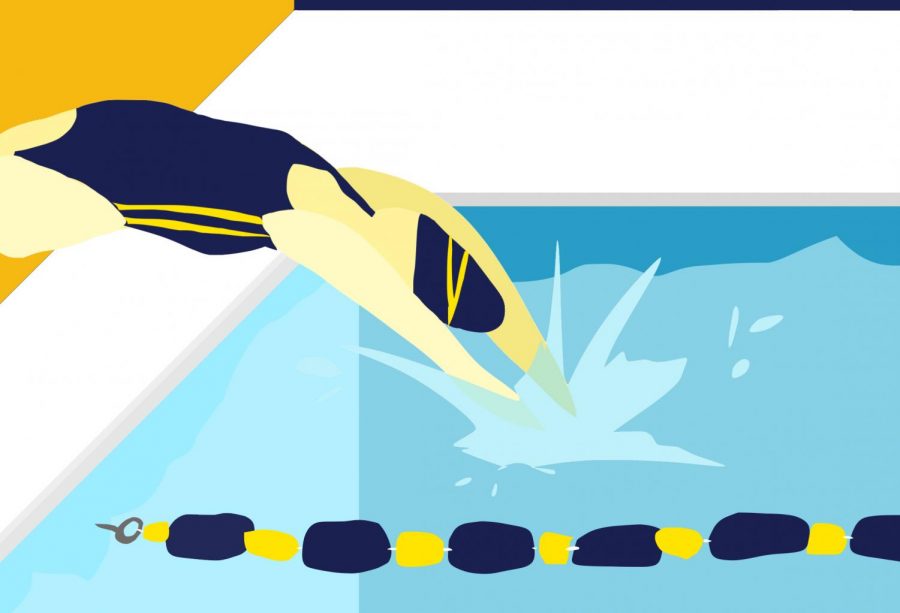 The Whitman swim team’s reputation can be summed up in one word: fast. Despite only having had two meets so far this season, they already have a good chance of winning this season’s Northwest Conference Championships.

On Saturday, Nov. 2, both the men’s and women’s teams competed against George Fox University, coming away with numerous wins in the large array of races completed. The Blues swept the board in the 400 medley relays with Ashley Joe, Shea Tsuha, Zoe Hill and Mara Selznick winning for the women’s team with a time of 4:10.56. Peter Fitch, Aidan Laird, Michael Chang and Fisher Munro came in first in their race with a time of 3:41.59 for the men’s team.

Fisher Munro, a senior and participant in the medley and butterfly races, spoke about how well prepared the team was prior to the meet.

“A ton of training goes into the prep for a big competition,” Munro said. “The entire season, swimming everyday except Sunday, sometimes twice a day plus time in the gym, leads up to conference.”

The Blues swim teams have a longer varsity season than other sports, with their season running from September until February (or March if they make it to Nationals). Despite this grueling schedule, each member of the team puts all their energy into their races and approaches meets with as much hunger for victory in the dual meets as they have for the upcoming Northwest Conference Championships.

For the first-year students on the team, this meet was a chance to demonstrate the skills that led them to be selected for the team. For Munro, a highlight of the meet was seeing first-year student Tanner Filion compete in the 200-yard backstroke.

“[Filion] has been swimming well in practice but the time he went was ridiculously fast,” Munro said. “He has been the best in the conference this year and only two seconds off of the team record in the very first meet.”

A partial reason for the successes of both teams can be found in a meet’s atmosphere and supportive crowd. Bloor was especially impressed with how electric the meet felt, despite it being an away competition.

“There were parents and alumni there which really boosted the mood since it was an away meet,” Bloor said. “Having an equivalent to a home crowd is always a good boost.”

The women’s team also worked well together in their meet versus George Fox. They dominated the podium of the 1000 meter freestyle with Annika Hobson, Lauren Olson and Abbey Felley being awarded first, second and third respectively. The women were also victorious in the concluding race of the meet, the 400 meter free relay.

For sophomore swimmer Annika Hobson, meets like these are a rewarding opportunity to put into practice all the skills she has perfected during the long months of pre-season training. She especially enjoyed the longer races that really test her abilities.

“I am a distance freestyler and my favorite race is the 1,650 freestyle,” Hobson said. “The 1,650 freestyle can be a tough race, but it is worth it due to the sense of accomplishment that I feel after racing as fast as I can.”

The next meet for the Blues will be a home competition against Willamette at 6 p.m. on Friday, Nov. 15.