How to successfully connect with alumni: A demonstration by the Whitman Blues 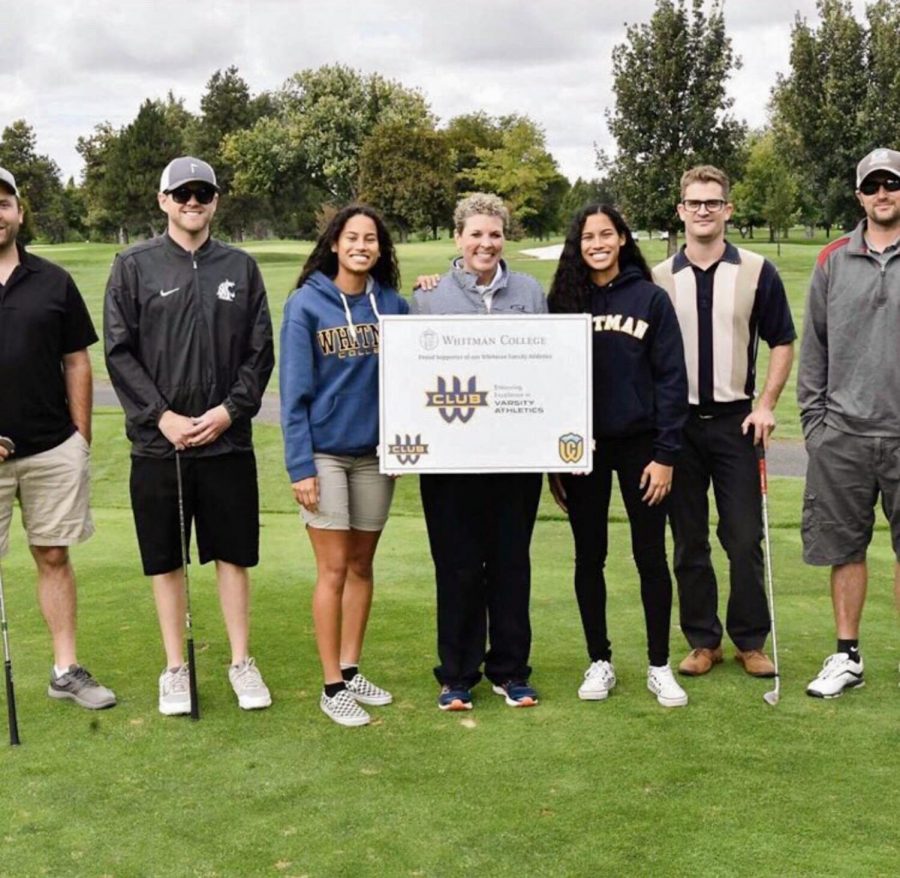 On Sept 20, Whitman alumni came together with one goal in mind: to absolutely annihilate each other over a pleasant game of golf. The alumni were accompanied by singing, dancing varsity athletes who were repping the modern-day Blues and providing the less competitive alumni with some casual conversation.

This unification of Whitman athletes in one place could mean one of two things: either the Blues were about to play their greatest rivals in a ‘fight to the death’ game of soccer, or it was time for the 10th Annual W Club Golf Tournament.

Varsity athletes were paired up to man a different section of the course. They then spent time sharing stories with alumni about the current antics Whitman students have gotten up to and how that compared to the experiences of the alumni.

“I enjoyed simply talking with alumni about their experiences during their time at Whitman as well as the different paths they took after graduating,” Nevoso said.

The event was formatted so that there was a course consisting of a four-man scramble followed by numerous other single-hole competitions such as the ‘Longest Putt’ challenge and the ‘Closest To The Pin’ challenge. It was a time for alumni to come together and share memories from their Whitman years (for some, the days when the TV was in black and white, and the only way to text was through verbal conversation).

The purpose of the tournament was to raise funds for the W Club, an organization that helps support Whitman Athletics. The Blues community is close-knit and values representing the college to the best of their ability. This is why the work of Whitman’s alumni to support their former teams is so important to them.

Sarah Michelson, Class of 1982 and member of both the W Club and the Golf Tournament committee, had fun talking to athletes who don’t play her own sport of golf.

“As an alumna, I enjoy getting to meet varsity athletes other than the golfers who I know, and I think other alumni feel the same,” Michelson said.

The presence of the varsity athletes wasn’t just important for the alumni. It also offered the Whitman sport fanatics a chance to learn more about the history of their teams. Whitties have been playing sports since 1882, and while it would be surprising if a member of the original class showed up to the golf tournament, there have been a lot of changes that are important for players to know. They are able to do this by attending events put on by the W Club that offer more than just a chance to stay physically fit.

First-year Shaira Young and her twin sister Caira Young both attended the events as representatives of the Whitman women’s basketball team. They teamed up to get to know the alumni as they arrived at their station.

“The purpose of us varsity athletes volunteering was to engage with the community and connect with alums,” Shaira said.

Both girls were stationed at the ‘Hit and Circle’ challenge, a game in which competitors had to hit a ball into a circle on the green, explaining the rules before socializing with the alumni as they made their attempts at golfing greatness.

For all of the varsity athletes, the tournament was invaluable for their progression as players and offered them a chance to give back to the Blues community that has welcomed them with open arms.