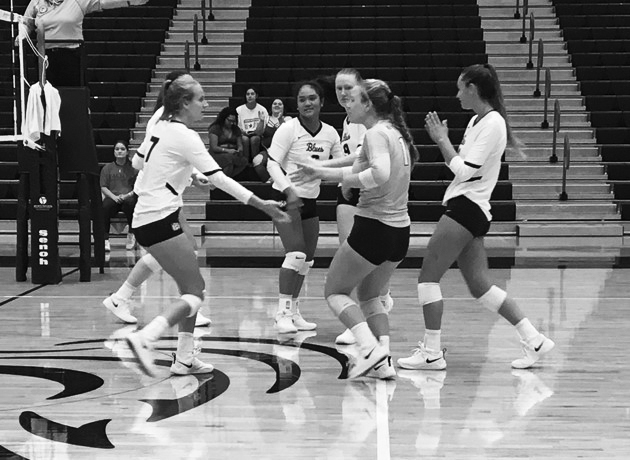 The women's volleyball team comes together to close out their win over the Banana Slugs. Photo courtesy of Whitman Athletics

Whitman’s volleyball team had an eventful weekend in Southern California playing against schools from across the nation at the Cal Lu Fornia Invitational. After a quick flight from Walla Walla’s infamous airport to Seattle, then a 3 hour flight to LAX, and a drive through L.A traffic they finally reached their destination. The long trip surely allowed the team enough time to bond. Sophomores Kalli Dickey and Ruby Matthews reflect on their favorite bonding activities that they have implemented in the past year. “My favorite team bonding activity is when we travel to games and we get to play music and jam out in the car,” Dickey said. “My favorite team bonding activity is our pregame locker room dance parties, no doubt,” Matthews recalls.

The Blues game against University of California Santa Cruz was definitely one to watch. “Our last game in Santa Cruz was a great game. It challenged us and made us play to the best of our abilities,” Dickey commented. Sophomores, Claire McCarthy and Ruby Matthews, reflected on this weekend’s learning curves by recognizing team unity as the team’s strongest attribute. “Against Santa Cruz, our last match of the weekend, the team came out together and took care of what we needed to take care of. I think the match, especially in the last ten points of the third set, ignited a spark in each of us that really got us motivated to get back into the gym to prepare for the weekend’s matchups,” McCarthy said. “It tested our ability to trust one another and show that if everyone does things we can be really great team,” Matthews added.  Although they did not beat Whittier College, the team played as a whole to bounce back on the final day with a win against University of California Santa Cruz earning a 1-3 record.

This upcoming weekend Whitman will be hosting Lewis and Clark on Friday, September 14th, at 7pm, and Willamette on Saturday, September 15th, at 5pm. “I am excited to have our seasons opener be a home match. It should be a good game, every team in our conference this year is really competitive and hungry for the conference title,” Matthews commented. “We have nothing to lose and everything to prove and like I said before, I believe that with our talent and team chemistry, we can accomplish some amazing things this season,” McCarthy said. Now that the Blues are back home in Walla Walla they are ready to divide and conquer as conference approaches.