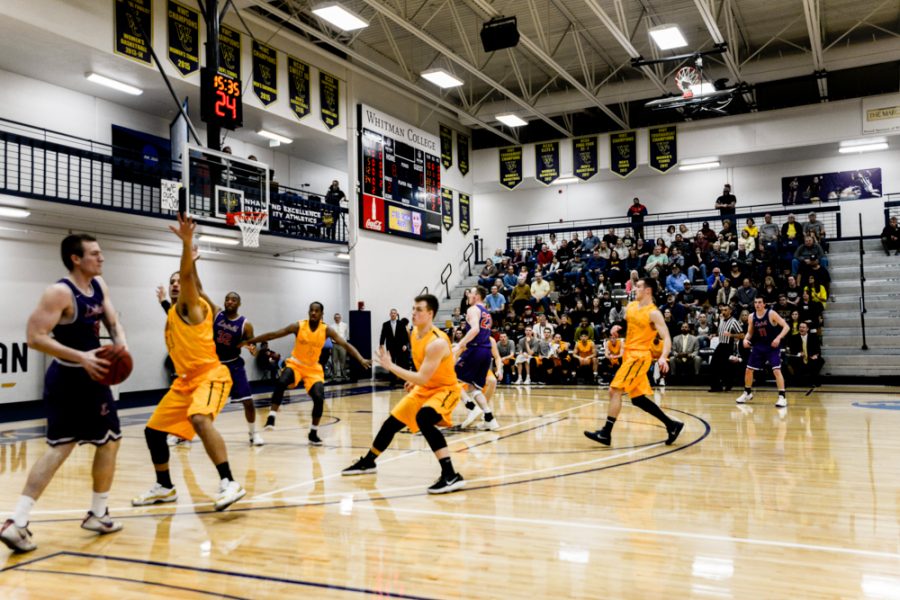 With just two more games left in their regular season schedule, Men’s basketball has accomplished an extraordinary feat for the second season in a row; they are the only undefeated team left in NCAA basketball. Whitman’s win last week against George Fox (their 38th consecutive regular season win) brings their record so far in 2018 to 23 wins and zero losses. With just two games left in the regular season, the Blues are looking to live in the moment, while preparing for what should be an exciting postseason.

Head Coach Eric Bridgeland is optimistic about the trajectory of the season. “I think we see only opportunity,” said Bridgeland when discussing the games ahead. “Our guys’ unbelievable focus on what’s in front of them, and without question their unmatched spirit and togetherness [makes all the difference in competition].”

The role of teamwork is something that other Blues players agree has helped them on their road to the Northwest Conference Championship. Junior Wing Cedric Jacobs-Jones emphasized team unity as a crucial element to Whitman’s success this season.

“I feel like what sets our team apart from others is just how much of a family we are… I can truly call each one of these guys family and count on them for things on and off the court,” Jacobs-Jones said.

While the spirit of the team has undoubtedly helped them so far, the Blues are also dominant in other aspects of the game, bringing tenacious defense, a high scoring offense, and depth to the court, as junior guard Joey Hewitt explained.

“Defense has definitely been an emphasis for us this year. Our full court press is our identity, but we’re so much more than just a pressing team. We have improved our half-court defense immensely throughout the year and I feel like everyone on our team can guard and shut teams down on the defensive end,” Hewitt said.

With opponents averaging a mere 76 points per game, in addition to Whitman forcing 16 steals per game, it is no surprise that defense has been a massive contributor to the winning streak.

In addition to the impressive defensive statistics, Whitman’s offense is putting up 101 points per game, with an impressive 48 percent shooting percentage from the field. So far the Blues are not just shutting down teams with their full court press, they are also knocking down almost half the shots they take.

With just two home games left in the regular season, the Basketball team will be able to enjoy the home court advantage to close out conference play. Senior Guard Tim Howell mentioned how important the Whitman and Walla Walla communities are in motivating the team to victory.

“The fans are everything. The energy of the crowd is what sets the tone for the game. I personally love having our student and community fan support. It helps us as a whole to play better knowing we have people that are there to support us on our journey” Howell said. “Our whole team appreciates all the fans and the support we receive every home game and we just want to say thank you,” Hewitt added.

Howell, who was a first team All-American last year, is also in the middle of his last season as a senior, making this championship run even more significant. “This will be my last time playing basketball at the collegiate level so I am just trying to take it all in and enjoy every moment that I have playing and enjoying this amazing journey that I am on with my brothers and coaching staff on and off the court. I’m going to put it all on the line and try to go out and get this championship as well,” Howell said.

While the postseason should bring plenty of exciting Whitman Basketball, the team remains focused on taking each game one at a time and enjoying the ride. “We enjoy each other and the journey to the max,” Coach Bridgeland said.

With the postseason fast approaching, Whitman fans can expect to enjoy more fast paced, high energy basketball from the only undefeated team left in the NCAA. Jacobs-Jones captured the team’s enthusiasm, saying, “I would like the Whitman community to know that, we love representing everyone and we hope that you follow us into the postseason because we are going to make it one for everyone to remember.”