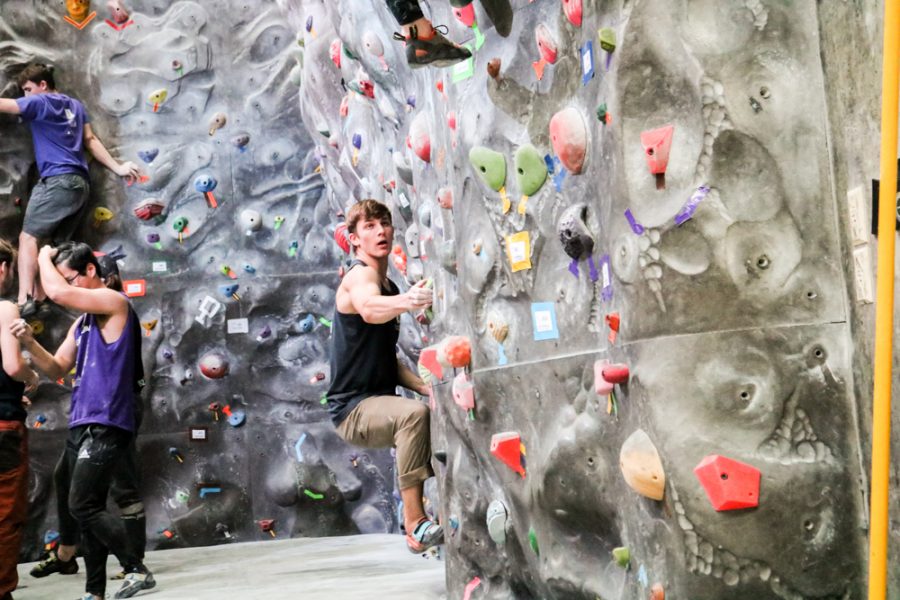 Last weekend was the climbing team’s first competition of this year’s Northwest Collegiate Climbing Circuit (NC3). For the first competition of the year at Western Washington University, Whitman exceeded expectations. Three climbers made it to the final round of the competition, including Mackenzie Kuller, Raquel Peterson and team captain NoahLani Litwinsella.

Each climber receives a score for the first round of the competition based on the top five scores they receive. To get the points for a climb, a climber must complete the climb from start to finish (this is called red pointing the climb). If a climber completes a climb on their first attempt they receive extra points (a flash bonus). At the end of the first round, the three male and three female climbers with the highest score move on to an on-sight finals round. The team was just points away from having all three female competitors be Whitman students.

Litwinsella has been a captain of Whitman’s climbing team for the past three years, and has been climbing for a lot longer than that.

“I love being a part of the Whitman Climbing team,” Litwinsella said. “It is an awesome community where people who have been climbing since they were kids and people who are brand new to the sport cheer for each other and help each other to complete climbs.”

Sophomore captain Walker Orr enjoys the community aspect as well. “It is casual enough to be a wonderful community, but also very competitive. You can make it whatever you want it to be,” said Orr.

The competitive nature of the team is what drove them to success in their first competition, and what will continue to drive them to improve as the season progresses.

“I think we have a very good chance of going further than any Whitman Climbing team has ever gone, both individually and as a team, this season,” Litwinsella said.

Climbers score points for their teams based on what place they finish in, with first place earning 10 points, second place receives nine points and so on. With each competition broken up into six categories, a school can receive points for up to two of its athletes in each category. This makes having a large team very crucial, and very helpful in giving the team more overall points. The fact that Whitman, being a school of under 1,500 students, can be competitive with schools like the University of Washington, Western Washington, Central Washington, University of Oregon and Oregon State, is a huge accomplishment.

A huge part of their success in the past and so far this season can be attributed to the team’s tireless work ethic in practice. The team holds around eight practices per week so that it works with as many people’s schedules as possible. The team does climbing practice twice a week, along with yoga, core and conditioning workouts.

“Climbing is a sport that necessitates both mental and physical strength. The best way to get good at climbing is to climb, but it is much easier on your body to build strength doing conditioning in the gym,” Litwinsella explained.

“You can spend as much or as little time in the gym as you want. That’s what is so nice about it, you can choose how much time you want to commit to improving. That is what draws so many people to climbing because it works with your schedule,” Orr said.

Spending hours upon hours a week grinding together in the gym has brought the team closer, but weekly road trips are really what have formed strong bonds. Every travel weekend, the team usually spends nights at a teammate’s or family member’s house, according to Orr. They hang out, play games, and prepare for their weekend of competing.