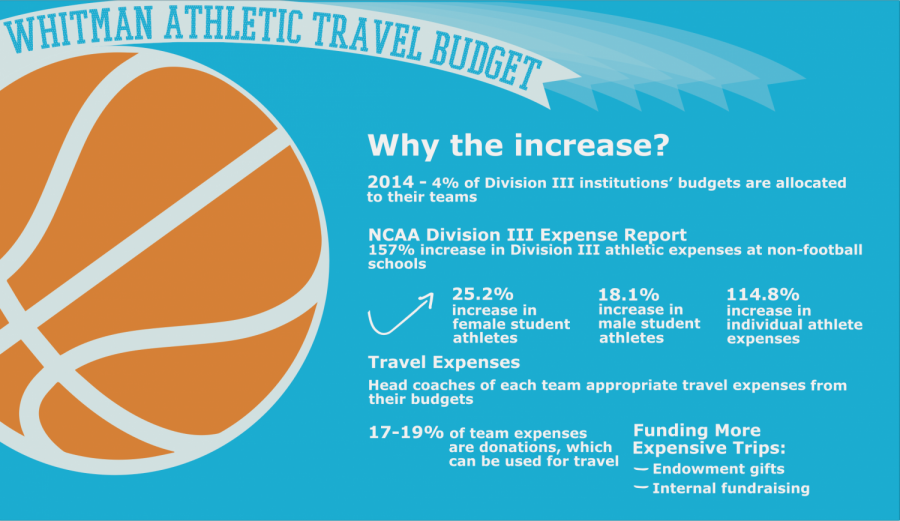 On any given weekend, an avid Whitman Blues Athletic fan can venture to the court or the pool or the fields around campus to see a sports team in competition. Training can be observed in a similar fashion, with athletes being spotted running, swimming, throwing, hitting, or training in their respective domains. Yet, on occasion, these on-campus routines are interjected with travel to and from competition, or for the potential exotic training trip to Southern California or Hawaii, or even perhaps Costa Rica.

The multitude of away games, matches, and meets in the Pacific Northwest as well as the larger trips spanning multiple states, if not countries, may seem to be spiking the expense report of the college’s athletic department.  While this trend in increased spending is seen across Division III athletic programs, there is also additional funding from beyond the college’s budget.

Division III athletics has a tradition of allowing students to balance their athletic passions with academic workload. Therefore, there is an absence of athletic scholarship offered at NCAA Division III schools, less commitment required from its athletes, and relatively fewer resources funded by the colleges.

Consequently, schools with Division III programs have less of an obligation to invest in their athletic programs. As of 2014, the median funds NCAA Division III teams receive from their respective institutions is only four percent of the institutions’ total expenditures. Yet, on average, the athletic budgets have had to be adjusted for greater numbers of athletes as well as a greater emphasis on expanding the opportunities for each of the teams through more diverse competition and training conditions.

In 2015, the NCAA published a Division III expense report, spanning the years from 2004 to 2014, studying the changes, allocations, and disparities in athletic expenditures between football and non-football schools, men’s and women’s teams, and private and state programs.

Over the past ten years, there has been a 157 percent increase in country-wide Division III athletic expenses at non-football schools. This increase in expenses can be attributed to both the increase in the number of student athletes, with female student-athletes increasing by 25.2 percent and males increasing by 18.1 percent, and the increase in expense per individual athlete, that has increased by 114.8 percent per athlete for non-football schools. The study also showed a disparity in budgeting depending on sport.

Whitman College remains consistent with these ratios of expenditure, with the Men’s and Women’s Basketball team’s’ expenses making up 24 percent of the total athletic expenditures out of the 15 varsity athletic teams. In terms of their travel expenses for competition, the head coaches of each team are responsible for divvying up their allotted budgets. For larger trips, teams are either gifted an endowment specifically for such ventures, or are responsible for raising additional funds themselves.

The men’s soccer team’s trip to England in 2006, the women’s volleyball team’s Hawaii trip in summer 2016 and the men’s basketball team’s Costa Rica training this past summer all received endowments for their travel expenses. On the other hand, the swim team’s winter break trip to Hawaii in January of 2017 was made possible through fundraising and dipping into their annual budget. Additionally, approximately 17-19 percent of team expenses come from donor funds, that can be put towards extra travel spending.

“Team spending is decided by the Athletic Director in consultation with each head coach to determine the specific program needs and in consultation with the VP of Development and Alumni Relations to ensure the fundraising portion is appropriate. The proposed spending ultimately needs to be approved by the Provost of the College,” Dean Snider, Director of the Athletics Department explained.