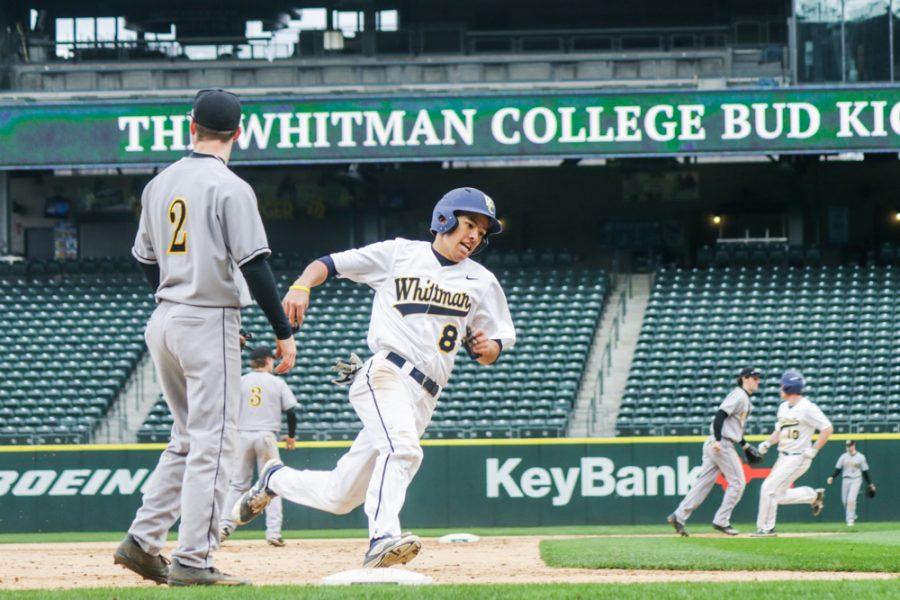 The pitcher’s mound at Safeco Field in Seattle contains a six inch by two feet slab of white rubber placed exactly 60 feet, six inches from home plate. In the 18 years of Safeco’s existence as the home of MLB’s Seattle Mariners, that rubber has hosted four no-hitters, two perfect games and countless masters of the craft of pitching. After last weekend’s Bud Kight Memorial Series, that list now includes several members of the Whitman baseball team.

Whitman played two doubleheaders with Centre College of Kentucky at the Mariners’ home field between March 4-5. The Blues split both the Saturday matchups, losing 4-2 and winning 3-1, and the Sunday games, losing 10-7 and winning 11-5. While the game results showed a mixed success, the opportunity to run the same bases, suit up in the same clubhouse and sit in the same dugout as MLB stars was one of the weekend’s main highlights.

“Everything we did became more valuable. Just warming up and stretching was one of the most important things I’ve ever done because that’s where Ken Griffey Jr. might have walked once,” junior pitcher and first baseman John Lyon said.

Not only did the games take place in a major league stadium, but the experience included all the features of a major league experience. Player photos and replays were displayed on one of the largest LED screens in the country, each at-bat began with personalized walkup music and the grounds crew dragged the infield every third inning. The first game on Saturday even featured two ceremonial first pitches, thrown out simultaneously by President Kathy Murray and Federal Justice James Robart.

After that, it was all action. The Centre College Colonels brought a previously undefeated team that, despite not being ranked, had garnered more than 20 votes in the Top-25 rankings prior to the weekend series. For past Whitman baseball teams that have struggled with stiffer competition, Centre would have been a handful. Instead, the Blues showed why they may be this year’s most improved team in the NW Conference, defeating the Colonels twice and narrowly losing the other two matchups. For Assistant Coach Tommy Richards and the rest of the coaching staff, results are not the most important measure of success.

“We’re really pushing as a coaching staff to focus on the process versus the outcome and detach yourself from the outcome as much as you can,” Richards said. “I felt like we got better pitch to pitch, inning to inning, game to game. Take the Safeco experience out of it and it was another chance to put hours in our logbook.”

Richards may have to add an asterisk to the hours logged at Safeco. For Lyon and the rest of the team, the experience is a springboard to a more confident group of players looking at an increasingly promising season.

We play better when we have more energy, we play better when we’re having fun,” Lyon said. It might have taken walking on a big league field to realize, but being in a place where everything you do is a memory you’ll have for the rest of your life and realizing you have to appreciate that all the time will definitely help us out going forward.”

Athletic Director Dean Snider, at Safeco in the midst of a whirlwind tour of the state to support different Whitman teams, pointed to a different kind of springboard.

“One of the ways it really helps our baseball program is it becomes a fabulous recruiting opportunity for us … Just to be able to have that as an opportunity to bring people together, to celebrate the college, it’s a great partnership,” he said.

Several other varsity teams hosted recruits at the stadium throughout the weekend. Between the Saturday games, food was provided for attendees in “The Pen,” a patio beyond the centerfield wall. President Murray and others addressed the crowd, which turned out to be the largest gathering of Whitman alumni away from the campus in school history.

Among those to address the crowd between games was John Stanton ‘77, Mariners CEO and majority owner. Baseball Head Coach Brian Kitamura ‘10 and Stanton coordinated to set up and organize the weekend. Stanton’s son Patrick is a junior pitcher on the team.

The series bore the name of Bud Kight ‘52, who passed away in 2015. Kight was a member of the last Whitman baseball team to win the Conference Championship and donated money to the athletic department, helping the baseball team bring teams from around the country and provide new challenges for the Blues.

If the team plays up to the potential it showed at Safeco last weekend, the Blues could be the new contender in the NW Conference.