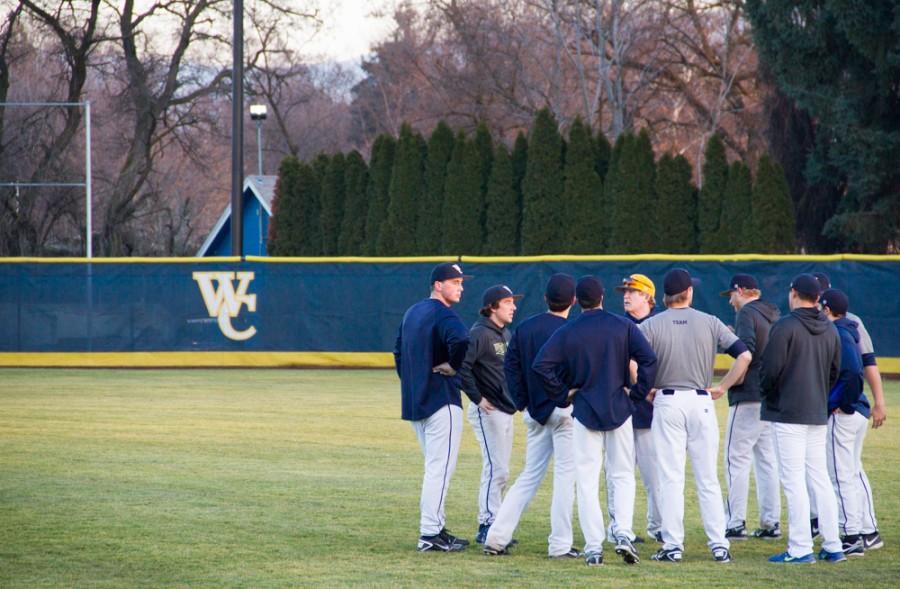 The Whitman Baseball team has played its first games of the 2016 season. Despite not being able to come away from the weekend with a win, the program is optimistic about the season.

This season is very different from the last several. Most notably, they have an entirely new coaching staff, starting with a new head coach. Coach Brian Kitamura was promoted from head assistant to head coach at the end of last year. Kitamura has been with the team for ten years, as both a student athlete and an assistant.

“It’s a privilege and an honor to be able to serve in this position and give back to my alma mater,” said Kitamura.

Kitamura has also brought on Bill Sizemore as a pitching coach, as well as BJ Holloway as the new infield coach. Senior Captain Robert Maislin has been pleased so far with how the team has adapted to this new coaching situation.

“The team seems like it’s really bought in to the new coaching staff,” he said.

The new team leadership has set its sights towards refocusing their goals for the team and its future.

“We’re really focusing on consistency, and raising the bar in terms of expectations…a completely new culture,” said Kitamura. “We are aiming for a lot more accountability from the coaching staff and within the team itself.”

The team is entering this season with the largest roster they’ve had in ten years —27 players. Out of these 27 players, 22 of them are underclassmen, an unprecedented number of young athletes with great potential for future growth. The young average age should be fruitful in terms of building depth for years to come.

Maislin spoke to the lack of older athletes, but also the strength of his younger counterparts.

“We lost a few important pieces from last year’s team, but we have guys ready to take over. [We have] several freshman who are going to start, and sophomores who are ready to take a step forward.”

Sophomore John Lyon also mentioned how his class and the one below it contributes to the team in a unique way.

“All of our new players are very hard-working and dedicated to the process and the results that will come from that,” said Lyon. “It’s also nice because it means that lots of young players will see the field as opposed to other schools where someone might be competing four years just to see that field a little bit senior year. We have a lot of young talent, and I’m excited to see how that talent actualizes itself this year and in the future.”

Looking back to his time since last season, Kitamura feels the team has had plenty of time to zero in on its goals for their 2016 season.

“Our offseason has been great. The best fall that we’ve had here since I’ve been here on campus in ten years,” Coach Kitamura said. “We have several great leaders, starting with our captains. With the young team, they’ve done a great job helping to prepare us for the upcoming season.”

Maislin agreed with his coach and sees the team pointed in the right direction.

“We are putting last season behind us, and are excited for this one. Team wise, our goal is to make it to the conference tournament, where our conference’s only guaranteed playoff spot goes to the winner,” he said.

In terms of what he wants to change from last season, Kitamura isn’t holding back. He has set his goals high, and is determined to see his team execute.

“We want to compete well at a high level,” Kitamura said. “The brand of baseball that we’re going to play this year will be a lot different than what we’ve seen in the past. [We are] creating an identity for the type of offense that we run. Our pitching philosophy is something that we’ve never consistently had before, so the fact that we have this overarching philosophy from the top down that our players are buying into, all in, is something that will really help drive our program forward.”

So, with a young roster and a completely new coaching staff, this will be an interesting season for Whitman men’s Baseball. Though technically a transitionary or rebuilding year by definition, this team looks driven and motivated toward positive results. Fans should keep track of this promising team throughout this season of major change.

“I’m here for as long as it takes us to build this thing. That’s our goal. We got a young group, and it’s a great group to build with,” said Coach Kitamura.