Whitman athletics: a fall in review, strong spring to come 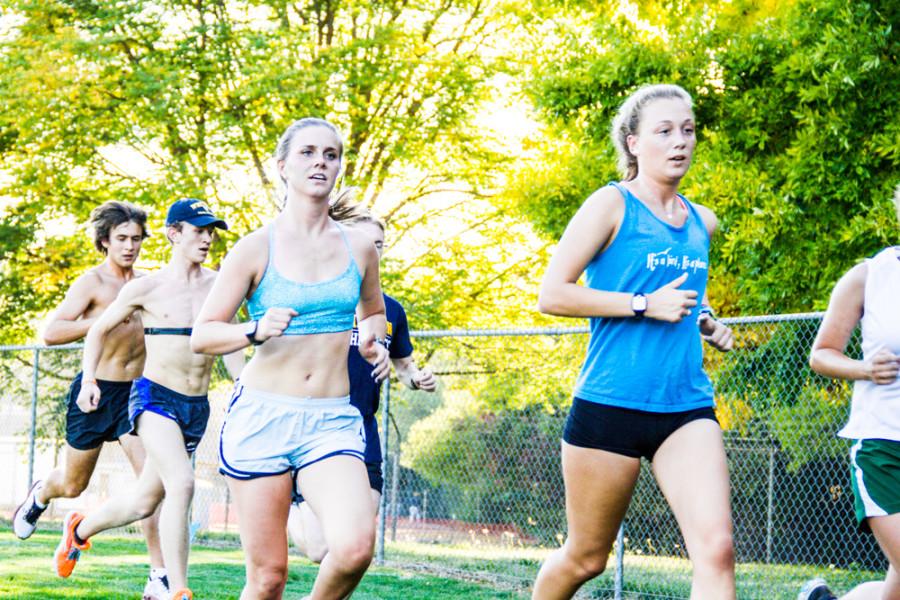 Whitman Athletics got off to a strong start to the 2015-16 season as seven teams played their fall seasons. Even before the season there was excitement, as the soccer teams got to play with the members of Mumford and Sons when part of their pre-season practices overlapped with the Gentlemen of the Road festival. There weren’t any Conference Championships, but many teams competed at the top of the Conference and both Cross Country teams finished in the top 10 at Regionals.

With 3rd place finishes in conference and top 10 finishes in the West Region, the men’s and women’s Cross Country teams saw overall improvement from last year. The men, 6th, had a pair of runners selected to the second team all-Conference in T.C. Heydon and Matt Wotipka. Heydon also earned an all-West Region selection after finishing 22nd in the Regional Championships. The women’s team completed the Regional Championships in 9th place thanks to their depth, as their first five all finished in the top 75. Julia Hart was given all-Conference honors for her 14th place finish at the Conference Championships.

The Whitman Volleyball team finished their 2015 season with a 6-16 record overall, including 4-12 in Conference play, which left them 9th in the Northwest Conference. Coach Matt Helm knows there are many positives to take from the season.

“We competed very well this season with a young team. We ranked 4th in the conference in points per set and were able to take away valuable lessons from this season which will fuel the fire for our squad next season,” Helm said.

Having lost only two seniors, the future is bright for this young team.

The Women’s Soccer season saw them tie 6 of their 16 Conference games. Their 3-7-6 mark that included a tie against undefeated Conference champion Puget Sound put them in 6th place in the Northwest Conference. Kelsey Peck was selected to the second team all-Conference while Lena de Guzman and Alissa Soo were given first team all-Conference honors.

The Men’s team had a relatively disappointing season, as they finished 8th in the NWC behind their 2-10-2 record in Conference play. Much like the women’s team, the record doesn’t give a perfect assessment of the season, as they competed hard and came up just a goal short on many occasions. Daniel Kim and Noah Cavanaugh were awarded second team all-Conference and honorable mention all-Conference selections, respectively.

The Men’s Golf team completed the fall portion of their schedule with an 8th place finish at the Fall Classic. With one senior and four underclassmen, it was bound to be a year of transition, and the team still has the second half of the season to help them grow.

“The returning players did a great job of integrating the new players to the team by helping them understand how we support and help each other towards the goal of giving one’s best effort [every] time we teed the golf ball up,” coach Peter McClure said.

The Women’s Golf team had a solid fall season, ending up 3rd in the Northwest Conference, and finding themselves ranked 4th in the West Region and 19th nationally. As coach Skip Molitor pointed out, Whitman has three players ranked in the top 30 for scoring average nationally: Phoebe Nguyen (4th), Shiyang Fan (29th) and Alyssa Maine (30th). The improved play of Kendall Dunovant and the return of Lou Points from a semester abroad will greatly help the team as they compete for a Conference Championship and for a spot in Nationals.

Looking towards spring semester, there will be no shortage of great competition paired with positive results for all teams.

The Baseball team finished a disappointing 6-28 (5-19 in Conference) last season. A pair of returning second team all-Conference performers, Robert Maislin and Adrian Vela, along with 23 total underclassmen, give the team high hopes for this year and the future.

Women’s Lacrosse also returns a pair of all-Conference performers, as junior Bea Sheffer and sophomore Nora Leitch were selected to the first team. The team, like the Soccer teams, lost some tough, close games and finished 4th in the Conference with a 2-6 record in their inaugural season.

The Men’s Tennis team has lost a pair of seniors: James Rivers and 3-time Conference player of the year Colton Malesovas. But the team is still ranked 17th nationally in the preseason ITA rankings. Despite the losses, the team is in good hands as all-Americans Zach Hewlin and Jake Hoeger are back. The team performed well in their one fall event, with Hewlin and Phil Locklear winning the doubles event while Hewlin took home the singles title.

The Women’s Tennis team also begins the season in the ITA top 25 with their 22nd place ranking. Four talented first-years joined the team and will try to replace the four departed seniors. Courtney Lawless, 3-time NWC player of the year is gone along with her twin sister, Morgan. Together they won the doubles championship at Regionals. Courtney also won singles, giving her an all-American selection. Allie Wallin, entering her junior season, is back after being selected to the second team all-Conference last year.

Finally, both basketball teams look poised for successful seasons, each remaining undefeated through their opening stretch (M: 7-0, W: 6-0). On the men’s side, senior Christian McDonald has provided leadership for a young group with a talented first-year class. For the women’s team, they will look to rebound after last year’s unsuccessful bid to make playoffs for a third straight season.