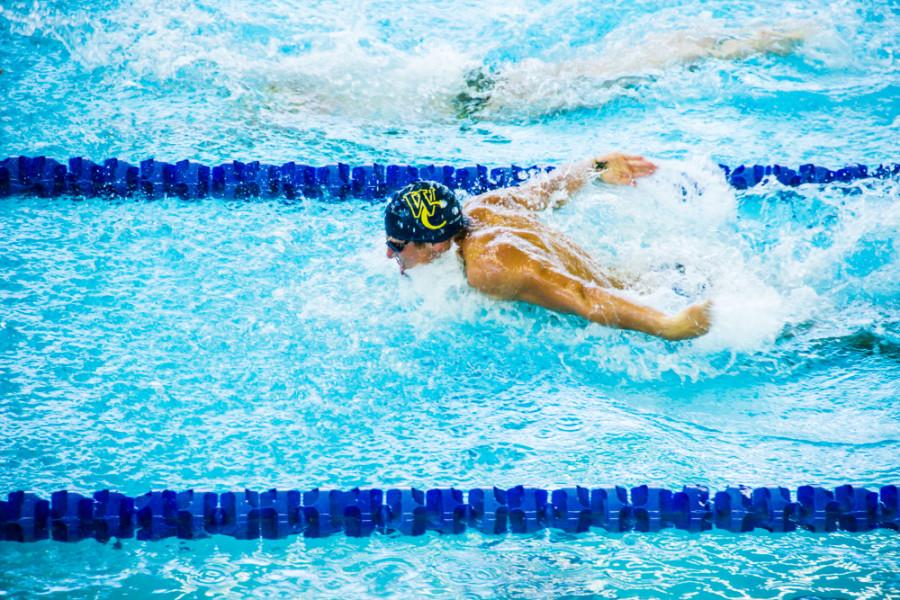 Last weekend, Whitman Swimming got off the blocks with the curtain raising NWC Sprint Pentathlon and Relay meets. With co-ed relays and non-traditional sprint events, these meets have a different competitive environment to the average Northwest Conference meet. These events had five of the eight teams from the Northwest Conference in attendance, making them the first competition of the year for many of these schools. Whitman placed third overall in the meet, fifteen points behind co-leaders Whitworth and Pacific Lutheran.

Sophomore Maddy Gyongyosi is a fan of this opening meet and discussed its fairly laid back atmosphere.

“People take it seriously but it’s a light-hearted way to start off the season. I personally am not a sprinter, so it’s just a meet to ease into the season for me where not everything is on the line,” Gyongyosi said. “It’s [the] beginning of the season and you get to swim within the men’s and women’s teams with the co-ed relays. It really brings everyone together in a healthy competition.”

One of Whitman’s top performers in the meet was sophomore Clark Sun, who swam the anchor legs in both relays Whitman placed first in. Sun discussed how this meet serves as a marker for Coach Jennifer Blomme and how he felt about the team’s and his own performance this weekend.

“Coach [Blomme] put people in certain events and relays just to see how people are doing. As far as the team’s performance yesterday, the team got third. Which is fine because it’s a ‘see where you are’ type of meet. People were in events they might not normally do,” Sun said. “I was … put in the butterfly, which I haven’t swam since early high school. I was very unsure of how I was going to do, but I went out there and put up some really good splits that I’m really happy about. I helped facilitate two relay wins. I wasn’t fully responsible for them, but I did do my part to help the team win those relays.”

Both the men’s and women’s teams are coming off of a historic year in Whitman Swimming history. With the men’s conference championship and the women’s impressive second place finish, it will take a special effort to better the accomplishments of last year. Blomme talked about how the team’s makeup has changed since last spring.

“On the women’s side, we only graduated one senior so we’ve got a lot of strong leadership and some great new swimmers. On the men’s side, we graduated three seniors who were pretty significant. Karl Mering was an all-American and three time conference MVP, and that certainly changes the dynamic a little bit,” Blomme said. “We’re certainly excited to see some people rise to new positions because of that absence. We’ve got a really nice group of first year men. We’re still feeling confident about our role in the conference and our team’s position there.”

Gyongyosi has been very pleased so far this season with the boost that the first years have provided.

“I think being a first year is a very intimidating place to be. You don’t really know what to expect. They’ve come into this season with such energy, which has been useful to the rest of the swimmers as well,” Gyongyosi said. “It is nice to see these fresh faces that come to practice every day eager and ready to be with the team. It infects everyone in a positive way.”

Success this season will not be as simple as just reproducing what was done last year. Whitman is no longer an underdog team trying to fight its way to the top. Now it is on other programs’ radars and has to be on the defense. Blomme talked about how the team is dealing with their new status and what steps they have been taking to replicate it.

“We discussed what we learned as an underdog sort of chipping away year after year at the top and what we learned from finally getting there. We’ve had a lot of opportunities and are continuing to reflect on that process,” Blomme said. “Our main intent is to take those lessons about what it means to rise to the top and what to expect from ourselves every day and to expect things out of each other in a way that is both supportive yet also sets high expectations. If we can do that things will fall into place.”