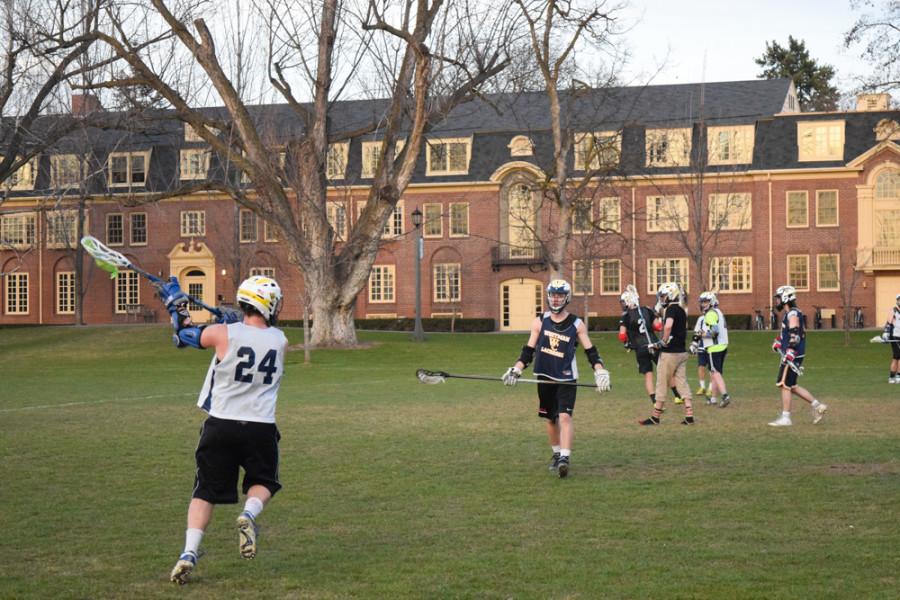 The Whitman Men’s Club Lacrosse Team has found itself going to division playoffs every season since 1995. With many successful seasons before them, the 2015 team have some big shoes to fill, but ultimately, this team looks forward showing the newcomers what it is like to be successful.

With the addition to some new players, the team is fully committed to its development.

“I’m pretty happy with where we are as a team right now. We have a lot of new players on the team, including a few who are completely new to the sport. Everyone has really committed themselves to the team, and we’ve developed a lot because of that,” said senior Captain Max Skotheim.

A part of this commitment and development comes from the recent injuries that the team has experienced. So far there have been three concussions, a knee injury and a case of pneumonia that have held back a total of five of the experienced offensive players, in addition to several other players with smaller injuries that are currently playing through them. However, all these injuries have allowed for unintended developments.

“Because of the injuries, we’ve had to put players in new positions that they’re unfamiliar with. Everyone has done a great job of stepping up to the task and figuring out their roles even as they’re continuously shifting. Our rookie players especially have done a fantastic job of representing our team and taking on larger leadership roles,” said Skotheim.

The inexperience comes from a range of players, with some new upperclassmen joining the younger student-athletes.

“The current rookies on the team are a mix of younger players who have played a lot through high school and even before and some older guys who are just starting out, so we are all learning from each other a bit. It’s a transition from high school lacrosse to college lacrosse,” said first-year Evan Neal.

One of the outstanding first-year players is Michael Brock.

“Michael is definitely one of our rising stars on the team. He’s a hard worker and he’s all over the field in games. His stick skills are great for a long pole, and he has had several goals already this season,” said Skotheim.

Their first home game was last Sunday against College of Idaho, for which they were very excited, especially coming off two losses to University of Puget Sound and University of Portland. The two losses on the season put the team in a challenging spot, but they are still in the running for playoffs. After a tight, highly competitive game, the team dropped their contest on Saturday at 9-8. Though in a tough spot and looking at playoffs from the outside for now, the team is optimistic about the remainder of the playoff race.

“The level of play will continue to ramp up with Central and Southern Oregon, among others. We know the games will be tough, so we’re staying focused on the playoffs, and if we play to the best of our abilities we can definitely make it,” said Neal.

Heading into spring break with a win against Central Washington University and a loss to College of Idaho on the weekend gives the team an opportunity to develop some more before they face the tougher match-ups in the second half of their season.

“The fire we’ve lit under ourselves will be really constructive for the team, both in forcing us all to rely on one another more, as well as giving our newer lacrosse players the opportunity to really step out of their comfort zones and grow. I think we’ve done a great job of simulating these kinds of tough moments by treating our practices like game situations, and I look forward to seeing that hard work pay off with some clutch wins,” said Brock.

Hopefully the team’s flame will only become brighter as its season continues through the spring.