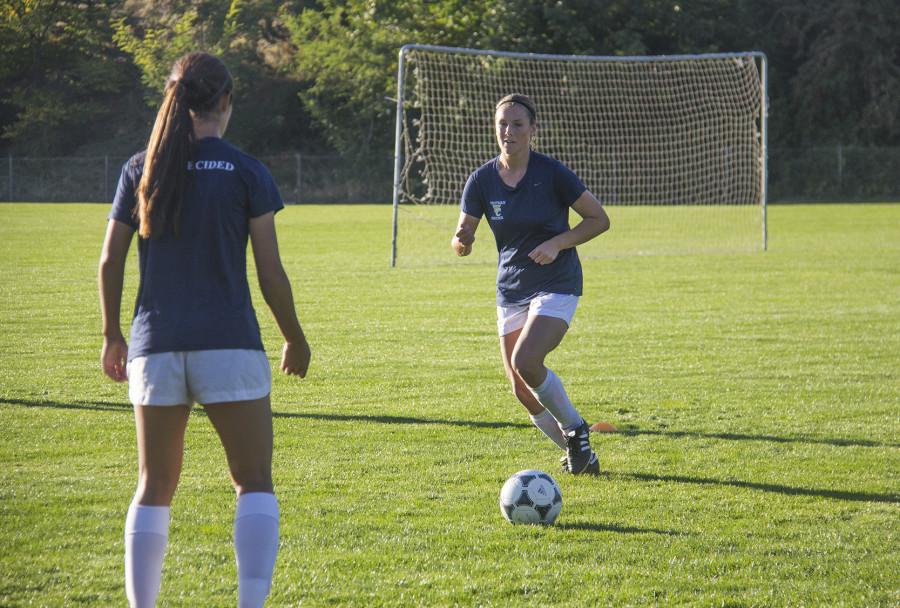 In any sport, a coaching change typically means a transitionary period in which the team and coach search for a new rhythm and work to become a unit. A rough start was precisely what the Whitman women’s soccer team and new Head Women’s Soccer Coach Laura Williamson wanted to avoid. Off to a 4-1-2 start in conference play thus far, the team seems to have avoided those transition-year speed bumps and have showed they are a team to watch as the second half of conference play approaches.

When last year’s coach announced she was leaving, the juniors on the team were concerned that their senior year would be spent transitioning from one style to another and result in a subpar season. Williamson made it clear to her team that she wanted the transition to be seamless.

“When I was interviewed for this job, one of the players’ biggest concerns was having a new coach come in and have that coach feel like this might be a rebuilding year. They made it very clear that this wasn’t a rebuilding year and that they were ready to hit the ground running and we’ve been doing just that,” said Williamson.

Williamson isn’t worried about any transition issues, as she already has her eyes on the future of Whitman soccer.

“My biggest goal of the season is getting the culture right. We need to make sure we’re doing this for the right reasons and [focusing] on the team and the program first. No matter where we finish in the Northwest Conference, this season should be a springboard for the future success of Whitman women’s soccer,” said Williamson.

And that task might be made easier for her with the amount of quality players she has to work with on this year’s squad.

“We have a four-person senior class, and currently only two are playing due to injuries. So most of our starters are juniors or younger, so we have a chance to build a really strong bond for the next couple of years,” said junior captain Kelsey Peck.

Williamson echoed Peck, adding that the team as a whole has committed to her vision.

“We have a young group but we have some talented players and they’re buying into what we’re trying to accomplish and the style we’re trying to play. We also have great chemistry on and off the field right now and hopefully we can continue to improve,” said Williamson.

“Bringing in a new coach has changed our style of play quite a bit. Laura has pushed us towards possession more than we have in the past, and it has forced us to be more dynamic and just a better team as a whole, being able to play around teams that usually just play a kick and run style,” said Brown.

The players and coach attribute to the success thus far was the team’s trip to England over the summer, something that the team does every four years.

One worry coming into this season was the youth of a team that expected multiple rising sophomores to step into starting roles. When referring to the negatives and positives of having a young team, Peck explained how the preseason trip to England helped alleviate some of those worries.

“I think the only negative would’ve been experience and England was great for that because it erased that lack of experience. Also all of our underclassmen are really mature in the way they play and the way they act. So we’re just lucky that it doesn’t really seem like we have a young team even though we do,” said Peck.

So far, sitting near the top of the Northwest Conference, the team has a lot to be proud of, but they know there’s still work to be done.

“I think we can always improve. I do think there were some games we should have won and we know there are a lot of simple small things we can continue to improve on,” said Brown.

She cited reducing free kicks allowed near goal and beginnings of second half slumps as things to work on.

At the end of the day, though, their record speaks to the skill of this team, and the winning combination on this team is tangible.

“We have a lot of strong youth and we have a really great senior class even though two are injured –– they’re all very present. And I think the combination of great leadership, strong youth and a lot of passion and desire to go out a win games,” said Brown.

The team will start the second half of conference play after the four-day break away at Whitworth on Wednesday, Oct. 15.