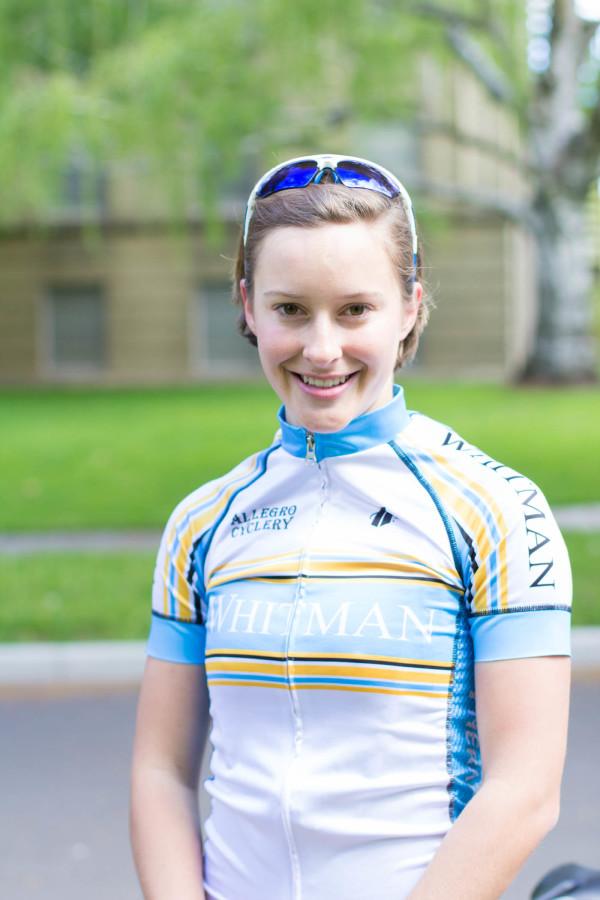 On the weekend of April 13-14, first-year cyclist Dessie Weigel celebrated a first-place finish in the criterium race and second in the road race at the Northwest Conference Championship. This weekend she will be in Virginia with her team to race in the Division II National Championship for the women’s team time trial.

For Weigel, though, the road to cycling success has never been easy. In fact, it didn’t start anywhere near a bike at all.

Entering her junior year of high school in Boise, Idaho, Weigel was an all-state cross-country runner with aspirations to run in college. That’s when everything went wrong.

She began to lose the muscle function in her calves, causing her to run slower and slower at each race throughout the year. In her final race, she collapsed across the finish line to help her team win the state championship. By the end of that race, she couldn’t lift her heels off the ground.

Weigel had mitochondrial myopathy, a muscle disease that only affected her calves, but could potentially impact any major muscle group in her body.

“That was a hard year. I’ve always been an athlete, I’ve always been really competitive. I was thinking: oh my god, what am I going to do?” said Weigel. At that moment, the search for a new sport that didn’t involve her calves as much as running began.

She made strong impressions immediately.

“She came to the sport a lot more recently than I did and I could tell she was really good at it, and honestly I was a little intimidated by her,” said first-year Fiona Bennitt.

Weigel started racing in the women’s “B” category, but quickly moved up to women’s “A”. The main push for Weigel, though, does not lie in results, but in a desire to push herself to the limit of what her body can do.

“Her ability to push herself to deeper and deeper levels of pain is really inspiring to me and to the team as a whole,” said Bennitt.

Even with her great success this year, Weigel still feels ambivalent about cycling in general. So much of her life up until a few years ago was about running, and it has been difficult for her to make the mental switch. A year ago she received a necklace with a bicycle on it. The first time she put it on was last week, after the conference championship.

“Before, I felt like I didn’t have a right to wear it because cycling didn’t feel like it was mine,” she said.

Now though, that feeling is gone, and she has accepted her relationship with the sport.

“I don’t even know if I love cycling, but it seems like it’s what I can do,” said Weigel.

Everyone watching the women’s cycling team this year knows that she can cycle very well. No matter what next weekend’s national championship or Weigel’s cycling future holds for her, her talent and the promise of the future gleams in the eyes of everyone who watches her.

“I have no doubt that she could not only win a national title this year, but also ride professionally and be competitive with the best in the world,” said senior cyclist Rachel Geiter.