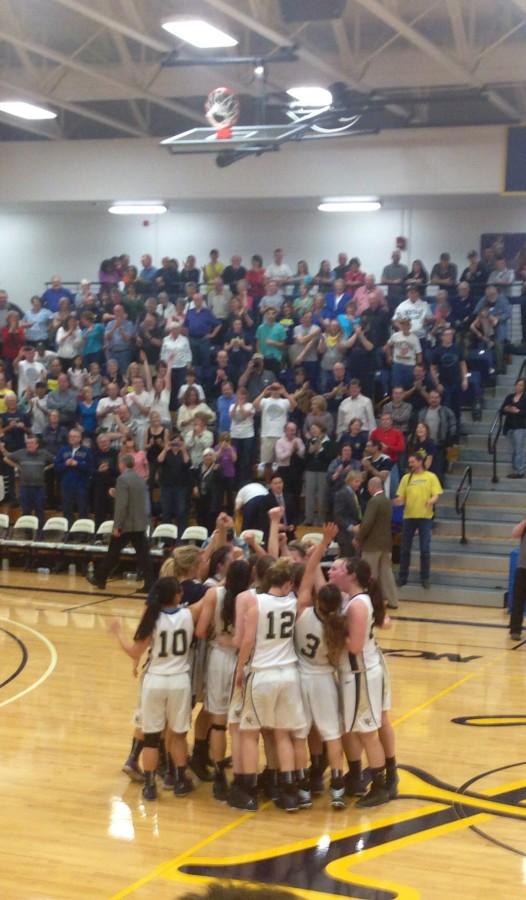 The game is done, the nets are cut down and for the first time in program history the Whitman women’s basketball team has danced all the way to the Final Four.

In front of a raucous crowd that filled the Sherwood Center to the brim Saturday night, Whitman (30-1) defeated Thomas More College (31-1) 76-60 to earn a berth in the NCAA Division III semi-finals next week in Stevens Point, Wisc. Thomas More was previously undefeated and seeded first in the 64-team DIII field.

The opening half featured a back-and-forth game as both sides looked to establish themselves offensively and defensively. Whitman led 25-23 at the break after a half with seven ties and eight lead changes.

Slowly but surely, the tide turned in favor of the Missionaries at the end of the first half. Thomas More sophomore Sydney Moss, the nation’s leading scorer this season at 28.6 points per game, suffered a knee injury on a hard drive to the basket when she was fouled by Whitman sophomore Hailey McDonald. Moss did not return to the game and finished with her six early points.

From there, the second half belonged to the home team.

McDonald opened a 12-0 scoring run with a three-pointer less than a minute into the second half and the Missionaries never looked back, leading the rest of the way. Thomas More cut the Whitman lead to single digits, 45-37, at the 10:48 mark after a three-pointer by Thomas More senior Katie Kitchen.

And that is when the seniors took over. Senior Sarah Anderegg hit free throws on back-to-back possessions to put Whitman back up by 12. Then layups by Anderegg and senior Meghan White on three consecutive possessions and free throws by senior Tiffani Traver put Whitman ahead 61-47. A free throw by Anderegg gave Whitman its largest lead of the game at 18 points, 76-58, with 1:02 to play.

Anderegg led the Missionaries with 20 points and 11 rebounds. White was an efficient 6-7 from the field and finished with 15 points. Anderegg and White put up matching totals in rebounds (11) and blocks (two). Junior Heather Johns, who was the Player of the Year in the Northwest Conference, was clearly a focus of attention for the Thomas More defense; she had 13 points and three steals in a team-high 33 minutes.

In what was – finally – their last game playing on George Ball Court, Whitman’s four seniors went out with a bang. All four seniors played a vital role in the victory. Along with Anderegg and White, Traver had a well-rounded game with nine points, five rebounds and a team-leading three assists. Senior Marah Alindogan came in late to help seal the victory and finished with two steals and three points on two darting drives to the basket.

Whitman will travel to Wisconsin next week and will face the University of Wisconsin-Whitewater (26-4) on Friday March 21 at Quandt Fieldhouse in Stevens Point, Wisc.