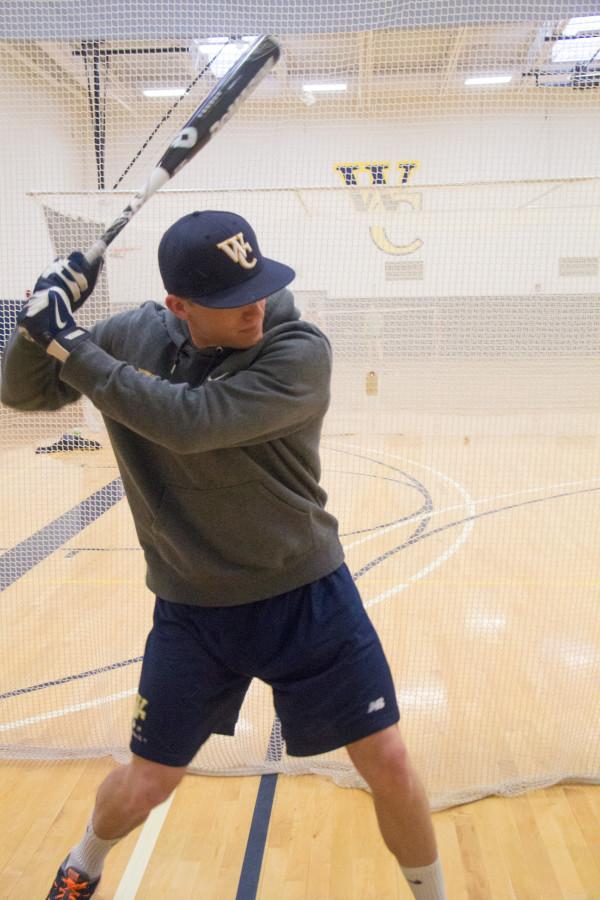 For many college athletes, the senior year season is a bittersweet experience. It is the culmination of four years of hard work and, for those athletes who will not play after college, the product of years of experience. Seniors will have seen the ups and downs of a program, and ideally their final season is the best of the four.

The Whitman baseball program has certainly had its share of ups and downs, and the recent success has really been something new to the older players on the team, who endured two consecutive four-win seasons in 2011 and 2012. Last year, the team went 16-22 after a coaching change and a reenvisioning of the program as a whole. Outfielder Kyle Moyes has been looking forward to his senior season since he arrived at Whitman. Not only is this season one more chance to make his mark on the program, it’s also one where he has the age and experience to inspire his teammates and be a leader on the team.

“At Whitman, my career has been characterized by preparation for this season in particular. Building a successful collegiate baseball program is a time-intensive process. This season will undoubtedly serve as the culmination of my collegiate and entire baseball career,” said Moyes.

At 9-4, the team is off to an even better start than their 2013 season, and Moyes has been contributing to that start in numerous ways. Moyes is hitting well with a .359 batting average, and he is tied for the most RBIs on the team so far, having already hit home 17 runners in their first 13 games. He also has one home run so far.

“It seems like everyone is hitting the ball well, especially Kyle. He has had a few clutch hits that have helped us win during close games,” said sophomore shortstop Ozzy Braff.

Being a senior, Moyes sets an example for the rest of the team, and his hard work in practice and stellar play in games has helped set a tone of excellence for this season.

“I would say that everyone on the team has improved. Everyone is pushing one another to be the best they can be,” said junior pitcher Spencer Hobson.

Moyes sets an example by working as hard as he can whenever the team is practicing, and that dedication is what makes his example so powerful.

“Kyle has always been really talented. This year he has consistently come to the field with great focus and energy whether it’s a game or a practice, and I think it has brought his talent to a whole new level,” said Braff.

And that hard work isn’t just restricted to the months that the team is in season. To be as successful as possible, Moyes doesn’t stop working when the season is over, but rather works just as hard to prepare for the next season ahead.

“During the offseason, my primary focus was to get in to the gym and improve my physical shape. Getting through a 40-game, four-month season requires some dedication to the weight room,” said Moyes.

That offseason work is likely what has made the difference in turning around a program that totaled just eight wins over two seasons only two years ago. Being a part of those teams has made Moyes and fellow seniors proud to see the positive results of last season and, so far, this year too.

“It was rewarding to see our team last year succeed more so than it had in the past. I think as a team we realized where we could have ended up. My class of players met after the season and agreed on where we wanted to take the program this season. I feel like we have the leadership and talent to get us to the top of the conference this year,” said Moyes.

The recent success has played a large role in the improved morale of the team this year.

“Team chemistry is better than it has been in the past. Our defense is playing better and making the plays that should be made as well as the spectacular ones every so often. The bats cooled off a little this weekend, but they have been hot overall,” said Hobson.

As for the rest of this season, Moyes echoes what the rest of the team is collectively thinking regarding their intended results.

“This season, I want to see us take the conference. When we are playing our best baseball, we can beat anybody. Finding consistency and maintaining a focus on our collective team vision will be our biggest keys to success,” said Moyes.