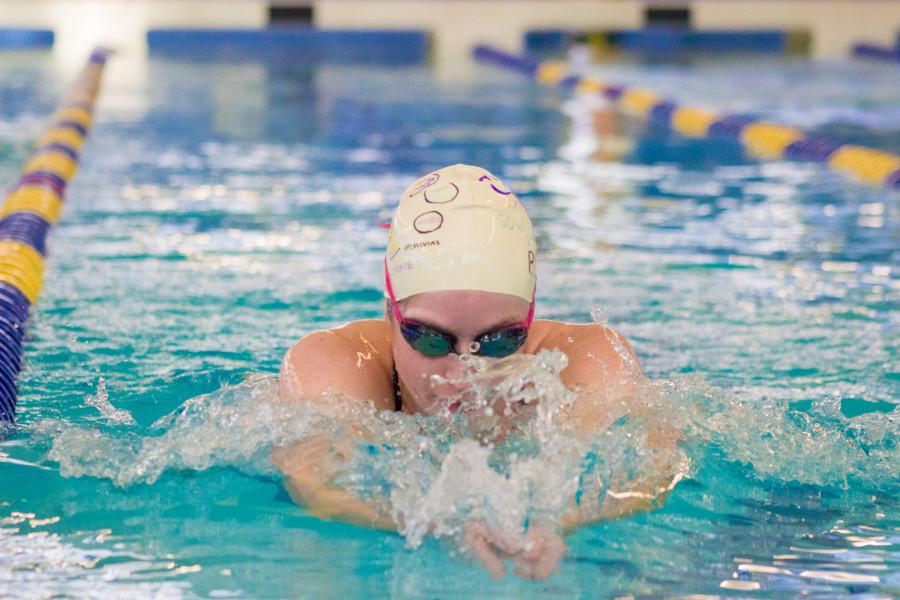 Whitman’s All-American Honorable Mention swimmer Claire Collins has every right to brag about her record-breaking accolades, but when it comes to her success, Collins offers nothing but modesty. Collins, who took first place in the 200 breaststroke at the Northwest Conference Championship last week, just recently heard that she will be returning to the NCAA National Championships for the second consecutive season.

Not only is Collins just the second female swimmer in the history of Whitman to make it to the NCAA National Championships, but she also holds the school record in both the 100 and 200 yard breaststroke. Collins is shy and humble when asked to talk about her accomplishments.

This kind of humility is an attribute that makes Collins’s standout performances in the pool all that much more respected.

“She swam so fast this weekend. If it wasn’t for the articles plastered with her face and headlines with her name, you would never know how much she rocked. She is so modest,” said fellow senior teammate Ellen Banks.

Aside from being so proficient in the pool, Collins radiates love and energy everywhere she goes, making her a remarkably devoted and inspiring teammate.

“Claire is my number one fan. I think she’s a lot of people’s number one fans. She greets everyone with a huge smile and open arms, and so many people appreciate her ability to say just the right thing,” said Banks of her teammate.

Her bubbly personality and undeniable love for swimming make for a positive atmosphere whenever Collins is in the room or in the pool. She is known for wearing her superstitious duck boots and a huge smile up to the block, where she does a little dance before plunging into the water to set records.

“She is this really beautiful combination of a light-hearted and kind nurturer with a totally powerful beast of a swimmer,” said Head Swimming Coach Jenn Blomme. “She is an incredible role model to all of her teammates.”

This blend of silliness paired with a competitive drive to succeed helps Collins stay focused throughout the season, rather than getting burned out.

“Claire takes swimming so seriously and brings intensity to practice, keeping in mind what her long-term goals are,” said senior Melanie Notari.

Despite this level of seriousness, Collins is always looking to have some good clean fun.

“It was just us three and was so unbelievably fun. Claire and Ellen are both those people you can have a good time with no matter what, and I can’t imagine my college experience without that,” said Notari.

Although swimming is thought of as being an individual sport, and Collins has more than excelled in that area, she attributes most of her success to being a part of such a great program focused on team and family. This individual versus team dynamic of swimming is unique and something that Collins recognizes and appreciates about the sport.

“You can do your own thing, work hard and race on your own, but you’re still contributing to the entire team. You get together while being an individual and other sports just don’t offer that dynamic,” said Collins.

Being a student athlete can be difficult, and when schedules get hectic, athletes often shut down, but not Collins, who admits to flourishing in times of chaos.

“Honestly, I swim better when I’m really stressed and have a lot going on. It makes me appreciate being in the pool so much more. It’s an escape, and I really love being there,” said Collins.

Collins, who recently passed her senior English exams and is applying to graduate schools, has a lot on her plate, but as soon as she gets into the pool, all her stressors disappear.

“My mind turns off and just wanders. I don’t even have to think about moving. It’s this thing called flow, and I love it,” she said.

Teammates agree and praise Collins for her ability to commit equally to academics, swim and her social life. Collins is also a member of the Delta Gamma women’s fraternity, a volunteer with Adopt-a-Grandparent, an Athlete Ally Campus Representative and a writing fellow.

“She makes it all look so easy,” said Notari.

While the regular season may be over for Whitman’s swim team, which took third in the NWC last weekend, Collins is still in the pool waiting to get news from nationals.

“I’m not ready for it to be over. It’s almost time, and it’s a bittersweet feeling,” said Collins, hoping to make one last mark in her career here at Whitman.

Claire Collins will be dancing her way to the pool at the NCAA National Championships from March 19-22 in Indianapolis, Ind.