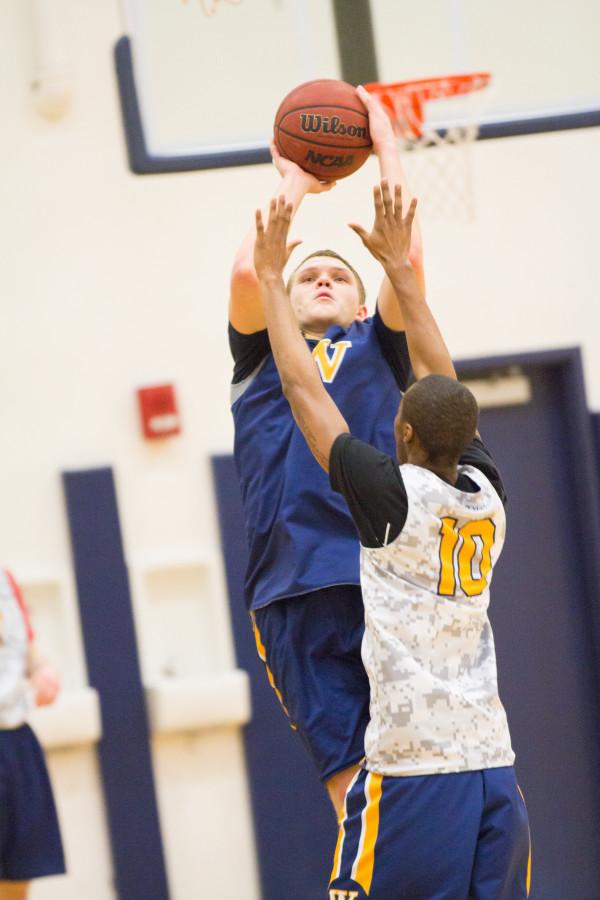 Every night like clockwork, junior Matt Mounier, a guard on the men’s basketball team, plans out his schedule for the next day down to the hour and records it in a notebook. The reason for this rigid schedule? According to Mounier, he constantly strives for success.

“People who write things down have a higher percentage of getting it done. When you record your plans and goals, you achieve your goals faster,” said Mounier.

For Mounier, life is approached very methodically and purposefully, on and off the court. The results are evident on the court. Mounier is having the best season of his collegiate career, averaging 16 points, five rebounds and two assists per game. In more ways than one, Mounier’s team credits him as a pivotal component of their successful season.

“We can always count on Matt to make plays. It gives me as an individual player and the whole team confidence because you know that you’re 10 times better when he’s there,” said sophomore forward Evan Martin.

“[Mounier] is one of our primary scorers, someone we look to when we need to get a basket. His presence always makes the team better. Even if he is being contained offensively, he is one of our best defenders,” said Outzen.

Surprisingly, Mounier’s success on the court cannot solely be accredited to his athletic ability. He claims it is largely due to his mental toughness and preparation, which starts before he steps out on the court.

“Before the game, I meditate. I think about all the people I have played with, like childhood opponents and friends, all the big games or game winners I have ever had, then I think about the team we are playing against––the looks I will be getting and how I am going to score,” said Mounier.

Mounier’s mental toughness continues the moment he steps onto the court. He describes his thoughts during the moments before tip-off.

“I think about the fact that I am always having to prove something. It is my motivation to play,” he said.

“[Mounier] is the mentally toughest teammate I have ever worked with. He pushes himself through anything and everything,” said Durham.

Mounier’s teammates also cite his work ethic as a reason for his individual and team track record. When most students are sleeping in the early mornings, Mounier is on the basketball court or in the weight room.

“On my recruiting trip, [Mounier] had us both up at 7 a.m. shooting and doing drills with a tennis ball. I’d been on a few recruiting trips, and none of the players would have done that. Since I’ve been here, I’ve always seen him at the gym. He is always working hard,” said Martin.

For a player who eats, sleeps and breathes basketball, the bigger question is: why work so hard?

“I am obsessed with success. My whole life I have had to prove something, and the only way I know how to do that is by being successful,” said Mounier.

Mounier also recognizes the importance of his team in his motivation to do well.

“I wouldn’t want to let the team down. That is what upsets me the most––when I play bad,” he said.

Though Mounier will eventually leave Whitman with the pride of contributing to some of the most successful seasons the program has ever had, he will also be remembered for something so much more, even more than the stats and records he has the potential of breaking. When all is said and done, after the last whistle is blown, Mounier will always be seen as a great teammate and friend.

“If I could describe [Mounier] in one word [it would be] outrageous. Outrageous. Everything he does, on and off the court, is just crazy. The jokes he makes, the things he does, the plays in basketball that he makes––just ridiculous. One time we went to this lake as a team, and the water was freezing cold. We bet him he couldn’t swim across it and back, and he jumped in with ease. Need I say more?” said Martin.

Durham also describes a time when Mounier had a case of the hiccups.

“[Mounier] decided that the only way to get rid of them was to do a handstand for five minutes. He is not as serious off the court. He is definitely a jokester,” he said.

Mounier’s seriousness on the court countered with his laid-back, cool personality off the court shows there is more to the man behind the uniform.

There is one trait consistent within Mounier’s clashing personalities: confidence.

“Confidence is a huge factor; the harder you work the more confidence you have. The difference between good players and great players [is] the ability to handle mental adversity,” said Mounier.