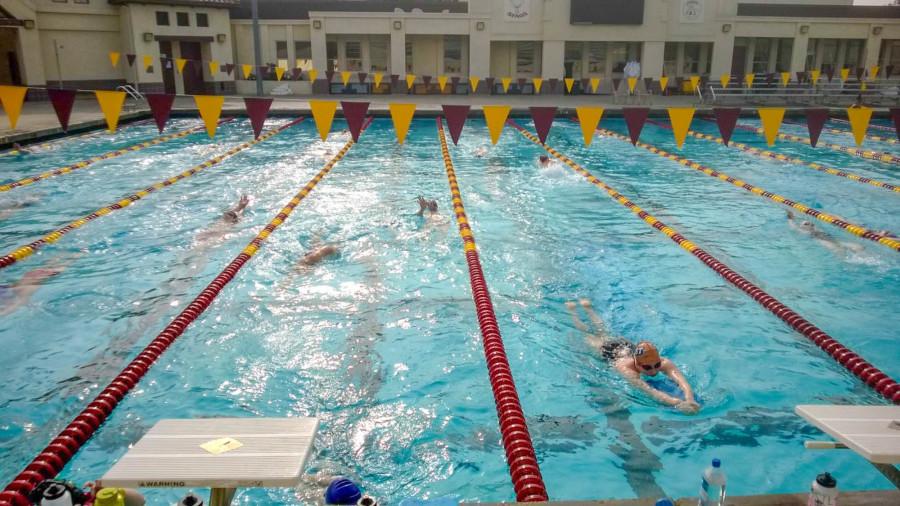 For most Whitman students, winter break consists of catching up on favorite shows on Netflix or spending quality time with family members. However, the men’s and women’s swim teams took advantage of the time away from school to travel to Claremont, Calif. for their annual training trip at Claremont McKenna College.

“[Our] training trip is special because it’s the only time we get to focus solely on swimming with no distractions,” said sophomore Cameo Hlebasko. “It gave us the opportunity of elite training that we simply cannot achieve at Whitman due to other priorities, like classes.”

Sophomore Robby Dorn agrees and notes how the athletes need increased intensity and focus during their training trip.

“It is essentially the pinnacle of our training throughout the season, where we are at the height of both volume of practice and intensity,” he said.

Over the course of the trip, each swimmer logged in around 50 miles of swimming during two daily swim sessions, averaging 12,000 yards a day over a period of eight days. Between sessions in the pool, the team also incorporated dry land workouts into their training, such as yoga, weight-lifting or running.

For sophomore Dane Kawamoto, the hardest part of training was the amount of yardage the team swam by the end of the week.

Though the trip concentrated on improving performances in the pool, it also helped build team camaraderie. Hlebasko noted the rigorousness of the training camp helped the Whitman swimmers make special memories in and out of the pool.

“Rooming together, swimming 50 miles together and the boys running out of food in their room helped bond our team,” said Hlebasko.

Specifically, Hlebasko mentioned that she went down to Balboa Island, Calif. one day with a couple of teammates to explore and relax on the beach.

“It was a nice mental break from swimming an average of so many miles a day,” said Hlebasko.

Dorn and Kawamoto agreed with Hlebasko, stating that their trip to Balboa Island was one of their favorite parts of the trip.

After a strenuous but rewarding week of training, the trip culminated with a meet against the University of Redlands.

“The meet [was] pretty short, but it’s fun to have a change of pace and test out our training in a relaxed meet setting,” said Dorn.

In retrospect, the Whitman swimmers believed their training trip was an unforgettable experience. The strenuous training coupled with enjoyable experiences outside of the pool bolstered team morale, which is vital if the Missionaries are to make a deep run during nationals.

“I think the training trip does wonders. Both this year and last year I have been stunned by how much the team has improved their swimming after the training trip. It’s truly incredible because we all put in a lot of effort, which we benefit a lot from in the long run,” said Dorn.

Kawamoto also expressed great satisfaction with the outcome of the training trip.

“It was really inspirational and promising to see everyone remain upbeat and positive throughout the entire week. Everyone pushed each other to be their best, and this created a healthy environment where everyone could train to their full potential. When someone was having a rough day, their teammate was always there to pick them up and give them the encouragement they needed and deserved,” he said.

With winter break over and another training trip officially in the books, the Whitman swim team will begin tapering off their training to allow for more rest time and, ideally, better results.

“Our next four weeks are the most important parts of the season,” said Hlebasko. “This is the time of year when yardage goes down but intensity goes way up. We practice more at race pace with lots of rest.”

After a meet against Whitworth University on Feb. 1, the men’s and women’s team will gear up for the NWC Championships on the weekend of Feb. 14-16.

“The NWC championships is the one meet we have been training for all season, and I am so excited to see all of the fast swims my teammates have. It will be an exciting few weeks,” said Kawamoto.