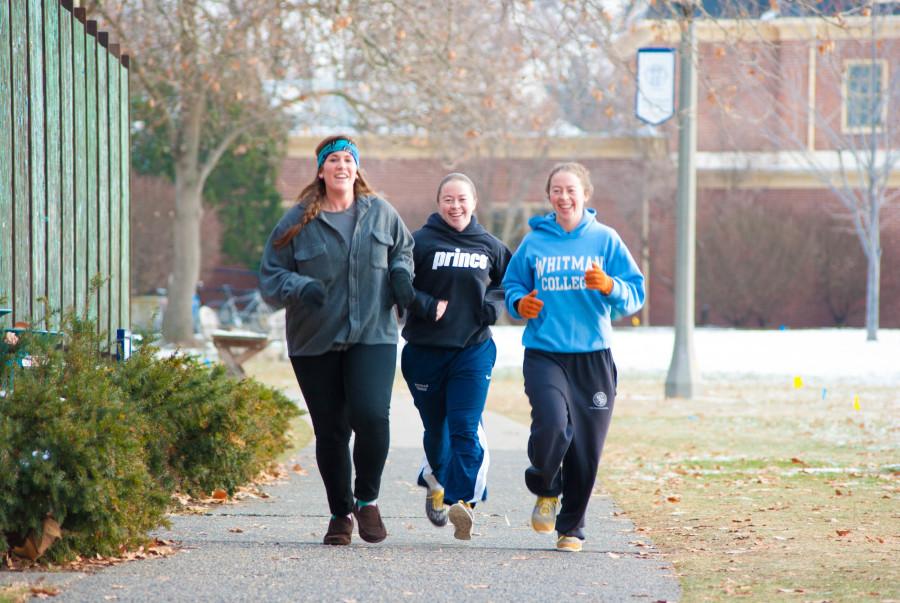 On the night of Thursday, Dec. 6, temperatures in Walla Walla reached 11 degrees Fahrenheit, and with the six-mile-per-hour wind blowing, it felt like one degree. Instead of curling up in their rooms like most people would, the Whitman College cross-country team was outside, running lap after lap after lap around Ankeny Field.

These laps were all part of the “Who Do You Run For?” event put on by the team, designed to raise awareness as well as funds for cancer research. The team, led by a small group of senior girls who have been particularly affected by a rare form of cancer called multiple myeloma, organized and set up the course, a 600-meter loop around the outside of Ankeny. The event started at noon on Thursday and ended at noon on Friday. During those 24 hours, at least two runners from either the men’s or women’s cross country teams were running at a time. So even when the wind chill approached zero degrees, the team was outside running for their friends and family.

But it wasn’t just the cross country team. The event ballooned and received support from around the Whitman community. While donations poured in, organizations around the school agreed to come out and either run or support the runners. The men’s tennis and soccer teams and the entire Ultimate team made appearances, as did Schwa, which performed at noon on Friday as the final lap was run.

“It’s amazing when you put on an event like this how people come out of the woodwork and say that they’ve been affected by cancer,”  said senior Colleen Bell, one of the main organizers of the event.

Anyone running was able to write the name of someone they knew who had been affected by cancer that they wanted to run for on a nametag. When Bell looked around on the day of the run, she saw many nametags saying “Colleen’s Mom”. Bell, whose mother was diagnosed with multiple myeloma last summer, was particularly touched by the outpouring of support she has received.

“I just started crying because people do care,” said Bell. “It’s so great to see the amount of people from our community and from the Walla Walla community. Whether or not they know that I have a personal connection to it, just to show up, it means the world.”

Senior Allie Willson, whose father has lived with multiple myeloma for over five years, also expressed how thankful she has been to have found a strong support network through the Whitman Cross Country Team. Because Willson’s father is 71 years old, Willson pledged to run 71 laps. She did just that, completing her laps by noon Friday for a total of 24 miles.

“It means so much to me because the cross country team has always been my biggest support … There are so many people on the team that have been through a lot and have found running to be what they use to get over it,” said Willson.

“The one thing that’s helped us get through hard times has just been running,” he said.

The cross country team and running in general has been something the entire team has turned to whenever they need support.

“[The team] has taught us what it means to support one another through good and bad times, so we wanted to extend and share that support to those in the community and offer an opportunity of solidarity,” said senior Annie Watters.

Ultimately, 180 people ran more than 2,900 laps around Ankeny, far exceeding the team’s expectations. All in all, that equates to over 1,000 miles ran in the 24 hours. The money raised totaled more than $2,400 with a large part of it coming from junior Chelan Pauly’s unique contribution: her own dreadlocks. Pauly sold each of her 60 dreads to family and friends for different amounts of money, making up close to $1,000.

There were many self-sacrifices on display Thursday and Friday: shaving one’s head bald, spending hours in below-freezing temperatures and running more than 20 miles for a loved one. It’s this type of support and devotion that the cross-country team believes makes their sport and this event so special.

“Running teaches you perseverance, hard work, and forces you [to] reflect on what is important, and we hoped that we could take those and share them with the community,” said Watters.