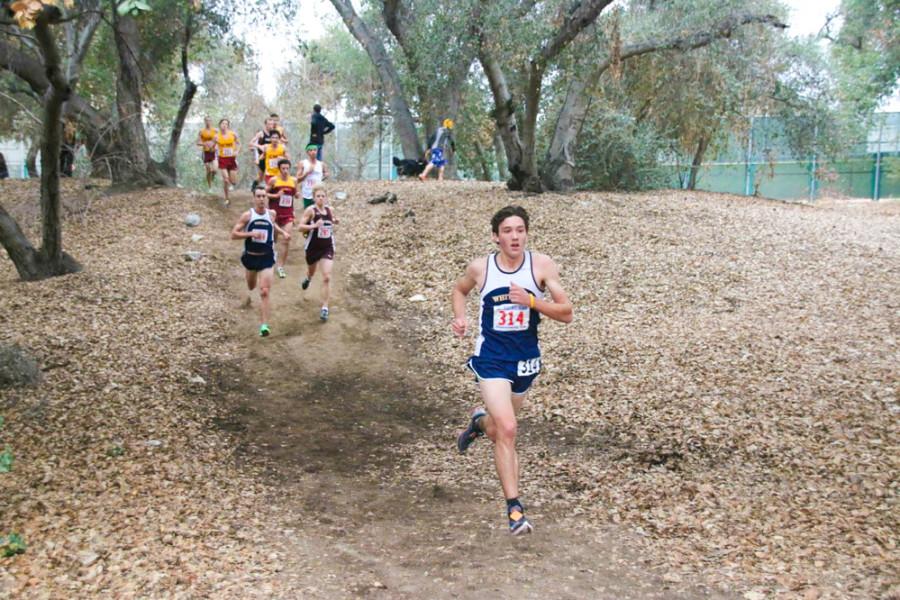 Both the men’s and women’s teams finished with greater success than in past years. The men finished eighth out of 18 teams, while the women finished fifth out of 20 teams.

The meet, featuring teams from all over the West region, was located on Pomona and Pitzer Colleges’ campus in Claremont, Calif. The women’s race featured a six kilometer course consisting of three laps on trail and grass, while the men’s race was eight kilometers. Senior Skye Pauly thought that the course was perfect for spectators, many of whom were Whitman fans.

“We had a really supportive group of teammates, parents and alums to cheer us on,” she said.

On the women’s side, junior Erin Campbell finished 30th with a time of 23:19:56, and Pauly crossed the line in 11th with a time of 22:42.56. Their times were enough to make the All-Region Team, an honor given to the top 35 finishers. Pauly’s finish also qualified her for NCAA Nationals, which takes place Saturday in Hanover, Ind.

Before the meet began, the vibe amongst the women runners was very much relaxed, yet concentrated.

“I think we were all feeling rested and excited to run. We always like to have fun and laugh all the way up to the starting line, but there was definitely a greater sense of our potential in this race,” said Pauly.

Individually, Pauly described her mood as focused and confident.

“I just wanted to be charged and run as hard and fast as I could,” said Pauly.

Wotipka believed the men also had a motivated and calm attitude. Competing in the regional meet was a new experience for Wotipka, so the excitement was also accompanied by nerves.

“It was definitely a little scary lining up against a lot of teams that we hadn’t seen before, but our team was just trying to have a good time, which made going to the line a lot less nerve-racking,” said Wotipka.

When the race began, adrenaline kicked in and both teams performed to the best of their abilities, despite the difficulties of the course.

“After about the first mile the race evened out, we had to go up the same hill four times which was pretty rough. It wasn’t a super fast course, so everyone was just focused on competing, not on the clock,” said Campbell via email.

Heydon also felt that it was a rigorous race.

“The race itself was definitely the hardest this season. The course had a few long hills and there were a lot of fast guys running, especially from the California schools,” he said.

Yet, after the fact, the Missionaries felt nothing but pride.

“I remember a lot of smiles and hugs after the race. When the news came out that we had gotten fifth, things just got even better. We were stoked,” said Pauly.

For Heydon, there was a sigh of relief.

“There wasn’t much room for improvement, and we’d been working and preparing all season. It’s a relief to finish a big race, and I think we all felt that,” he said.

With a successful season finished for all but Pauly, the runners now look toward track season. The club track and field season begins in the spring.

“In a few weeks we’ll start getting into base work again to prepare for track. We’re all excited about the upcoming track season and have high expectations for it,” said Heydon.

Pauly certainly agrees and has high hopes for the team not only for the coming track season but also for the 2014 cross country season.

“Given the strong group who will be around for the spring track season and cross-country again next fall, I predict a positive trajectory,” she said.