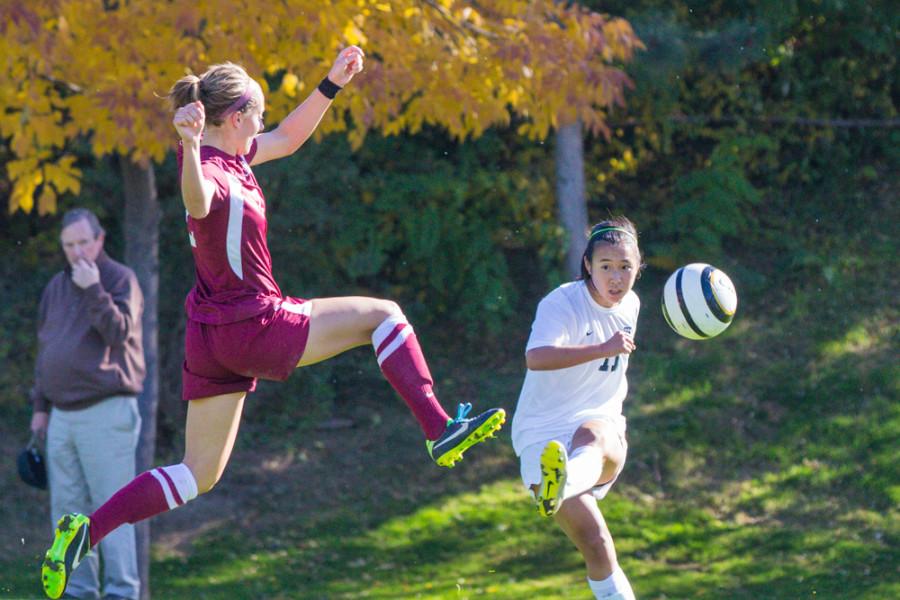 After flying out of the gates to start the season, the Whitman women’s soccer team has slowed down considerably. The preseason saw the team grab a perfect 4-0-0 record over five games in which they outscored their opponents 11 to one.

Since the season began, however, the team has found their road to success to be a bit bumpier, compiling a 4-7-0 conference record after going undefeated in non-conference play. Head Women’s Soccer Coach Heather Cato largely attributes this gap to the stronger competition that comes with Northwest Conference competition.

“We played strong teams during our preseason to try to prepare us for our conference play,” said Cato via email. “However, nothing can compare to the talent or competition once you begin conference games, which is why we have been a bit up and down in the win-loss category.”

The level of competition changes once the season begins, but the team refuses to use this as an excuse. Senior midfielder Hallie Swan feels that some of the struggles as of late have had less to do with a change of competition, and more to do with the natural ups and downs of sports.

“There’s sometimes things that you can’t control,” said Swan. “In the preseason, a lot of stuff just went our way; we were scoring a lot of goals. But as the season has progressed, we’re still making those opportunities, but the team as a whole isn’t taking responsibility for putting those away.”

Some of the trouble with scoring may have to do with the loss of one of their top offensive players, sophomore midfielder Clara Merlino, to injury at the beginning of the season.

“Unfortunately, injuries are part of any contact sport, and losing Clara, who is a good, solid player and an offensive threat for our team is a setback,” said Cato.

Merlino’s injury is hard on the team, but Swan doesn’t see the loss as insurmountable.

“It would be hard to lose anybody because the team is such a unit. But we still have the talent on our team to produce goals,” said Swan.

When it comes to surmounting their misfortune in losing Merlino, Cato and the team are on the same page. They see perseverance and teamwork as the only way to overcome this and the other struggles that they have faced early on.

“We’ve been taking it back to the basics,” said Swan. “Taking the game in five minute periods and doing all the little things right, because that’s how you win games. We’ve also been looking at playing more for ourselves, because when we play our game it can be really beautiful.”

Getting back to the identity of the team and committing to each other can be more difficult during the school year when various other commitments can distract players from soccer. The team sees this as a challenge to overcome, and when they do, this will begin to naturally right the ship.

“I think our play has improved overall as a team up to this point in the season,” said sophomore forward Brianna Brown via email. “We just have to catch our step again and move forward past these obstacles.”

Moving into the second half of the conference season, the team is very aware that there is plenty of time to turn things around. Some of it will come simply from a little more luck and a few more bounces. The team is still confident in themselves, and that confidence, combined with the struggles they’ve faced thus far, will determine how far they get from here.

“[We need to] learn how to respond to close losses,” said Cato, “and continuously come out each day ready to work, challenge one another and overcome the adversities our season to show the true character of our team.”