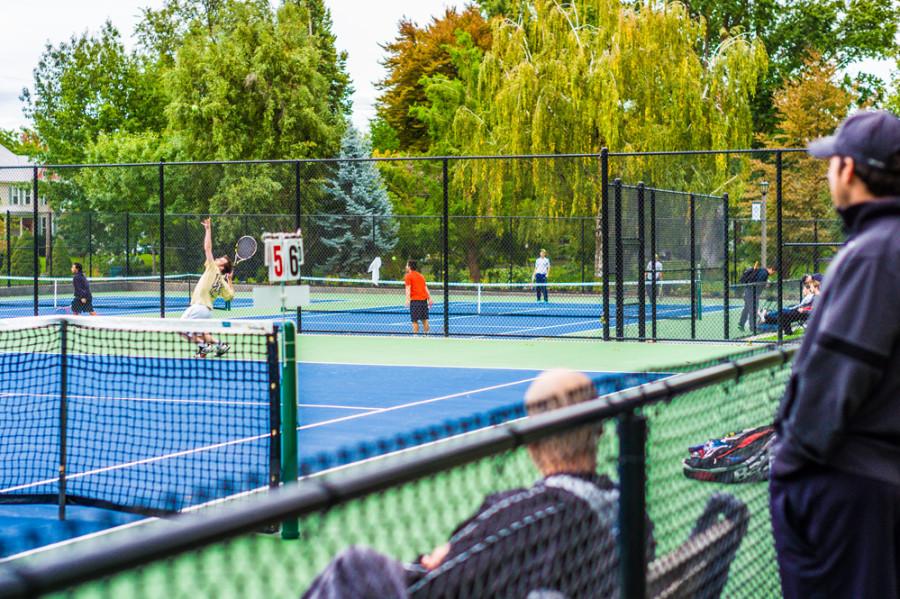 Last October, a committee composed of faculty, staff, coaches and alumni approved the building of six new outdoor tennis courts at a cost of just under $900,000. This past weekend, that investment paid huge dividends as the Whitman men’s tennis team hosted and dominated the annual Fall USTA/ITA Regional Championships.

The tournament was the first chance for players to set the tone for the coming year, as the winners received an automatic berth to the October national championship, as well as All-American status. The Missionaries did just that. As a team, they managed to gain every spot in the semifinals and finals for singles and the finals for doubles. This meant that Monday, Sept. 30, when these matches took place, was a day exclusively for the Missionaries.

In the end, senior Andrew La Cava (seeded second) took home the singles title (6-2, 7-5) over first-year Petar Jivkov (seeded ninth). In the doubles final, La Cava and junior James Rivers won the tournament for the second year in a row by squeaking past seniors Andy Riggs and Steven Roston 5-7, 6-4, (10-5). With the win, La Cava and Rivers will travel to Fort Myers, Florida to compete in the USTA/ITA National Small College Championships in the second week of October.

The tournament was not just a chance for Whitman to show off its potent tennis team; it was also an opportunity to break in the brand new outdoor courts. All matches played Monday took place on the new outdoor courts. Additionally, some early round matches were played outdoors before the windy and rainy conditions forced the players inside to the Bratton Tennis Center. The courts have already made a big difference, according to Whitman Tennis Coach Jeff Northam.

“They help speed up [the tournament] a ton. Going from eight to 10 [courts] is a huge difference,” said Northam.

Not only do they help with the timing, the new outdoor courts improve the overall quality of the program.

This difference was intentional, according to La Cava.

“The thinking was that we’d get better practices because our rallies would last longer,” he said.

“You have to be patient out there, it’s just a different style of play. It’s tough, but it’s also really nice having them,” said Dewitt-Hoger.

La Cava, who played two matches on Saturday outside during wind gusts of up to 30 miles per hour, agreed.

“It was definitely an experience because it was cold and windy,” said La Cava. “Some people would feel a big gust of wind and then wait to start the point.”

According to the tournament results, though, the Whitman team had a much easier time adjusting than the other participants.

“I understand people’s worry that the addition of two courts would look intrusive; however, the college did a great job with the landscaping and I think the area ended up looking great,” said La Cava.

He also mentioned other seemingly innocuous details, such as the black fencing, blue and green courts (the old courts were red and green) and low railings on the sides of the court that give spectators a better view of the courts than the chain-link fence that surrounded the older courts.

The new courts may have substantial impacts in the team’s recruitment as well.

“Those courts are beautiful and right in the middle of campus,” said Northam. “I’m expecting it will help.”

In fact, it already has. Dewitt-Hoger, one of two first-years who made the varsity team, said that the new courts were an integral part of his coming to Whitman.

“I came here and I saw there were four courts in the middle of campus, then I heard they were adding two more and it just made it the perfect situation,” said Dewitt-Hoger. It seems that the courts are already exceeding expectations.

The weekend was a red-letter weekend for Whitman tennis. Everybody, especially Northam, enjoyed both the tournament and the courts.

“They’re great, all the players love them. They’re beautiful, they play great, it’s a first class facility,” he said.

He could have just as easily been describing his team, as the Missionaries played beautifully and looked like they were easily the class of the league.

“We’re pretty deep all the way through,” said Northam.

That depth paid off this past weekend and should continue to do so for the rest of the year. With the Missionaries performing like this, it looks like the new tennis courts will be worth the investment.