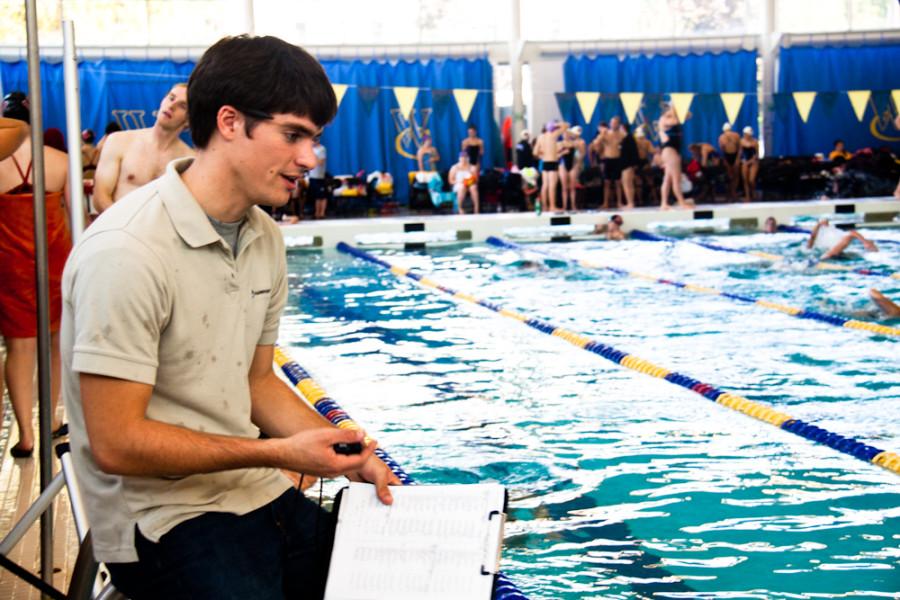 University of Rochester, Class of 2011

How did you get involved with coaching swimming at Whitman?

I was looking for a job in coaching during the summer and used the NCAA coaching site to find the position. I was working as an engineer for a biomedical company, and I wasn’t really happy with it. I’d rather do something I’m happy with.

I was four-year varsity and a five-time school record holder, except they’re going to be broken soon [Laughs].   I recruited my replacement too soon.  [Rochester] was less of a supportive team atmosphere, but it was still something I enjoyed a lot.

Favorite moment from your collegiate career?

I finished third  at conference one year in the 100 backstroke. Also breaking a school record that was older than I was: that was pretty cool. It was set in 1984. I said that this was my favorite swimming memory in an article about our team. The guy whose record I broke sent an email to our coaches and said he was glad this was one of my favorite swimming memories but to “remind [Howard] that I’m still better than he is.”

I like to get “garbage plates,” which is a Rochester regional thing. It’s a mac salad with home fries on top with two hamburger patties topped with chili and hot sauce. That was only for afternoon meets. My best-ever dual meet was after I ate one of those on a four-hour bus ride . . . though I wouldn’t suggest it as a meal for right before a meet.

Could you compete against any of your Whitman swimmers?

[Laughs] I swam against (first-year) Nic Win the other day [in the 50 yard backstroke at the Alumni Meet] and he out-touched me. Everybody made fun of me for taking second. I would have had him, too, if I didn’t mess up my start.

What are you looking forward to this season?

I’m looking forward to breaking records and going to the NCAA’s. We have a group of swimmers right now who are extremely capable of both. I also have a little bet with my assistant coach at Rochester that we score more points at the NCAA’s than they do, so we have to get there. We don’t have terms yet . . . there will be terms. Maybe I’ll shave his head after he loses. He would look really bad with that.

I hear you have a story about your dog and a cross-country road trip . . .

My dog and I drove from Massachusets to [Walla Walla] in four days. That’s around 3000 miles. It was clear across the United States. It was a long drive, a lot of driving every day. There’s a lot more farmlands in America than I originally anticipated, but it was good. [My dog] looked like she wanted to kill me half the time, but she made it.

What is your favorite non-swimming activity?

I’ve gotten really into cycling lately. I ride my bike to work every day. Last summer was my first cycling season. I did a bunch of races in Massachusetts, New York, that region.

Cycling’s pretty intense. That transition must have been a little weird.

It was interesting: coming from swimming I had really good aerobic shape but it was a really rough transition at first. Turns out you need to do more than just breathe.

What’s one activity that you’ve tried and discovered you are really no good at?

I didn’t think that I was going to be any good at this, but my girlfriend made me take ballroom dancing classes, and I really am no good. I’m also frustratingly bad at water polo. Just have no coordination.

Okay, you’re hypothetically competing in a team medley for an NCAA title: Which leg are you swimming and which three current Whitman swimmers are on your team?