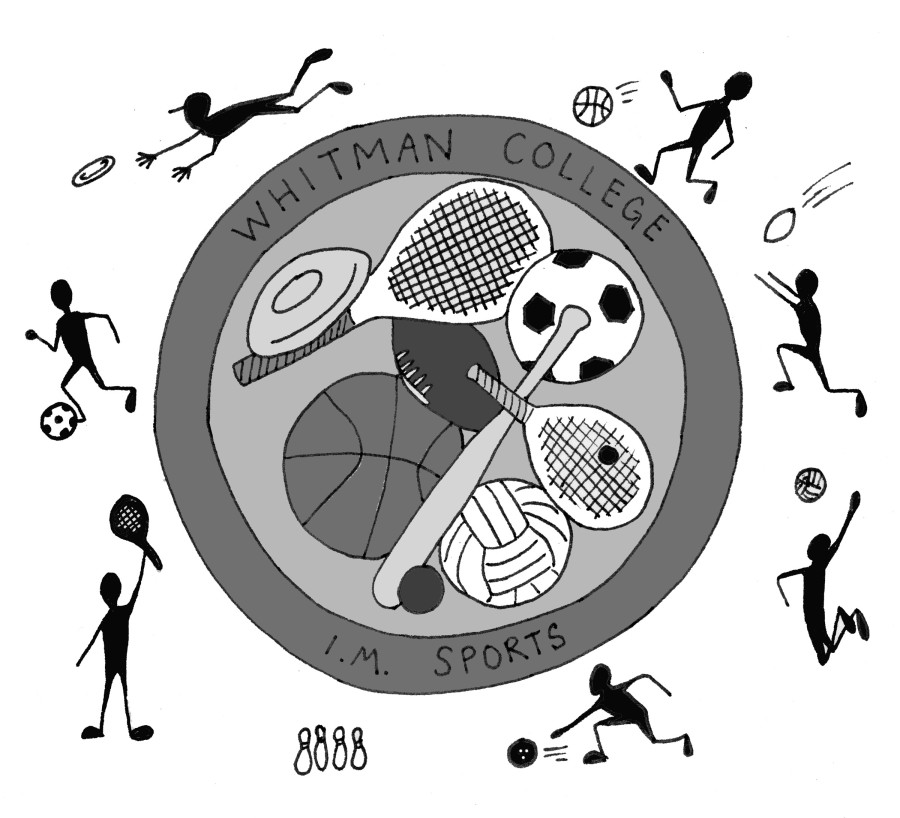 As most students sat sunken into library couch cushions or quiet room bean-bag chairs the Monday before Thanksgiving Break, Whitman’s intramural dodgeball teams began the first day of their 2011 season in the Sherwood racquet-ball courts.

Hearing the smack of rubber on concrete mingled with the shouts of players at war beyond the square glass windows on the racquet-ball court doors, it’s difficult not to want to join in. This playful atmosphere appears to be the allure of all intramural sports at Whitman.

“[In IMs it’s a] come one, come all atmosphere. Everyone acknowledges that they’re not the best at that sport, but you approach it in a more funny way,” said junior Molly Esteve, Captain of a Division 2 Dodgeball team called Team Angst and player for this year’s IM football champions, the Effin’ As.

IM players dedicate themselves to their sport at the level they see fit.

“One guy on our [dodgeball] team watched Youtube to help prepare, and he actually got better,” said Esteve.

“For Dodgeball . . . the games can get intense, but no one practices for them. We just show up and throw a ball around,” said senior Eric Tolleson.

“One girl’s team even did a voluntary dry season,” said Tolleson on IM football. “But mostly we show up to have fun.”

There are four or five sports each IM season: football, tennis, soccer and dodgeball in the fall and softball, basketball, frisbee and volleyball in the spring.

Many IM athletes will play multiple sports during both seasons. The captain of the dodgeball team Tendercats, Tolleson has been involved in IM sports since sophomore year and has played eight out of the nine intramural sports available at Whitman.

“The first one I played was [football]. Some friends in [my dorm] asked me to play, and I missed it from high school,” said Tolleson.

With fees at 2 to 3 dollars per person, these sports are ideal for the Whitties who want to play for the joy of it. And through playing together, teammates often become long-term friends.

“I don’t know how I would have met [a lot of my current friends] outside of IMs. It’s a great networking opportunity among students,” said Tolleson.

“It was a section bonding thing our freshman year for football,” said Esteve. “It’s kept us together for the past three years, and it’s kind of fun getting to reunite over throwing balls at each other.”

The fun factor is present for all IM players at Whitman, and the great thing about IM sports is that they are open to every student to enjoy.

“The IM Committee is in place to organize the IM sports and make sure it’s accessible for everyone. We’re trying to get on as many listserves as possible so people can know when sign-ups are due and [when games are planned],” said sophomore IM Committee member and IM player Brian Choe.

“Playing [intramurals] . . . there’s not the commitment of a varsity sport, but it’s the same feeling and joy that you got in high school or playing sports before,” said Choe on the difference between IM and club or varsity athletics at Whitman.

“There’s less time commitment and less pressure, but you still get that thrill of competing. It’s why most people play sports,” said Tolleson.+