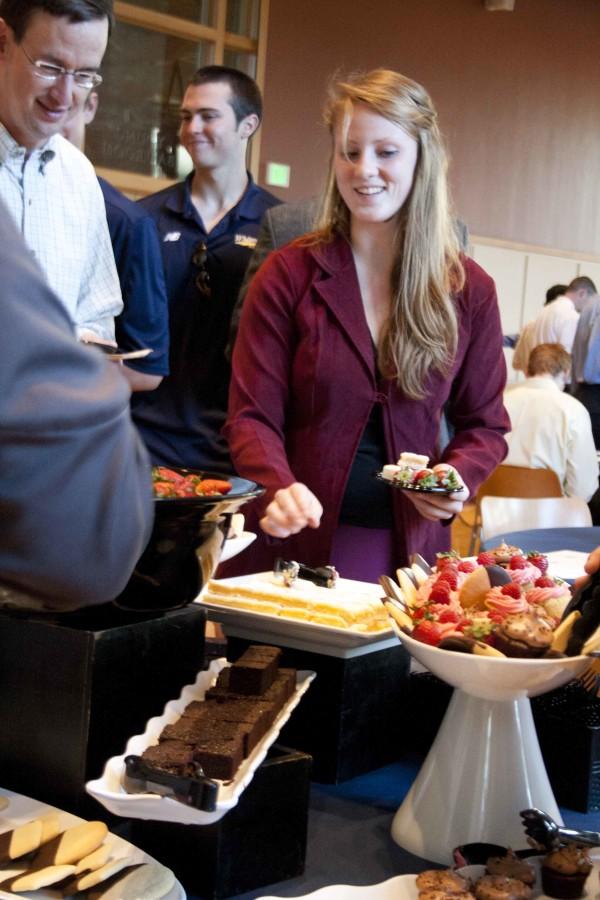 Players, coaches and staff from Whitman’s 14 varsity teams gathered together to celebrate what is regarded as the most successful year in Whitman athletics. Achievements were celebrated in the form of 13 different awards, given to teams and outstanding individuals.

The night began by celebrating excellence in the classroom, as 82 Missionaries (34% of all varsity athletes) were named 2011 Northwest Conference Academic All-Conference, which honors all the student-athletes from the NWC with a cumulative GPA of 3.5 or above. Conor Holton-Burke (tennis), Brian Wakefield (swimming), Kevin Dyer (swimming), Nate Wells (swimming) and Helen Jenne (swimming) were also recognized individually for having the top five GPAs of all Whitman student-athletes.

Next on the docket were a slew of team and individual awards. All 14 varsity teams were represented in the pool of nominees for each award, with the winners coming from a number of different sports.

The George Ball Sportsmanship Award was given to Whitman Baseball as the team that most embodies Whitman athletics and giving back to the community.

Special recognition was given to the three Whitman coaches who were named NWC Coach of the Year by a vote of their peers in their respective sports. Jennifer Blomme was named Co-Coach of the Year for women’s swimming, after winning the award for the men’s program last year. With Blomme at the helm, Whitman swimmers enjoyed unprecedented success all season, culminating in the shattering of 15 school records at the NWC Championships. Jeff Northam earned the honor after leading the Whitman men’s tennis team to the NWC tournament championship after finishing the regular season undefeated.  Mike Washington led the men’s soccer team to a second-place finish for the second time in three years and came within three points of the NWC’s automatic bid to the NCAA tournament.

Two student-athletes from each class were recognized for their athletic achievement on the field, on the court, or in the pool with the Most Outstanding Performer Awards.

First-years Jillian Davis (volleyball), Josh Duckworth (basketball) and Andrew La Cava (tennis) were awarded the Freshman Most Outstanding Performer Awards, with Duckworth and La Cava being co-recipients. Davis, an outside hitter from El Paso, TX, led her team with 378 kills on the season and was named the NCAA DIII West Region Freshman of the Year by the American Volleyball Coaches Association. Duckworth, a guard from Lost Angeles, CA, averaged 12.5 points per game and was named the NCAA DIII West Region Rookie of the Year by D3hoops.com. La Cava (Bellevue, WA) was named to the NWC First Team and was undefeated for the season at No. 2 singles.

The Sophomore Most Outstanding Performer Awards went to a pair of swimmers, Katie Chapman and Paul Chang. Chapman (Redmond, WA) broke school records in two of her three races at the NWC Championships on her way to being the first Missionary to be named Women’s Outstanding Swimmer of the Meet. Chang (Carson City, NV) also set a school record at the NWC Championships with his second-place finish in the 200-yard breaststroke.

Conor Holton-Burke (Boulder, CO) and Jenele Peterson (Redondo Beach, CA)  received the Junior Most Outstanding Performer Awards, named the Bob Burgess Award and Jayne McCarthy Award, respectively. Holton-Burke (tennis) was the seventh Whitman tennis player  in the last 11 years to earn NWC Player of the Year honors and played the entire season at No. 1 singles and No. 1 doubles, pairing with La Cava. Peterson (basketball) averaged 13.6 points per game on route to being named to the NWC First Team.

The Max Seachris Award (Senior Male Most Outstanding Performer) went to soccer co-captain Cooper Crosby. Crosby, a defender from Vashon, WA, led the Missionaries in minutes played this season and scored the game-winning goal in 2OT against Pacific. He finished the season by being named to the NWC First Team, the third straight year he has been honored on an All-Conference Team.

The final individual awards were the prestigious Borleske Awards, given to two seniors who epitomize Whitman athletics in competition and the classroom.

The Mignon  Borleske Award was given to tennis ace Elise Otto. Otto (Spokane, WA) had a 13-5 overall record in singles this season, and along with doubles partner sophomore Alyssa Roberg is ranked No. 7 in the West Region amongst all doubles teams.

Two seniors were named co-recipients of the R.V. Borleske Award: Justin Artis (basketball) and Etienne Moshevich (tennis). Artis (Tacoma, WA) averaged 8.5 points and 3.9 rebounds in starting all but one game during his senior campaign. Moshevich (Richmond, BC) spent most of the season at No. 3 singles en route to being named to the NWC First-Team for the second time in three years.

The night finished off with Sean Kinney receiving special recognition from the Student-Athlete Advisory Committee (SAAC) for all of the hard work he has put in this year as Game Management Coordinator. Kinney is also an assistant coach with the baseball team.

It was a night that celebrated all the success that Whitties have achieved in 2010-11. And with all the excellence that was exhibited this year, the future looks bright for Whitman Varsity Athletics.