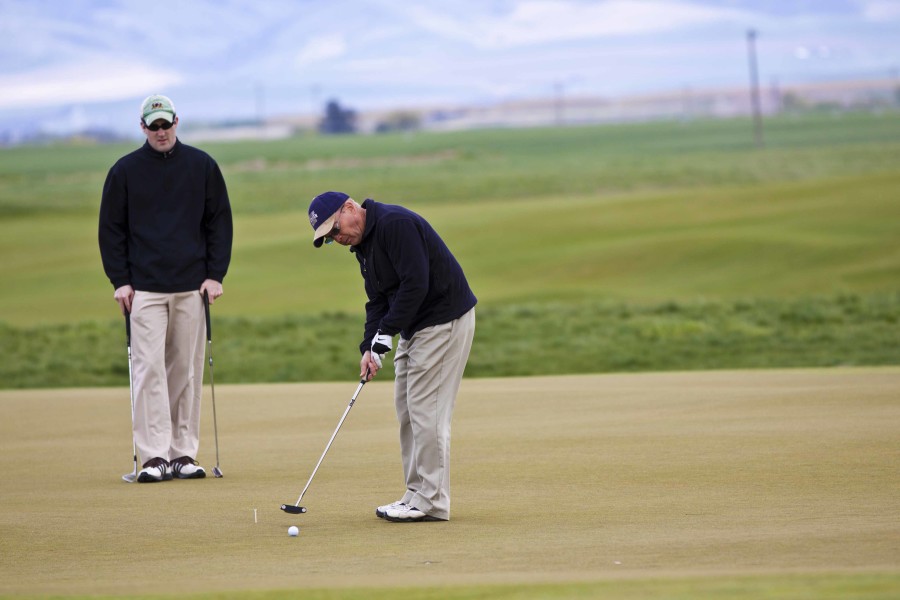 Every day, the W Club strives to foster excellence on and off the field of competition. Last Friday, it turned to fostering connections between former and current Whitman student-athletes at the second annual W Club Golf Tournament.

At Whitman, the W Club is an athletic booster group made up of alumni, parents and staff members led by president George Osborne ’66. This year, the W Club and Whitman varsity golf teamed up to put on the alumni golf tournament.

The main goals for the tournament were to bring people in the Whitman community together, have a good time and promote athletics, according to varsity golf head coach Skip Molitor.  The tournament was also an opportunity to raise money in support of Whitman varsity athletics. All of the varsity programs were represented at the tournament, primarily through student-athlete volunteers.

The 80 players in attendance included current Whitman varsity coaches and athletes, students, W Club members, parents, and other alumni. Held at the Wine Valley Golf Course just outside of Walla Walla, the players competed in 20 groups to play 18 holes of golf in both a scramble and team best ball format. Following the competition a banquet was held to celebrate both the tournament and a year in sports at Whitman.

“[The tournament] is a great place to connect W Club members with athletes,” said Molitor.

Each group was comprised of four players, many quartets including at least one current student. The chance to meet and talk made the experience a rewarding one for all players involved, as the students were able to get to know and make connections with alumni and alumni were able to learn a little bit about the latest group of Whittie athletes.

While W Club members receive weekly e-mails updating them on the goings-on in Whitman athletics, the golf tournament allowed them to make face-to-face connections with the student-athletes who represent the school every day and experience the importance that varsity athletics holds on campus.

“[The alumni] were genuinely interested in what each of the programs was doing,” said first-year and varsity golfer Elaine  Whaley.

The tournament also served as way to raise money for the various varsity athletics programs. Those fund-raising techniques came in the form of donations, sponsorships –– of players and holes on the course –– and a raffle drawing for auction items. According to Molitor, the tournament hopes to raise 10,000 dollars from its various fund-raising methods.

The tournament was a success from all standpoints and not even the cool, blustery day could keep the players from enjoying themselves. The W Club was able to raise money while encouraging the establishment of connections between alumni and current student-athletes, checking off each of Molitor’s goals for the tournament.

“[The tournament] was definitely rewarding because [the alumni] have given back so much to our athletics,” said Whaley. “We had a chance to show them how much it meant, how much their support means to all our varsity athletes.”

“It [was] as much of a friend-raiser as a fundraiser,” said Molitor.