Whitman Sweets gear up to compete in NCAA Division I 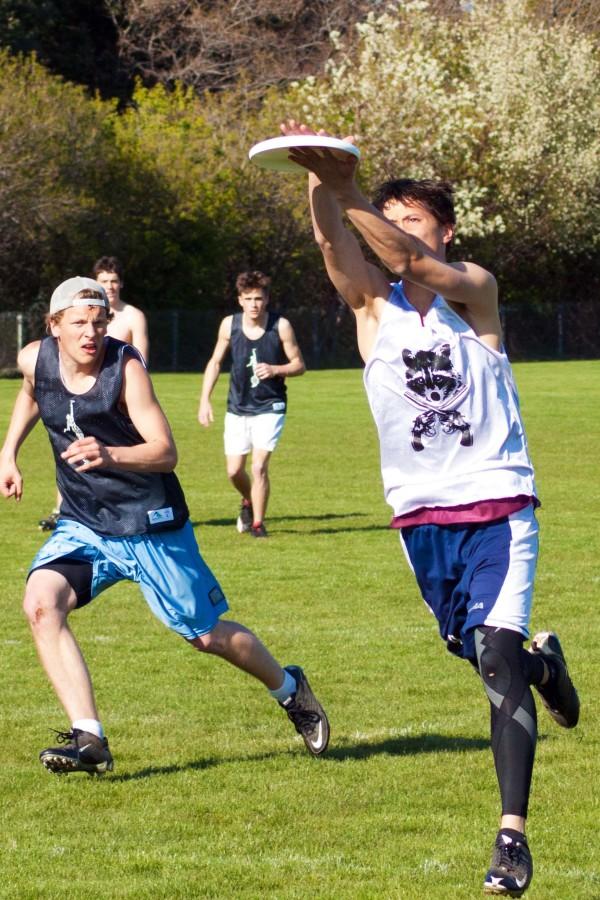 Done with a regular season characterized by solid success, the small town Whitman Sweets are gearing up to compete with the big guns of NCAA Division I Ultimate.

After an undefeated run through the Division III Conference Tournament April 16-17, with a field that included the defending DIII national champions Pacific Lutheran University, the women’s Ultimate team has turned their eyes towards the next prize: placing at Division I regionals, with a chance to go on to compete for a national title. The men’s Ultimate team, the Sweets, also swept through the conference tournament and chose to compete at DI regionals to continue their postseason run. A top-three finish for either team would qualify them for DI nationals.

Prior to the season, the conference restructured its postseason tournament. DIII regionals was changed to the DIII Conference Championships, and the number of bids from each conference was cut from three to one. Last year, the Lady Sweets barely qualified for regionals and finished in fourth place. This year, they won the entire tournament.

“Everyone just stepped it up so much [at Conference],” said sophomore captain Natalie Jamerson. “There wasn’t one weak link, everyone gave it their all. We worked hard and found success with that.”

Finishing first out of six teams at the DIII Conference qualified Whitman for two choices at further postseason play, one being competing at DIII nationals in New York and the other being going for glory: competing at DI regionals. With little hesitation, this group of Whitties chose the latter.

“It was really rewarding to win [DIII Conference] and see all that hard work really pay off and see each other coming together as a team,” said sophomore captain Kelley Hall. “It was so powerful to see ourselves succeed. As a captain, it has created a lot of great momentum for the team going forward into regionals.”

Competing at DI regionals means a chance for the team to see how it stacks up against the stiffest competition in the Northwest, all of whom will be DI state schools including teams such as the University of Washington and the University of Oregon.

“We have the chance to really step up our game and give [those big schools] a run for their money,” said Jamerson. “Because we’ve been so successful this year, we’ve seen a lot of good victories. We’re going to play these DI schools and hopefully if we play well, we could go to DI nationals. That would be the first time that Whitman Ultimate will go to DI nationals.”

“[This season has] been beyond any of our expectations,” said Hall. “Obviously we know that have quite a bit of talent on our team, but it’s a team sport and team chemistry is always a bit up in the air until you start playing tournaments.”

For both the men’s and the women’s Ultimate teams, success came early and often this season. The mutual success, according to Jamerson, has brought the teams closer.

“[It] really inspired me that the guys’ team stepped up their game [at the Stanford Open in February],” said Jamerson. “That inspired me personally and that translated to the team that if we work hard toward something, we can accomplish it.”

“For such a small Ultimate program to win such big games was a huge success to the program, and spoke to the level of dedication of the players and the leadership of their captains,” said Katie Rouse ’10, a former Whitman Lady Sweet, referring to the performances of both men’s and women’s teams. “This has hands-down been the most successful season in the history of the Whitman Sweets for both teams.”

Adding to the glory of winning Conference for both the men’s and the women’s teams is the fact that both are the top-ranked DIII teams in the Northwest. The Sweets are ranked 17th nationally by USA Ultimate, while the Lady Sweets are 32nd nationally.

The tremendous success that the women’s team has experienced this season comes after a fourth place finish last season, as well as the loss of several key players due to graduation and injury. The many roster changes have left the team with just one senior and one junior, with the rest of the team being sophomores and first-years.

Led by Jamerson and Hall, the team has been united all season by a single goal: competing hard and winning DIII Conference. Now that the goal has been accomplished, the team can turn to the next challenge, which comes May 7 and 8 in Burlington, Wash.

“[Our victory] would be a very big upset in college Ultimate, but as a captain that’s what I’ve been setting our goal to be,” said Hall. “It’s not out of our reach to do well in the tournament.”

Eight teams will compete at DI regionals, seven of which will be the DI teams that win their own conference tournaments next weekend. Whitman will join those seven teams in Burlington. Qualifying for DI nationals would be a first in the history of an Ultimate program that dates back over two decades.

“I’m really hopeful for [DI] regionals,” said Jamerson. “I think it’ll be a little bit of a different atmosphere because we won’t be the best team and we’ll have to face adversity. It’ll ask a lot of us and I think it will be a good opportunity to bring out the fighting, really competitive spirit that’s in all of us.”