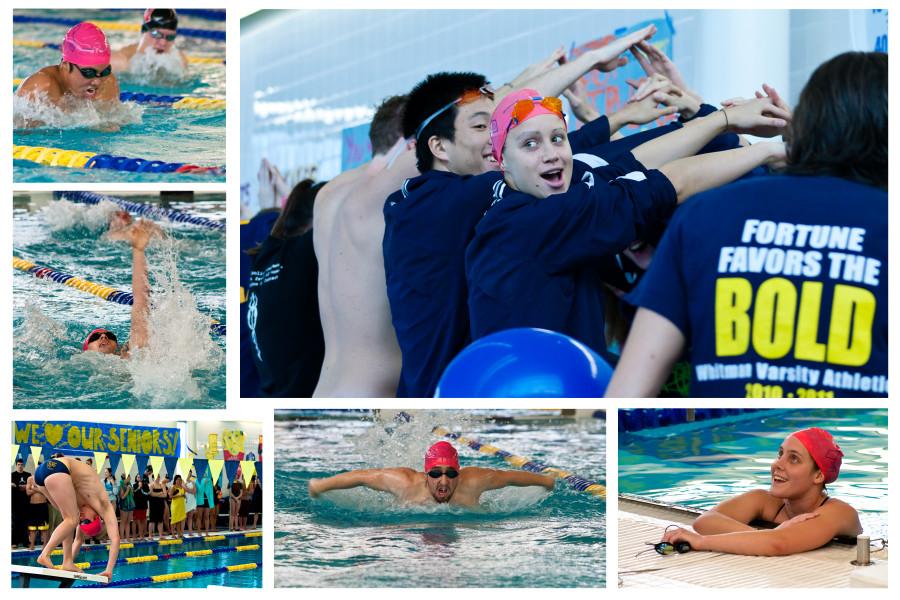 Saturday, Feb. 5 the Whitman College swim teams raced against Whitworth University in their final regular meet of the season. While Whitworth was heavily favored to win against both teams, and pulled off an impressive victory, Whitman showed its competitive spirit and energy as the team closed their regular season and recognized its senior swimmers.

The scores–170, 91 for the men and 171, 91 for the women–failed to reflect the competitiveness of the races. Overall, Whitman swimmers placed in the top three of all but three of the 28 events, making a total of 33 top three appearances.

Sophomore Kevin Dyer came from behind to place first in the 1,650 freestyle, which proved to be one of the most exciting victories of the night. Later in the meet fellow sophomore Paul Chang–racing Rory Buck, one of the fastest breaststrokers in NCAA DIII swimming–broke Whitman’s 100-yard breaststroke record with a time of 1:00.18.

In Harvey Pool at the Baker Ferguson Fitness Center the Whitman team was cheering and dancing just as loudly as the fans. Regardless of the swim team’s underdog label, they did not show signs of defeat.

The supportive nature of the team was complemented by the eager fans filling the stands. The entire TKE initiating class came out in support during the longest and, perhaps most stressful, mile-long race. The TKEs sang out a chorus of baseball classic “Take Me Out to the Ball Game” and Queen’s “We Will Rock You” to urge Dyer to victory.

“The TKE pledges were there in full force. They stayed for the longest events,” said Ryle. “Whitworth commented that they never got that kind of cheering at home.”

“We are notorious for being the most spirited team in the conference,” said sophomore swimmer Andrew Roehrig.

These two senior classes have come to characterize their respective teams.

“My class, for guys, was the first large, solid [swim] class at Whitman,” said senior Brian Wakefield. “We worked really hard to ensure the continued success of the Whitman program … [For both teams the seniors exemplify] a kind word after a bad swim, a high-five after a good swim. We lead by example and are interested in each others’ successes.”

In the past four years the men’s swim team has gone from being at the bottom of the league to finishing third in conference. When the team goes to the Northwest Conference Championships in a few weeks they will have a chance to challenge Puget Sound for second place in the conference. In the meantime, the men end their dual meet season with a 5-2 record.

For years Whitman’s women’s team has been one of the most popular varsity sports at Whitman. This year’s program not only maintained the dynamic of years past, but also became one of the most spirited sports on campus.

The team hangs on the border between fourth and third after Lewis & Clark College moved ahead of them in the regular season standings. At conference they will have a chance to avenge last year’s razor-thin one point loss and move up in the rankings to end the season third in the conference. Without a doubt, the seniors will be integral to their improvement when they race at conference.

The spirit the seniors have brought to the team definitely shone through at last weekend’s meet against Whitworth.

“[We] cheer for everyone,” said sophomore swimmer Rebecca Ryle, citing “mom of the team” senior Ali Schlueter as a leader in team spirit. “Everyone was there to have fun. Music started playing at the break, everyone was dancing. It turned into a dance-off.”