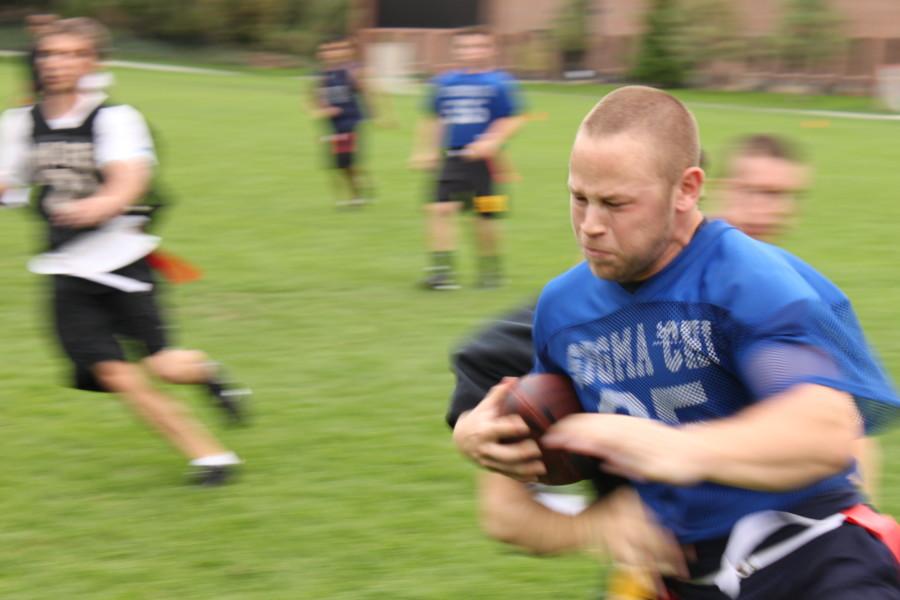 As a member of NCAA Division III and the Northwest Conference, Whitman College is the home of 14 varsity teams, including basketball, cross country and baseball. Whitman varsity athletes make up about 25 percent of the student body and represent Whitman across the Pacific Northwest. There is another community of athletes, however, that involves an even greater number of Whitties: Intramural (IM) sports.

Whitman has nine IM sports, ranging from the traditional football and soccer to the somewhat more unusual bowling and ultimate Frisbee. IM sports are divided into two seasons: four sports in the fall and five in the spring. In general, students will divide up into teams for each season and those teams will bond together to participate in multiple sports.

Whether you’re a first-year or a senior, getting involved in IM sports isn’t a daunting task in the least. Fraternities are almost always represented by teams in both IM sports seasons, and are usually a mainstay in whatever sport is currently going on according to IM coordinator senior Jeffrey Gayle. First-years can be integrated into older teams, especially with men’s football. On the women’s side, the teams tend to be made up of section mates who stick together throughout their time at Whitman.

IM sports have already made an impact on many first-years, whether it is forming teams for football or soaking up the experience of looking out your window and getting to watch games on the field.

“I just like that it’s really chill, [and] there are always games that you can watch out on Ankeny,” said first-year Claire Vezie.

One of the most intriguing aspects of IM sports is the potential for the creation of a “dynasty team,” which is a commonly used name to describe a team of students who have played IM sports together for several years and attained a high level of success. Anderson Hall Resident Director Kendra Vandree is a member of one of these dynasty teams, made up of a group of girls who lived in 3-West in Jewett Hall when they were first-years.

“To start, we weren’t serious at all, just trying to play a game that could be recognized as football,” said Vandree. “I think our competitiveness and seriousness has just evolved naturally as we ourselves have improved.”

Besides the potential for becoming a part of a dynasty team, there is a community dynamic that helps bring Whitman students together.

“I think the greatest benefit of IM sports is the community aspect that is created,” said Gayle. “It’s fun to have games on a weekend against friends that [gives] a sense of bragging rights or competition. IM sports are also a fun way to relax after a tough week or to take a break from studying if that’s needed.”

“I like that IM sports can be whatever you make of them,” said Vandree. “They’re an avenue to play competitive sports if you want or you can dress up in costumes for every volleyball game and congratulate your teammates for being in the right place at the right time.”

Students aren’t the only ones who have the opportunity to play IM sports.

“Faculty, staff and anyone else who is paid by Whitman are allowed to play,” said Gayle. “You may come out to Ankeny one afternoon and see the athletic coaches training for soccer, or faculty members playing football.

The bottom line: no matter who you are or what you like to do, IM sports are always an option, whether for exercising stored athletic prowess or simply giving yourself the opportunity to take a break from studying and get out in the sun.

And for people like Vandree, IM sports will find a way to forever be a part of a student’s life.

“I have a giant ball of positive emotion that roils about in my heart when I think of my football team,” said Vandree. “I think that’s pretty fun.”