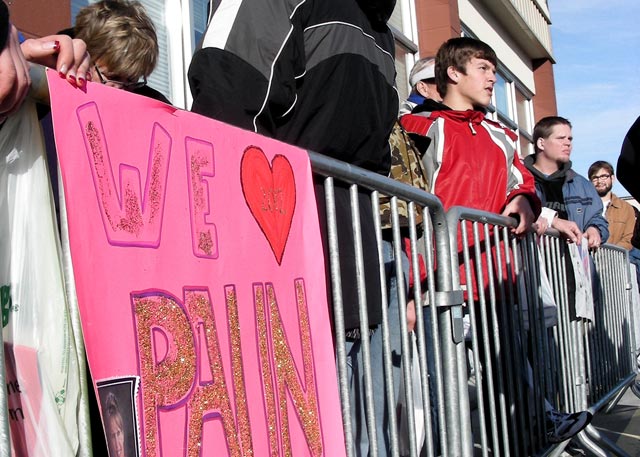 They came with the night, ready to brave the cold. They were armed with sleeping bags, propane heaters and hot coffee. They came 24 hours before Sarah Palin would arrive at the Hastings bookstore in Richland, Wash. on November 29  because they were true believers.

“She’s the first politician in the last 20 years I’ve admired,” one man waiting in line said.

Palin has all of the hallmarks of a charismatic leader and populist politician. The die-hard Palinites that stoically bore the cold Saturday night were less inclined to talk about issues and more about Sarah: and indeed everyone in line was on a first name basis with Palin.

Her supporters confirmed that there was something different about Palin that drew them unlike any other candidate.

“She’s not an ordinary politician . . . if it were Mike Huckabee or Romney . . . you wouldn’t see a line like this,” said Jeff of Camas, Wash.

So if it isn’t her policies, what is it about Sarah Palin that is making everyone from grandmothers to college students and children wait for dozens of hours in freezing cold weather just for a signature and a glimpse of the one-time vice-presidential candidate and half-term governor of Alaska?

I found that among her supporters there are three things about Palin that set her apart.

First, “She’s one of us,” said Donna of Richland.

“She not only talks the talk, she walks the walk,” said Erin of Richland, with conviction.

Finally, both men and women waiting in line were quick to say that Palin could be our first female president.

“She is a great woman leader,” Kelsey, a sophomore at WSU, said,  and though she might not win, Kelsey was confident that Palin is forging new opportunities for women in politics.

There was consensus among the people waiting in line that night that Sarah Palin was “average” and represented common people’s interests. Comments along this line ranged from her origins in rural America to her speaking style.  When I asked what she liked so much about Palin, Donna answered that Palin is “small town [and] honest” and that “she talks on an average level, so people can understand.”

Indeed, almost every person I interviewed mentioned that Palin just talks “common sense” or “tells it like it is.”

In the same vein, a concern emanated from Palin’s supporters about their lack of representation in the mainstream media and political structure. Many of these concerns were expressed in terms of economics.

“There’s no way people can spend that much money and we still come out,” said Tara of Eltopia, Wash.  when discussing the influence of money on politics.

There was also the feeling that average people weren’t benefiting from government policies, particularly regarding Obama’s response to the recession.

“[The government is] bailing out people when they don’t need it and keeps paying their top people millions,” said Donna with dismay.

Chris of Richland echoed this sentiment.

However, there was also a more fundamental question of integrity underlying many people’s comments. A common viewpoint was that the people with power, whether in the government or media, are corrupt compared to average Americans.

“The corruption, getting rid of the corruption,” said Nancy of Richland, on what issue was important to her.  “We’ve just seen people who are a minority talking and making laws while the majority sits back.”

The image of Palin as the outsider, the common person coming in and cleaning up politics was reiterated by Josh, who grew up in Alaska.

“[I’ve] seen firsthand Alaska politics and corruption,” said Josh. He went on to say that he was impressed by Palin’s ability to confront corrupt oil companies and politicians there.

It appears that the most significant aspect of Palin’s appeal is indeed people’s  sense of alienation from power, and more specifically from the powerful themselves, that many Americans feel today.

“She Walks the Walk”

An enormous part of the enthusiasm I encountered derived from how Palin didn’t just advocate ideas, but lived her values.

“[Palin has] good American values, good family, and she shows us through her own family what should be happening,” said Kelsey, the WSU student.

Paradoxically, yet perhaps profoundly, perceptions of Palin’s values were not derived from her and her family’s perfection but rather their struggles. While speaking about the pregnancy of Palin’s daughter Bristol, Kelsey reiterated that “they are a real American family; they aren’t perfect,” and contrasted them with the seemingly perfect Obama family.

If there is one issue that did seem important to everyone to whom I spoke, it was abortion. It was on this issue perhaps more than anything that Palin inspired admiration and respect among her supporters. In case you don’t know, Palin’s son Trig has Down syndrome and Palin made the decision not to have an abortion despite this fact.

For Jeff, Palin’s decision not to abort Trig is intensely personal.

“I feel a lot of similarities between me and Trig. My mom told me some things about her similar situation and Sarah’s,” he said.

Kelsey also expressed admiration for Palin’s strength in choosing to have her son, though she added that she didn’t know what she would do regarding an unwanted pregnancy.

When I asked Erin which of Palin’s stands on issues resonated with her she also brought up abortion.

“[Her] pro-life [stance] for sure, especially since she has her son. She could have had an abortion, but she didn’t. I really respect that,” she said.

It is easy to be cynical about any political movement driven by a charismatic personality. But Palin’s supporters revealed a deep identification with the struggle to live out your values in an often-hostile society. I couldn’t help but admire them greatly for their thoughtfulness.

When my friend, senior Matt Ozuna, inquired whether Jeff thought America was ready for a female President, Jeff’s retort was quick.

“I’m ready for a female president!”

“I hope she is the first female president of the U.S.A.!”

Palin’s status as a conservative female seemed to be an important animating factor in her appeal to many people who gathered to see her. Not everyone agreed that it was significant that Palin could possibly be the first female president.

“People make too much of whether someone is black or white, male or female,” one woman said.  Natasha, of the former USSR, was adamant that her gender was in no way related to her appeal.

Yet when I asked whether people think it’s important that Palin is female, others responded affirmatively.

Similarly, when I asked why she was waiting all night to see Palin, Kelsey immediately responded: “I’m out here because she is a great woman leader and we are women and young.”

Palin’s attractiveness as a female candidate seemed to be inseparable from her appeal as a conservative and, in particular, her stance on abortion.

“I think it is important that she is a woman and believes that . . . men don’t know what it’s like, but she does,” said Chloe of Pendleton, Ore. about the connection between Palin’s pro-life stance and her gender.

While perhaps the desire for a female president wouldn’t have driven the crowd in Richland to vote for Hilary Clinton, the possibility of a female presidential candidate that shared their values seemed to be a powerful driving force behind Palin’s popularity.

When I arrived back at the Hastings bookstore the morning of Palin’s arrival, the line had grown so long that it stretched well out of sight. I got back into my spot at the front of the line that had been diligently defended through the night.

Palin arrived to the high pitch screaming of her devoted fans, carrying a young child (her daughter’s?) in her arms, looking distinctly un-presidential in a poofy, flowery red top. The book-signing was a family affair, with her father, brother and other unrecognizable relatives all there to shake hands.

I met Sarah Palin, briefly, and she was interested enough to ask what I did for a living. I told her I wrote for my college’s newspaper and had the time to fire off one question:  “Are you the future of the Republican Party?”

She smirked, hesitated, gave a little laugh and responded coyly, “. . . Could be.”

Whether that prospect disturbs you or inspires you, one thing is for sure: Palin is a force to be reckoned with.