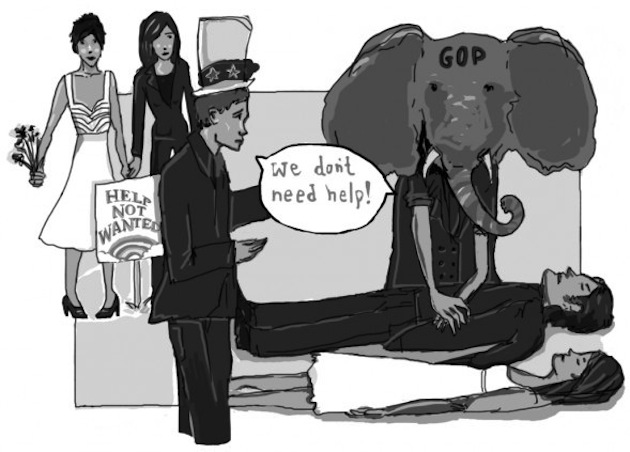 Many conservatives may be offended by the suggestion and many liberals may be dubious at best, but indeed gay marriage ought to be a conservative cause.

Conservatism is rooted in respect for tradition. Thus we often hear the right’s rhetoric touting the importance of “traditional” marriage contrary to what they see as dangerous innovations.

Respect for tradition comes from conservatism’s belief that the individual, in her limited life experience and reason, is a poor judge of big issues like morality and social norms, which represent the collective wisdom of dozens of generations. Edmund Burke wrote that ¨the individual is foolishâ€¦ but the species wise.”

The cost of radical change would be radical instability. It’s stability and the slow accumulation of rights and freedoms through struggle over centuries, not petty claims to entitlement, that have resulted in constitutional government and the rights Americans enjoy.

Yet often our traditions are inscribed with divine meaning and claimed to be universal truths. Political rights are often misconstrued as “universal” or “God-given” rights. Marriage carries religious, not only social and legal, meaning. Thus there exists a strong strain in American conservatism today that defends “traditional marriage” not on the basis of its “traditionality” but, in reality, on its divinity.

Conservatives should be wary of defending social institutions on conceptions of divinity.

The forced implementation of abstract concepts and ideals on human communities is the antithesis of conservatism that values organic social relations and institutions. It is this very kind of absolutist utopianism that conservatism has so avidly fought against in the battles with fascism, communism and socialism.

Conservative respect for tradition cannot become an unyielding refusal to modify existing social institutions to the demands of a new society. The true conservative has never opposed change per se.

Rather the conservative has advised that change be within the existing framework of institutions and norms, that it maintain continuity with the past rather than radically reinvent the present. Russell Kirk wrote, “Necessary changeâ€¦ ought to be gradual and discriminatory, never unfixing old interests at once.”

In fact, though he was referring to constitutional change, Burke placed the ability to change at the very heart of conservation when he said, “A state without some means of change is without the means of its conservation.”

With this conservative approach to tradition in mind, let’s turn to the issue of gay marriage and make a conservative judgment of its merit based on past tradition, current society and the question of continuity.

According to USA Today, the marriage rate has declined 50 percent since 1970. Instead, couples are simply cohabiting. While I personally don’t condemn cohabitation, it isn’t a replacement for marriage. Marriage is preferable particularly when raising children, since cohabitation is a less stable family arrangement.

The campaign for gay marriage actually positively reaffirms the value of marriage in today’s society. Gays have been willing to fight tooth and nail for the right not to simply cohabit but to create more stable, permanent and family-building relationships.

Though a religious understanding of marriage and the immorality of homosexuality have dominated gay marriage discourse within American conservatism, it’s time for conservatives to realize that gays are not advocating for sexual revolution, but simply social and legal inclusion.

Indeed, many of the counterproposals like civil unions for all couples rather than “marriage” (which I used to support), or the state giving up any role in sanctioning relationships, are truly “revolutionary” and would dramatically effect the current understanding of state-sanctioned marriage in the U.S. Full inclusion into the current marital institution is by far the most “conservative” option.

The institution of marriage is under true threat, both socially and philosophically. Gays are not arguing like radical feminists for the downfall of marriage as an institution. They are not advocating for the state to stop recognizing any kind of relationship or to give legal sanction to other forms of relationships like polygamy.

No, gays are asking to become a part of a dying institution that they still see as imbued with positive personal value and social desirability.

For that, gays and their quest for marriage should be championed by true, tradition-loving conservatives who want to begin rebuilding the American family.