A quick critique of our liberal bubble 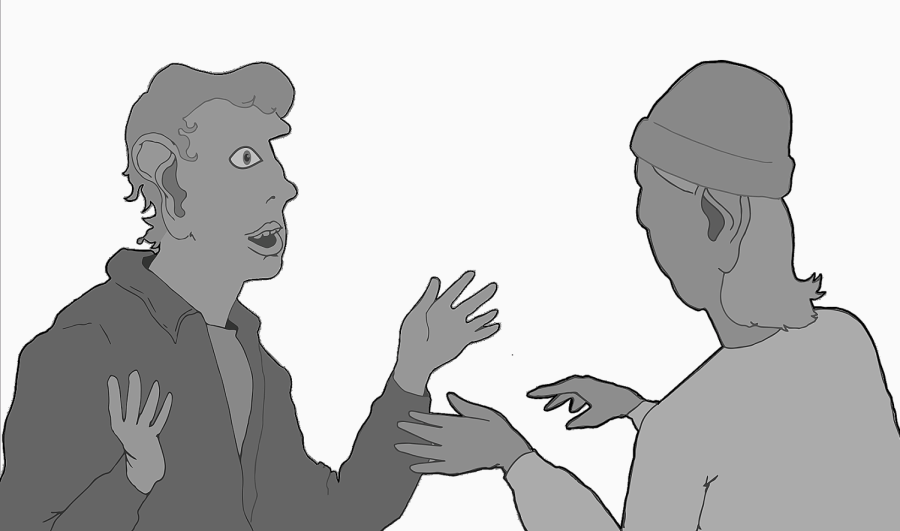 In any hyperpolitical age there comes a time when the rational and moral capacity of the people on the other side is called into question. We are in such a time now. This division of beliefs and values is so deeply personal that we are consciously repulsed by the other side, and the rhetoric around our opposition pulls at our heartstrings. In our social groups we share our feelings of disgust at anti-vaxxers and pro-lifers, and we accuse them of being “apathetic,” “selfish,” or “blatantly cruel.”

Here at Whitman we undoubtedly have a divide such as this. The majority of our campus is leftist and has been for a while, and with a distinct lack of outspoken conservatives, we are opposing a sort of “ideological” right, rather than the Republicans who exist on campus. This would not be so bad if it weren’t for the equally distinct lack of “ideologically” right arguments in The Wire and everyday political discussions, or if this divide didn’t also scare the shit out of the actual Republicans here who have upwards of 90 percent of the campus “against” them.

How bad is this divide, really? First and foremost, the majority of the campus exists in opposition to the hypothetical “right” as is represented by the media or education. The first problem is that conservative ideas have significantly less representation in our classrooms. I won’t claim to know the whole curriculum of each politics course, but of all those listed in the politics catalog, only one mentions “conservatism” in its brief course description (313 Tocqueville and Democratic Theory). I took an Intro To The Political Right course last year, but the class is no longer offered.

The second problem stems from the first; with a lack of political representation, Republican arguments are completely abstracted. We lack the political fluency to understand the philosophy behind those arguments, as well as the ability to accurately represent the right’s side in political discussions or Wire articles. This poses a few more issues: we cannot fairly examine our own political biases without these ideological challenges, nor can we fairly argue against conservative arguments if we don’t fully understand them. Furthermore, right-leaning students are not given the opportunity to learn more about their views or structure their arguments to fairly challenge ours. This lack of openness in the classroom discourages students from speaking out or exploring conservative ideas, serves to further insulate leftists from the right, and further isolates Republicans from the left.

This brings me to perhaps the most insidious aspect of this: when we are opposed to a hypothetical ideology that we rarely ever have to confront, it is easy to mistake the whole ideology as totally irrational and immoral. This is only exacerbated by the ridiculous representation of right-leaning views in the news, but more prominently by our refusal to even ever acknowledge conservative arguments.

We each have a role to play in creating our campus culture—think about how many conversations we have on a daily basis. When we don’t ever talk about conservatism in a fair and critical light, we are showing others that that is the social norm here. By contributing to the norm of not addressing conservative arguments, we are not leaving room in daily conversations for conservative people to feel at ease sharing their views.

This feels, and to an extent is, a personal attack on conservatives. Don’t get me wrong, they are hardly victims, but they are a clear minority on campus. When we don’t even care to address their views in our casual political discussions, it must seem like we all, by default, assume that conservative arguments are wrong. To an extent, we do. If we felt that the right-wing perspective had something to offer, or contributed any real moral or rational value to our conversations, we would include it. The tragedy of this is that it is really just down to a lack of understanding on our part. But this lack of understanding is actively contributing to a campus culture that isolates conservative people and alienates them from the majority of our political discussions. It potentially makes them feel like we assume they are less rational or moral than us, based on their views, and in a way, they are right.

We are in a highly politicized time and are rarely exposed to the real perspectives of those on the other side. With tensions this high, we are left questioning the moral and rational capacity of others. While we are all fairly open-minded and would likely at least listen to the conservative perspective if it was presented to us, my point is that we should be doing more to make room for that perspective. Whether it is writing from the viewpoint of the right for articles or presenting that perspective in class, we should aim to engage with these ideas and make our conservative peers feel like they have an esteemed place amongst our ranks. They undoubtedly have a lot to offer, and it would greatly serve our campus if we made a concerted effort to include them.

To start, here are some helpful links: