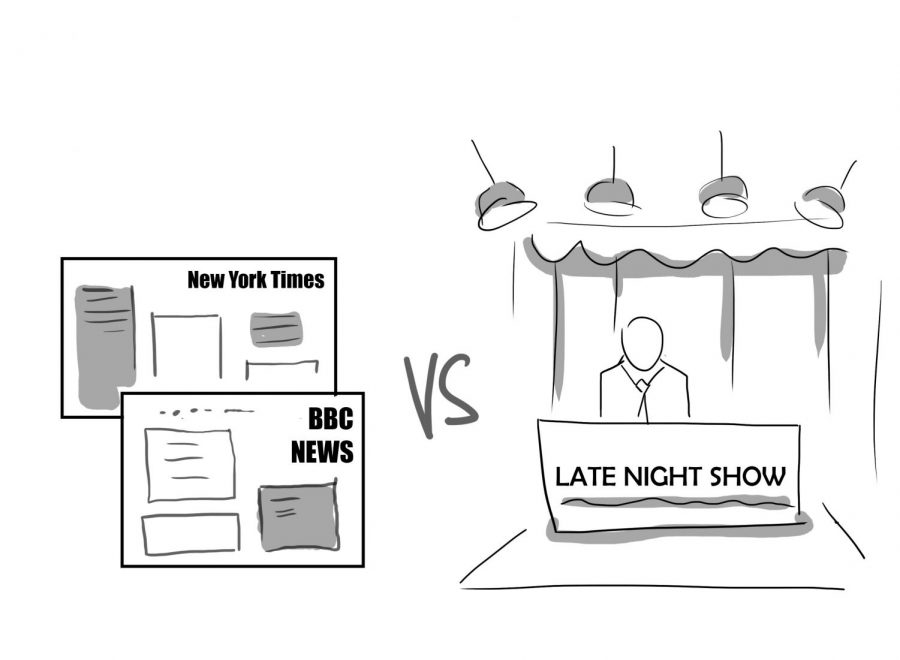 During these turbulent and controversial times in politics, it has been interesting to watch the many examples of late-night hosts and comedians who have taken on the role of political news sources. Some of our biggest informants are the cast of SNL, Seth Meyers, John Oliver, Trevor Noah and Hasan Minhaj – who have at times become more reliable than the news itself.

During the 2016 election, Trump embraced the lack of reliability from cable news and newspapers that allow for the spread of misinformation and spark the trend of “fake news.” Once the Trump era officially began, comedians began to feel the need to comment on the status of our political climate, especially to address the divides we continue to experience.

Late-night hosts and comedians can sometimes overlap in the technique of their endeavors, but comedians are allowed a bit more liberty in their choice of topic. This is because their content is much more personal rather than informative. Late-night hosts tend to mix comedy into their segments so as to make contentious political topics more bearable, whereas comedians get to go full ham on anything they feel passionate about. There are many comedy specials and late-night segments that center around the topics of racism, religion, sexism, sexual assault, homophobia and the man who embodies all of these at once: Trump.

Recently, John Oliver had a segment on his show “Last Week Tonight” that discussed the updates on coronavirus. The segment addresses the inaccuracies we have heard from the White House about cases in the U.S., along with new trends that have surfaced to promote proper hygiene practices in order to prevent the spread of the virus. Oliver mentions examples like selling a silver solution to “deactivate” the virus or people asking if they can get coronavirus from eating Chinese food, which leads the public to make xenophobic and completely false assumptions about the nature of the virus. This is yet another example of a very serious political and social issue that has not been accurately represented with facts from the usual distributors of information. Comedians have picked up the slack to try and educate people in a more entertaining fashion.

It is fascinating to watch this shift of informational power from the government and regular old morning news to the more liberal entertainment industry, and in all honesty, it has not been such a bad thing. Seth Meyers talks about how beneficial the Trump era has been for his career because of all the jokes he has been able to make about the administration. He noted that these jokes have been the only good thing to come out of this presidential administration. Furthermore, difficult or upsetting topics become easier to digest with the application of a comedic spin. We endure this political turmoil by creating satire for our amusement. This is a coping mechanism.