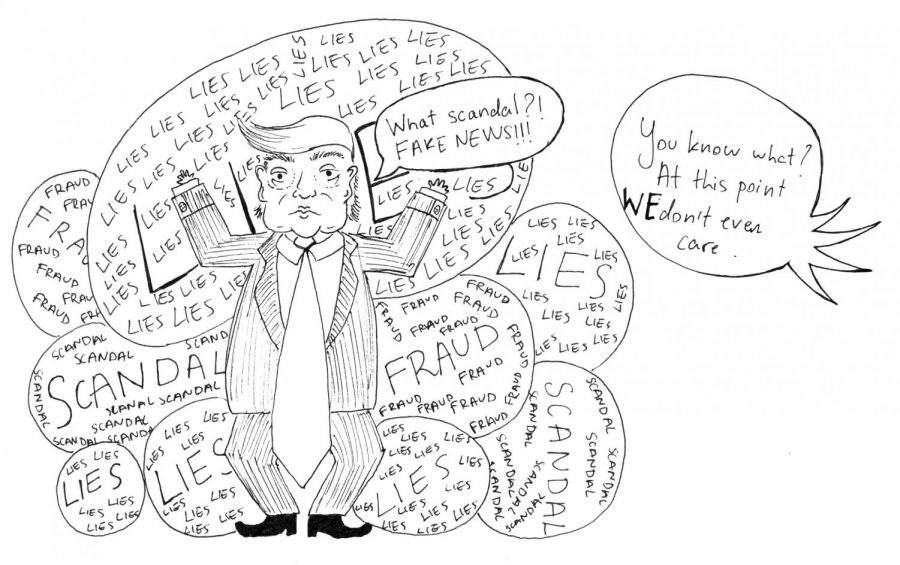 Keeping up with the news is exhausting. It feels like every day there is some huge revelation or scandal coming out of the White House that we are supposed to pay attention to, and within 24 hours the story has been buried by racist tweets, ridiculous assertions and eventually something even more outrageous. Early this month, a New York judge ordered Trump to put up $2 million to settle a lawsuit, claiming that he used his charitable foundation for his own political and personal gain. The president used this money to further his political cause, and to purchase items such as a football helmet signed by Tim Tebow for $12,000 and a self-portrait that, according to Mother Jones, was later hung at one of his resorts. According to The Guardian, the charity is being shut down after a “shocking pattern of illegality.”

For anyone else, this would be groundbreaking, but not for Trump. After a story that has lasted nearly a year, this turbulent case’s conclusion barely got the spotlight for a day. It’s difficult to know how to react anymore, especially when the political landscape has fallen under the huge shadows cast by the 2020 election and the ongoing impeachment inquiry. We as a nation have fallen into a bad habit of expecting a certain level of entertainment value in our news, and Trump takes advantage of this by treating his presidency like a reality show, using distraction, misdirection and lies to poorly cover up his many indiscretions. But just because it isn’t “House of Cards” doesn’t mean we don’t have to pay attention.

This newest development in one of Trump’s many ongoing legal battles is important to note for a couple of reasons. First of all, it is a major win for the rule of law in New York, and secondly, because it is a good example of how Trump lies to maintain his reputation, no matter what the legal reality is. Trump’s response to the lawsuit, which was filed last year by New York’s attorney general, exemplified his usual eloquence. “The sleazy New York Democrats,” the President of the United States tweeted on the morning of June 14, 2018, “and their now disgraced (and run out of town) A. G. Eric Schneiderman, are doing everything they can to sue me on a foundation that took in $18,800,000 and gave out to charity more money than it took in, $19,200,000. I won’t settle this case!”

However, not only did the president settle the case, he has quietly settled hundreds of cases related to his financial misconduct. So why does he keep saying that he doesn’t settle? Does he not realize that people know how to use Google? Well, as far as I can tell, he lies because there are no real consequences. He lies so much that each individual lie no longer gets the attention that it deserves, then he lies to distract from the old lies, and then he sends his personal attorney Rudy Giuliani onto FOX news to yell about Joe Biden.

So, please remember that the news isn’t supposed to be the latest HBO drama, and it isn’t necessarily there to entertain you. The news media is a vital part of the checks and balances on our government, and it should not be allowed to become Trump’s next reality show. Do not let the White House distract you from the little lies and the not so little cases of legal fraud. For as long as he can get away with sweeping these cases under the rug, he will keep treating his foundations, and the White House, like his personal piggy bank.