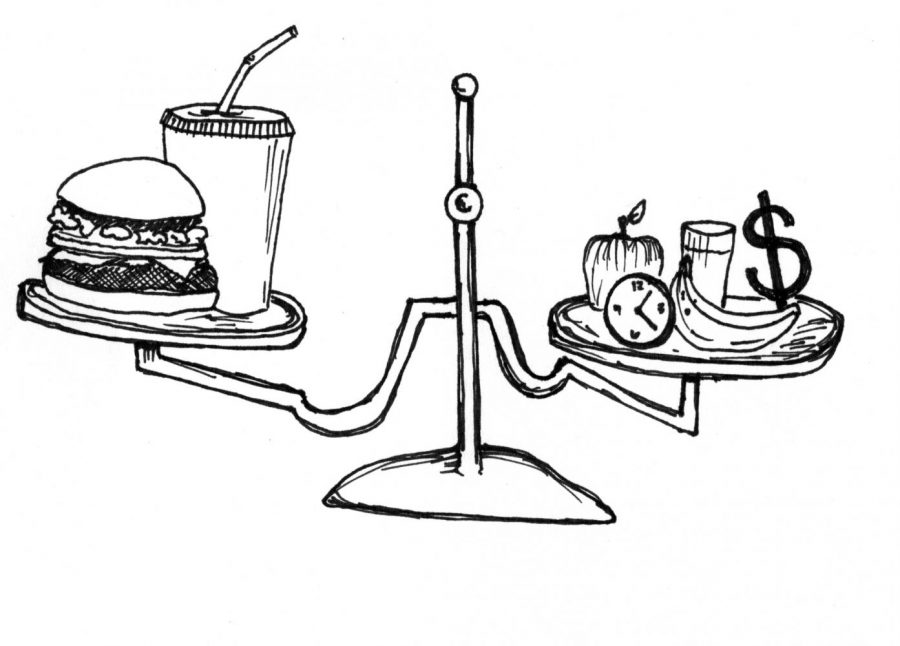 The average person knows that fast food is unhealthy, but there doesn’t seem to be any viable solution, at least not yet. A stroll through town or a scroll through Google reveals just how many fast food restaurants there are in Walla Walla. Their presence in our life is as saturated as the fat they use. So what’s the problem, and how can we fix it?

For starters, it helps to understand how fast food came into existence. While founders such as Ray Kroc of McDonald’s and Dave Thomas of Wendy’s began their empires rather innocuously with a hard work ethic and love of what they do, they soon began to slip into corporate greed. As their appetites outgrew their original customer base, they looked for other avenues to expand. And not only did their franchise footprint grow, so too did the waistlines of those they fed. An August New Republic article points out how government policy trying to eliminate poverty and grow small businesses were manipulated by fast food restaurants into further expanding their reach, especially in minority and low-income neighborhoods. It is important to note that while many of us like to blame either the public or private sector, this was a failure on both parts. Businesses can deliver great results when competition is high, but it is the responsibility of the government to ensure fair practices. Our government did little when fast food created food deserts (areas with no availability for healthier options) and cyclical poverty.

Depressing, yes, so what are some solutions? Like many other immense disasters, there is no silver bullet. A multi-pronged problem requires a multi-pronged reaction. To begin, a health-focused restaurant rivaling fast food in price and convenience would surely bring about good change. However, it would still be possible to overeat, even on healthy food. While there have been many attempts at this in small scale, they are mostly in urban areas and there have been no notable successes to quench the many food deserts. Another possibility would be taxing the foods causing poor public health. Romania is trying this and will be closely watched to see if it is a model for success.

Those are two great examples, but they don’t seem convincing enough to truly strike at the (clogged) heart of the problem. Perhaps one of the best solutions is also one of the most surprising: raising the minimum wage. It makes sense, even though it may not seem like it at first. Typically, a household of higher income will purchase foods of higher nutritional quality. And one reason why fast food restaurants create cyclical poverty is due to the low wages their employees are paid. Quite often those wages will only cover eating at, you guessed it, fast food restaurants. A lot of this goes back to the industry entrenching itself in minority and low-income neighborhoods where they can make a profit off their own employees while becoming the only affordable food vendor on the block. And it’s not like these companies can’t handle raising wages with the massive profits they generate, however it is likely that the companies will raise prices to retain their revenue. But they’re like a kid who saves their favorite pair of shoes for another day, until eventually they outgrow them. The margin of poverty and obesity is a lot more important than profit margins.

While it may seem that I am advocating for the abolition of fast food, that is not what’s on my plate. Fast food can be convenient when you have no time to spare and want a little guilty pleasure. The problem arises when that guilty pleasure becomes an unhealthy lifestyle. If we are to learn anything of our past, it is that we cannot let the fast food industry get away with unchecked growth in size of the company and their consumer’s waistline. History is already repeating itself in Africa where “The New York Times” reports fast food is settling in swiftly. It should come at no surprise that there is a correlating rise in obesity. We have to fix fast food.