The Purposes of Protesting 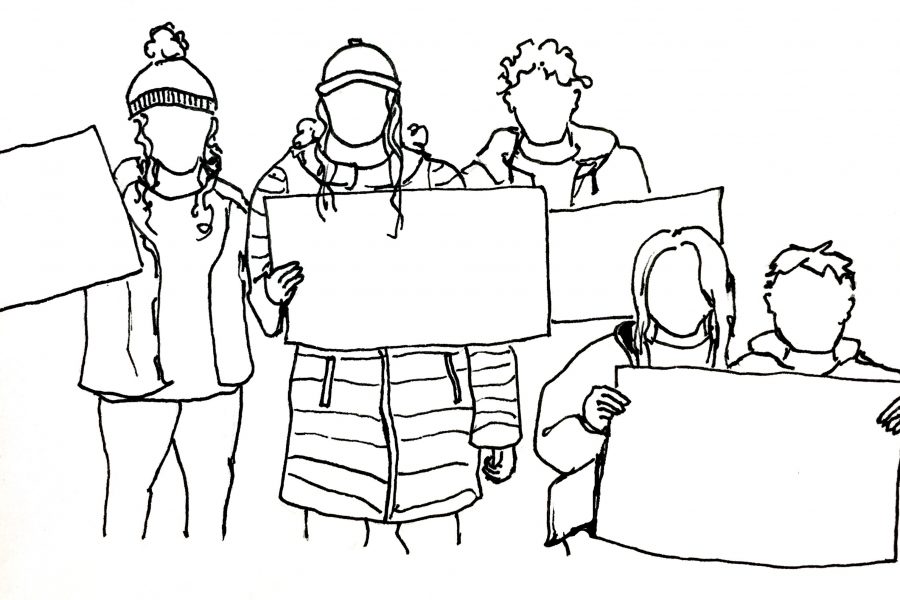 When you are standing in the middle of a crowd of protesters it’s hard not to get the impression that something is being done. Thousands of people chanting in unison “education not deportation” or “this is what democracy looks like” packs the same kind of punch as finishing the first stanza of Allen Ginsberg’s “America” after having consumed two glasses of sherry.

Then there are the signs: printouts of raised fists taken directly from the Industrial Workers of the World, Salvadoran folk art depictions of families being sundered by a terrifying anthropomorphic wall and of course the countless anti-Trump witticisms—phrases like “read a damn book” or “you can’t comb over racism” printed in multicolored Sharpie. It all feels so needed, so important.

But when night arrives and everyone begins dispersing, their throats sore and bellies empty, a terrible sense of unease sets in. Sitting in their cars, they might secretly wonder to themselves, “What, really, has changed?” Others might try to quell their doubts by focusing on the next thing—letter writing campaigns, a piece of protest art, an article, another protest. But, still, the sense of powerlessness lingers, resurfacing in the least expected moments as an amalgam of existential and political questions: “Do I have any power at all?” “What’s the difference between power and freedom?” “Am I free?”

Of course, these doubts are compounded by the fact that the 21st century is full of what are often seen as ineffective protest movements. The Feb. 15 protests against the Iraq War—the single largest protest movement in human history—barely dented public policy, and the Occupy movement looks to many like a confused and jumbled mess, filled with factious infighting and overly Utopian goals.

But here’s the thing: the real work of these sorts of social movements doesn’t lie at the level of the catchy chants or nominal goals, but rather at the murky level of human-to-human interaction. Occupy, for example, may not have achieved a Robin Hood tax (one of its most explicit aims), but according to the journalist Michael Levitin it did pave the way to smaller protests that led to wage increases in states like Arkansas, Alaska and Nebraska. Are most of the Occupy participants aware of this fact? Probably not, but they were nonetheless instrumental in its development.

We find exactly the same sort of thing when it comes to the Feb. 15 protests, where numerous small countries decided to opt out of sending troops to Iraq as a response. Here, too, it’s unlikely that your average protester that marched through the streets of Quebec in 2003 is aware that his actions led directly to Canada delaying troop deployment. In this hypothetical protester’s mind his actions were a failure because the war didn’t end, but he may very well have been instrumental in saving the life of some Canadian soldier.

What’s the point of all this? Well, those deep questions keeping the protester up at night might have a lot to do with the fact that he’s just unaware of the impact of his actions. See, it’s easy to be misled into thinking that you are powerless if you’re unwilling to accept the possibility that the impact of your actions might be more subtle than you can comprehend. If you do accept this, though, you find that those unsettling questions from earlier are replaced by the following even more unsettling one: “Do I feel comfortable impacting the world in ways that I might not understand?”

Now this is the question that should be keeping the protester up at night.