The curious case of Colin Kaepernick 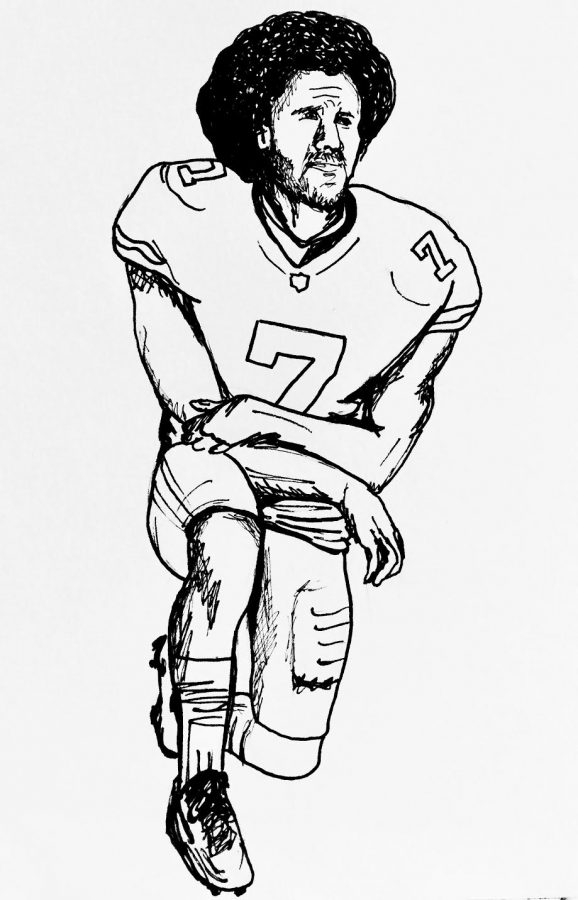 The First Amendment guarantees freedoms concerning religion, expression, assembly and the right to petition. Recent events suggest that there might be some ‘exclusion’ to these rights when the views expressed conflict with the norms and values many hold dear. Colin Kaepernick, backup quarterback of NFL’s San Francisco 49ers, has paid the price since last month when he knelt during the national anthem prior to his team’s first game on ‘Monday Night Football.’ His gesture supports people of color, and in particular of the black community in the United States, which continually suffers from police brutality. Kaepernick’s message is clear: his home country has failed to accomplish the race equality it always seems to preach.

Kaepernick admirably tried to give a voice to those that are voiceless, and in particular to those that have lost loved ones to police violence. His gesture was supposed to raise awareness and make people think about the current problematic racial situation that remains unaddressed in the United States. Instead it has caused very strong negative reactions in public spheres and social media. Many claim that he has offended American patriotism and ideals, that he doesn’t love his country, and that he doesn’t deserve to be an American. Last week, Twitter was growling because ESPN analyst Trent Dilfer blasted Kaepernick by saying that he should worry about playing rather than protesting because his actions were causing friction among his team. Dilfer was eventually proved wrong as Kaepernick’s teammates became inspired by his actions and followed him in his protest. Unfortunately, the more his protest garners supporters, the stronger the negative reaction of the media.

I can’t help but feeling deeply disturbed by the many hateful reactions that this peaceful action inspired. It seems that watching young, primarily Africa-American men (68% of NFL players are African-American) beat each other up every Sunday has become more important than shedding light on racial issues. Sports are supposed to be fun, but racial issues are not. Apparently, players are not entitled to their right of peaceful protest in support of the African American community if they are a professional football player. Apparently, those players are not entitled to the basic rights of an American because people like Trent Dilfer will come out and tell them to simply shut up and worry about doing their job. Apparently being an American means minding your own business. It doesn’t matter if innocent people are dying due to police brutality, especially when those are not white people. The only time when black people matter to you is when they sing or play professional sports.

Apparently, what makes a patriotic American is standing up and having your hand over your heart when the national anthem plays. It is pretending that everything is okay and that other people are okay too, because if they are not, well, that is their problem to deal with it. Football fans don’t have to worry about African Americans or other racial groups because if they have no connection to the players (beyond wearing jerseys with the players’ names on the back), it’s not a real problem. Americans truly believe that USA is the greatest country on Earth, despite it not being quantitatively the best at anything. Unfortunately, many close their eyes to injustice or even refuse to believe that anything was ‘unjust’ in the first place. Because this is the greatest and most democratic country on Earth, right? It could not possibly bring injustice upon its people.

Fortunately, there are those like Kaepernick who are not oblivious to the real issues that the country has, people who recognize that ethnic oppression is still present and that racial equality is nowhere to be found. And yet, people like Kaepernick tend to be ‘crucified’ the most because kneeling to the anthem in sign of protest is more problematic and unpatriotic than wanting to chase immigrants away or shooting innocent black people. When retired NFL player Darren Sharper went to jail for rape, nobody said anything. Another player got only a one game suspension because he was outed by his wife for beating her several times, but nobody said anything. Then a player doesn’t kneel during the anthem and everyone goes crazy.

Kaepernick is doing what the media is supposed to do. Instead of worrying so much about why Brangelina broke up, it would be refreshing to see a broader coverage of the shooting of young black men on the streets by the police. It would be very appreciated if the victims were treated as such and that the media would not try to find something for which to blame them, like their past history or their ‘suspicious’ Facebook pictures. It would also be appreciated if the black kids that have died were portrayed as kids by the media and not as adults, as Ryan Lochte should be talked about.

This protest should inspire other people to take a stand when it comes to racial issues. It should make people reflect on the flawed society they are in and not close their eyes in front of the injustice. This protest should bring solidarity with Kaepernick’s good intentions and with those that suffer injustice, not cause anger because he violated the ideals of ‘American patriotism’ and ‘American values’ by not singing the anthem. What are American patriotism and values even? Are they ‘singing the anthem’ and buying more red and blue stickers during the Olympics? Or do they mean living in a free society in which justice is brought upon people, despite their skin colour, their ethnicity or beliefs? Unfortunately, the latter is not the answer.