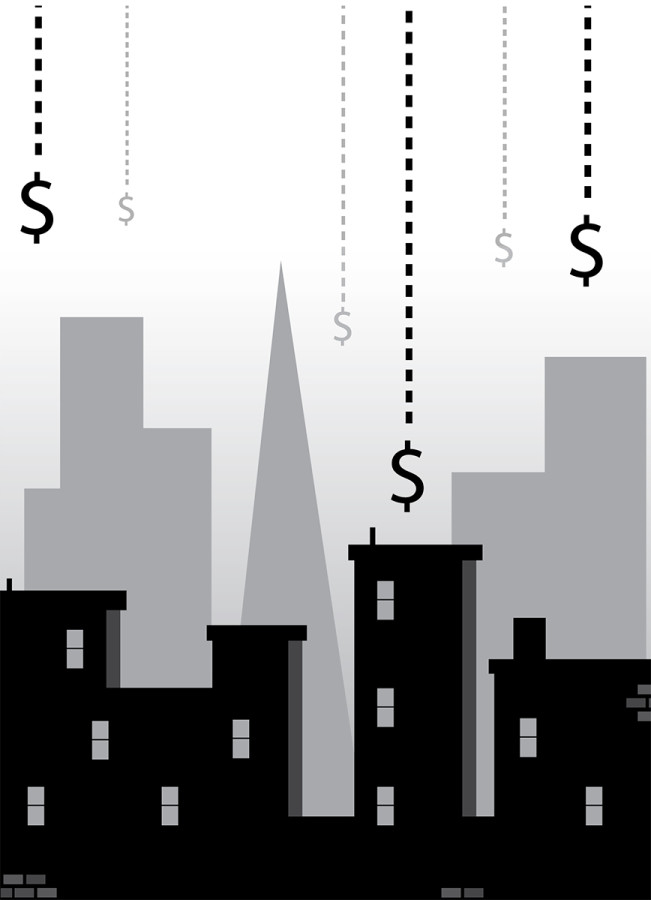 I grew up in San Francisco, and I’ve always thought of my city as a vibrant and whimsical place that unconditionally loves and accepts its residents. The city embraces diversity and, as a result, it is always re-defining itself to encompass new residents. However, its latest incarnation as the tech hub of the world seems to be dividing rather than uniting the people.

The tech industry has transformed the entire Bay Area, bringing in hordes of new people and a lot of new money. Gentrification happens when the demographics and property values shift upwards to cater to wealthier residents, but as areas “improve,” the poorer people are squeezed out or evicted. Many people are upset at the tech industry in Silicon Valley for gentrifying San Francisco. Class tensions in the city are heightened and unmasked. The cost of living in the city has skyrocketed with the influx –– the median rent for a two-bedroom apartment in the city is over $4,000 –– and the disparities are clearly visible on the street. I spent my summer working in a biotech lab by day and as a volunteer in the county hospital by night, so I got glimpses into both extremes.

Despite the gentrification, immigrants from disadvantaged backgrounds are still moving into the city. Many of the patients I worked with in the hospital were recent immigrants from all over –– Mexico, Turkey, Iran and China, to name a few. Unlike the new techies, these immigrants to the city don’t have much.

My job is in the birth center and every delivery room has a view of the city out the window. It’s beautiful at night, with city lights illuminating the hilly streets. I always reflect on how lucky these infants are to be born into San Francisco. But being “from” San Francisco seems to have a different meaning now than it did when I was growing up, and with all that’s been changing, I hope these children won’t be squeezed out or silenced.

I had a lot of fun showing a British friend around the city this summer, but I was surprised that the sights at the top of her list were the headquarters for Google, Facebook and Twitter. The Bay Area has so much history, from the Gold Rush to the Summer of Love, and so much culture, from Chinatown to the Mission District. It felt so weird that, of all San Francisco has to offer, big tech companies were the most exciting to her.

Although Silicon Valley technology has given rise to some amazing things, I don’t think it can ever be as important as the lived experiences San Franciscans have had during the past several centuries. Despite bringing in lots of money, the tech industry isn’t the heart of the Bay Area. When it’s presented as the most important thing, other voices in the community are silenced.

Viewing the tech industry as San Francisco’s pride and joy is becoming all too common. The ridiculous Six Californias initiative separates San Francisco and the South Bay region into a state called “Silicon Valley.” This is an indicator of the degree of hubris certain individuals in the tech industry have, as they present themselves as the crown jewels of the state.

San Francisco hosts a huge gay pride parade every summer. However, most of the floats I saw were for-profit corporations. Google, Facebook, Apple and many other tech companies handed out stickers and gift cards advertising their corporation’s logo. Some companies, like Facebook, had rubber stamps that they used to literally brand the crowds. It is great that these companies openly support people of all sexual orientations, but corporate propaganda filled social justice parade is a big non sequitur. Some groups in the parade were marching for other social justice issues, including Free Palestine and anti-gentrification. Seeing an anti-gentrification group dwarfed in between the larger, flashier floats of big corporations made the problem into a tangible visual.

I know that when I was working in the lab it sometimes felt like a stretch to connect the technical work and experiments to the positive effects they could someday have on people’s lives. However, the ultimate goal of technology should be to serve people and communities, and I made sure not to forget it. For the tech industry to happily coexist with San Franciscans, it must stop overshadowing individual voices when it’s supposed to be promoting them.