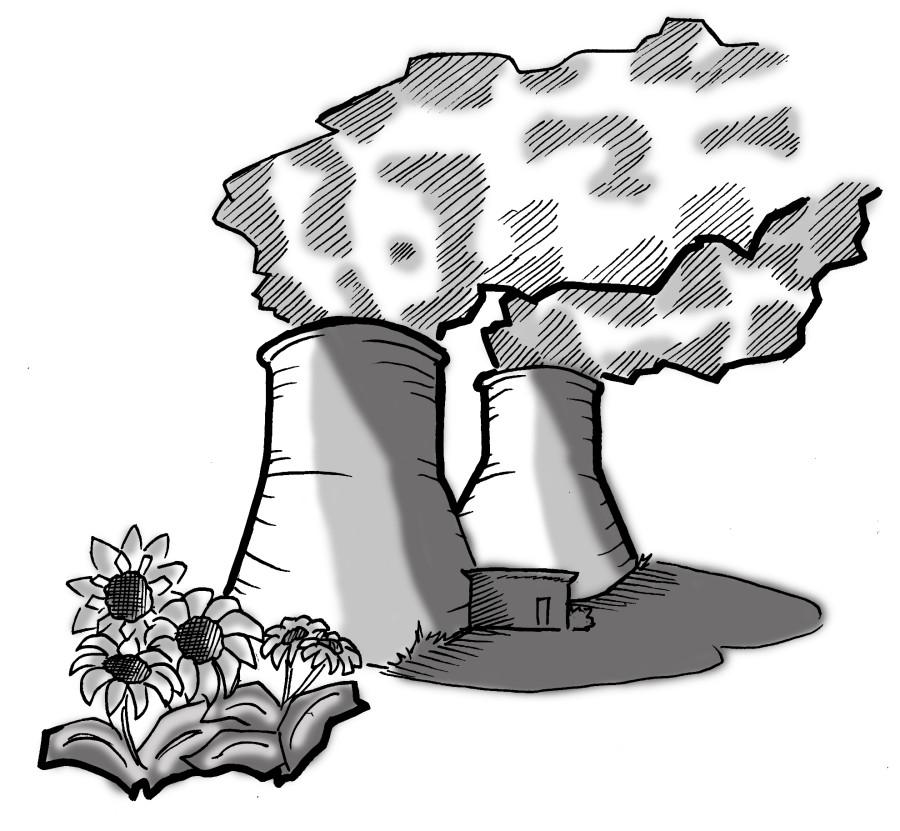 After Fukushima, Chernobyl and Three Mile Island (nuclear power plants that unintentionally exposed thousands to radioactivity), it has been taboo for an environmentalist to be pro-nuclear. While I don’t mean to be unsympathetic to the victims of radioactivity-caused cancers, we should not forget nuclear’s enormous benefits. The hysteria these disasters have caused (and maybe America’s phobia for just the word “nuclear”) may be blinding us from a readily available and relatively less pollutant-intensive energy source.

Very simply, nuclear energy is created when uranium atoms split in a process called fission. This creates energy and releases heat, producing steam. This powers a turbine and creates electricity. The by-product of the split uranium atoms is radioactive and hazardous if exposed to people or the environment. The most responsible way to contain and manage this waste is under intense debate.

I’ll admit it: The colossal gray steam-producing nuclear reactors are not as pretty as their wind and solar competitors. Like any energy source on the market today, it has its flaws. If radioactivity escapes, it can increase locals’ chances of getting cancer. Greenhouse gases are emitted mining and transporting the uranium. Opening a nuclear plant is a tremendous initial investment, especially because the nuclear industry is no longer receiving government subsidies (but the fossil fuels industry does).

So why in the world would someone be in support of nuclear power after all those drawbacks? Here’s the kicker: The process of nuclear fission is pollutant free. It emits no carbon, methane, nitrous oxide or any other greenhouse gas. Because the uranium must be mined and transported, nuclear energy unfortunately creates a footprint. But a simple comparison of emissions is convincing enough –– according to the American Chemical Association, nuclear releases 65 tonnes of carbon dioxide-equivalent gases per GWh on average, while natural gas produces 602 and coal produces 1,045 tonnes per GWh.

NASA believes that nuclear power has prevented 64 gigatonnes of carbon dioxide equivalent greenhouse gases that would have otherwise been emitted by fossil fuels.

Mortality rates are also relative. The9billion.com believes that nuclear energy accidents have “been a source of serious contention,” while the coal industry has done a top-notch job keeping coal-related deaths private. They also claim that for each casualty due to nuclear energy, 4,000 die as a result of coal.

NASA also believes that nuclear power has prevented 1.84 million deaths that would have otherwise contaminated those affected by the fossil fuel industry.

While tremendously expensive initially, nuclear power plants pay themselves back with time. Edward L. Quinn wrote to the New York Times in a letter to the editor, “The upfront cost of nuclear is indeed daunting, but the reality is that those costs are spread over 60 or more years. That’s why today’s nuclear plants are such bargains, having been efficiently producing power for decades after the big initial investment.”

We can prevent malfunctions that leak radioactive material to the public. Like the U.S. Nuclear Regulatory Commission says, let’s make sure nuclear power plants are not vulnerable to natural disasters (especially earthquakes). It’s okay that generators are disposing of their radioactive waste on-site (there is no government issued disposal site) as long as they make every effort to prevent exposure to the public or aquifers. We can improve safety regulations to prevent a possible terrorist attack. We should make our regulations stronger instead of sticking to the fossil fuel status quo.

We cannot continue to use fossil fuels at the rate our average surface temperature is increasing. Natural gas does not reduce our emissions enough. Renewables are not ready to support the world and the energy demands of its increasing population. Nuclear is not perfect either, but it’s reliable and the least pollutant intensive source ready for our growing market. We should not let Fukushima, Chernobyl and Three Mile Island scare us from nuclear in general. Instead, we should modify our current system to prevent its risks until we have developed a reliable renewable energy resource.