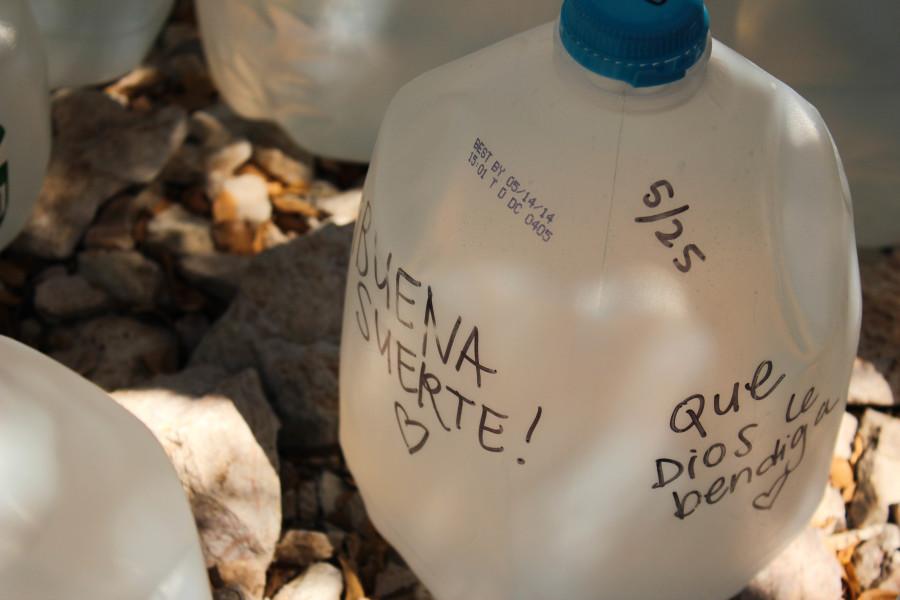 We met Manuel at the Juan Bosque Migrant Shelter, the only shelter open at night on either side of the border.

Earlier that day, he had been dropped off by old school buses that had been converted by the U.S. Department of Homeland Security (DHS) to transport deportees from federal detention centers to the U.S.-Mexico border. Twenty-eight days earlier he had been seized by Border Patrol in the Sonoran Desert, only to be swept into a criminal justice system designed to put men like Manuel behind bars. Not only was he sentenced to nearly a month in detention for illegal re-entry, Manuel was forever marked as a felon––a label that will prevent him from holding any legal status in this country. But what troubled Manuel was not his loss of hope for legal status, but the fact that his wife and three children had spent the last month without a source of income in their home of Chicago.

On June 21 we––along with nine other Whitman students––traveled with Aaron Bobrow-Strain, associate professor of politics, for a two-week expedition to learn about  political, economic, environmental and social issues involving the Southwestern border region. We traveled between border towns and cities on both the Mexico and Arizona sides and met with community members and leaders, human rights activists and enforcement officials, attorneys and migrants themselves. Border policy, we learned, is horrifying in both its emotional toll and financial cost. This cost, however, is not an accidental side effect. U.S. border policy isn’t broken. It’s working exactly as it was designed: to discourage crossing into the United States and to make it as difficult as possible. What needs to be done is not to intensify or extend current policy, but actively move to curb and reverse border militarization. Only then can our nation attempt to forge real security.

In 1993 Border Patrol Sector Chief Silvestre Reyes in El Paso, Texas introduced “Operation Hold the Line.” His strategy focused enforcement resources in urban areas so that migrants would be forced to cross the border through the deserts in rural Texas instead. At the other end of the border in San Diego, Calif., “Operation Gatekeeper” aimed to accomplish the same: to close the border within the city and thereby push migrants into the desert. This policy creates a kind of funnel where migrants are pushed to cross through the rugged mountains and winding canyons of the Tucson, Ariz. sector.

During summer days the heat climbs to 115 degrees or more. During the winter nights temperatures drop to hypothermic lows. Crossing on foot, it is physically impossible to carry enough water to stay hydrated. Navigation through the twisting washes and valleys is prohibitively difficult without a guide. The remains of some 6,000 migrants dead from exposure have been given to the Arizona Recovered Human Remains Project since the creation of the funnel in the mid-1990s.

Creeping militarization has shaped both the training of the Border Patrol and the tools that they use. Military technology, repurposed for border security after use in Afghanistan and Iraq, is near-ubiquitous on the border. Automated drones scour the desert floor from thousands of feet up. Huge surveillance blimps serve as additional eyes and hang in the air as a potent psychological symbol of the Border Patrol’s presence. Mobile Security System trucks are like cherry-pickers equipped with cameras––with their platforms extended, they can see for some 10 miles around. As conflicts in the Middle East wind down, Customs and Border Protection is poised to become the next major client of military-industrial giants such as Lockheed Martin.

All of this is in the name of making the border more secure. But for whom? Certainly not for the ranchers in the Tucson sector whose property runs up directly against the border. Smugglers cut their fences regularly; the Border Patrol can, without a warrant or an easement, tear through their property with four-wheel drives or plant motion sensors on their land. The rancher’s wife who has begun to take anti-anxiety medication because she sees the lights of drones over her property each night feels no more secure. For pastors whose congregations are divided between documented and undocumented, with migrants praying next to Border Patrol agents, their flocks are no more secure. And to the family and friends of José Antonio Elena Rodriguez, who was shot from behind some seven times by Border Patrol agents while they were in a tall tower and he was standing unarmed on a street corner in Nogales, Ariz., secure is the last word associated with la frontera.

The true cost of these so-called security policies is staggering. The combined yearly budget of the Customs and Border Protection agency and the International Customs Enforcement agency comes out to 18 billion dollars. The Migration Policy Institute reckons the combined budget of every other federal law enforcement agency––or the FBI, Drug Enforcement Administration, Secret Service, U.S. Marshals Service and Bureau of Alcohol, Tobacco, Firearms and Explosives––at 14.4 billion. That’s 24 percent less than the money flowing to the agencies charged with immigration enforcement.

Securing our borders runs against patterns of north-south migration that have been ongoing for thousands of years. For much of the past century and a half, seasonal migration has cycled workers from the communities of Northern Mexico to the labor-intensive agriculture of the West and back again. For years, this movement was unimpeded by tight border enforcement. Now, border policy strives to seal off patterns of migration that are firmly historical and arguably inevitable. Consequences have been disastrous: Since the enactment of Operation Gatekeeper in 1994 almost 6,000 people have died while attempting to cross the deadly desert. And many of those that survive the crossing  have faced separation from their families, exploitation by employers, jail time and extreme poverty. The financial toll is staggering as well.

In 2005, the DHS implemented Operation Streamline as a way to close down the border via the criminal justice system. Prior to 2005, immigration via the southwestern border and overstayed visas were considered civil issues, and so all proceedings went through civil, administrative courts. Following the movement towards border militarization, the 2000s saw the act of crossing the border become criminalized. Once returned directly to the Mexican side of the border, those apprehended are now charged with a criminal felony. Streamline is a process that allows courts in border states to convict those charged with the felony of illegal re-entry en masse. It has normalized mass trials. In the Tucson courtroom we watched as 70 men and women were escorted by plaintiffs and border patrol agents, bound with chains at the feet, waist and hands.

Federal Public Defender Laura Conover considers this “efficient process” unprecedented in our criminal justice system. What does it mean for 70 people to be convicted as felons in the course of 45 minutes? For one thing, each defendant is allowed no more than 20 minutes with an attorney. This stood out as ironic especially as Conover spoke with our group for nearly two hours and we still were only able to breach the surface of the Streamline process.

By trying migrants five at a time, 70 a day, five days a week, Streamline warps due process, a pillar of our criminal justice system. As a theoretical deterrent, this process is heralded as a success. What worries these legal experts in Tucson more than anything is the precedence it sets for mass trials as the norm in all branches of the justice system. Under the immigration reform bill which has cleared the Senate, the size of mass trials is slated to triple from 70 a day to 210.

The criminal justice system is not the only institution that is being undermined by border militarization. The surrounding environment bears the burden as well. Border states have used the political inertia propelling border security to erect the “wall” as quickly as possible. Slipped into the body of Arizona’s 2005 Real ID Act was a waiver for 37 federal laws, including the Clean Water Act, Endangered Species Act and Farmland Protection Policy Act. These waivers have had serious implications on the land and the ranchers, farmers and border communities that rely on the land for their livelihoods. Without any requirements for environmental evaluations, border militarization and construction of the wall––that is proving to be devastating to both border communities and the environment––will continue. Scientists have determined that the wall has not only prevented the migration of endangered species like mountain lions and deer, but has obstructed crucial flood patterns, which will drastically endanger the precious water flows in the desert. The border wall cuts directly through Organ Pipe Cactus National Monument––a U.S. National Monument and UNESCO biosphere reserve––unhindered by the protections that shield wilderness areas in other parts of the country or even by the trouble of an environmental impact statement.

As we readjust into our Whitman community, our border trip group continues to challenge the distance we have placed between ourselves and the reality of the borderlands. Our current understanding of national security is directly tied to the justifications behind 30-foot border walls and miles of concertina wire, of dividing families and border communities’ increasing lack of security. If we accept the wall then we must also accept the environmental, financial, emotional and social threats stemming from current policies. It seems incredible that the political rhetoric surrounding border security is so removed from the reality that we witnessed for ourselves. Neither reversing the trend of border militarization nor calming our fear of our neighbors will be easy, but they are nonetheless feats that must be accomplished to preserve the integrity of our nation.