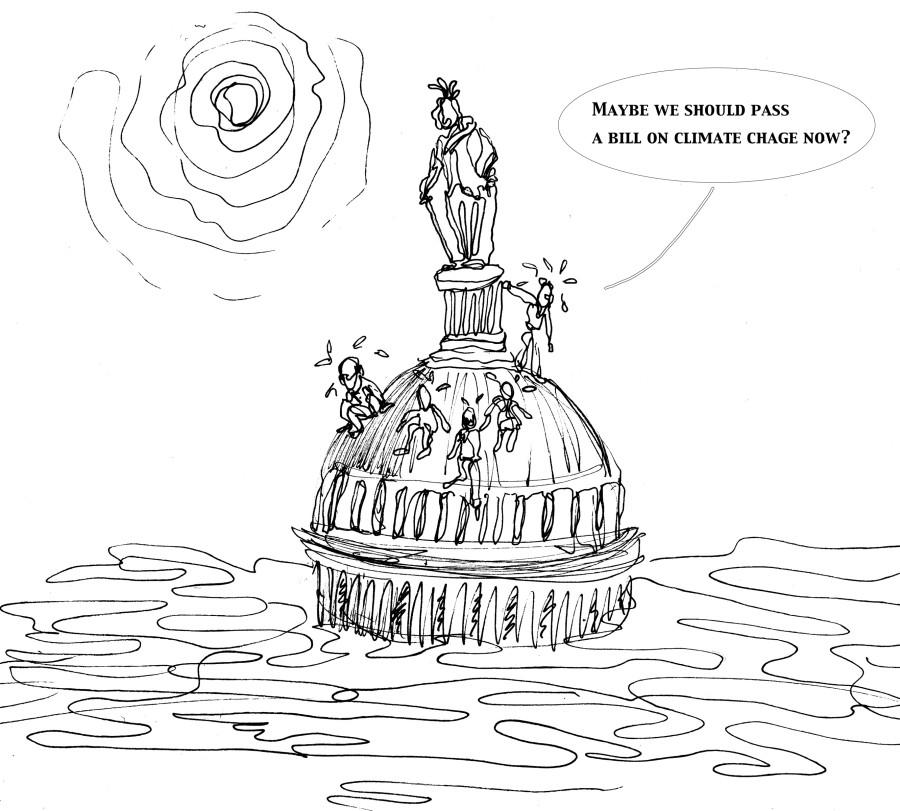 I advocate the end of the world as we know it.

This is something readers should know about me. Note that I am not in favor of the end of the world. The world is mountains and books and rain and the firm, reassuring crust beneath our feet. I’d hate to lose that.

The world as we know it, means that money rules, that we treat the planet like a toilet and that two of any three randomly selected groups of humans are more likely than not to have some feud with each other. This is what needs to end.

This is also why I am not afraid of climate change. I’m not saying we should be complacent: far from it. But fear does not enter into the equation. What’s happening to Earth is a different matter entirely.

If left unchecked, runaway emissions will eventually cause the ice caps to melt, and the poles will turn into massive heat sinks. However, that would only be the dramatic finale to a full course of global warming. Its first effects are already being felt across the globe: extreme weather effects, desertification, the death of coral reefs and the early onset of spring.

As I write this, Funso, the first Intense Tropical Storm of the 2011-2012 Indian Ocean season, is hovering over Mozambique, where it has already caused death and destruction. In 2005, the season of Katrina and Rita, we ran out of names for Gulf hurricanes for the first time, and were forced to use Greek letters. Now, we encounter that problem almost every season.

For purposes of this article, let’s assume that the science linking warming effects to hurricanes, blizzards, heat waves and droughts is sound. Now, I’ve always viewed the United States as the center of this fight: possibly due to a bit of latent jingoism, but mostly because, frankly, we pollute and consume far more than anybody else. It’s easy to blame China and India, until you think about whose demand they’re filling.

Until recently, we Americans were ducking the consequences of our actions rather deftly: we were driving pollution, but too well-situated to feel its effects. Our productive lands are, for the most part, not coastal plains, and our economy is diverse enough to withstand storms. Though the 2005 season began to change all that, the Third World continues to bear the brunt of the hit.

As cynical as it is to point out, we in this country don’t change policy based on watching others suffer. If we’re ever to go after global warming, it will first have to go after us: where we live.

Which brings me to the point of all this. If there’s one thing in our country that’s consistent, it’s hindsight. Our highest-profile laws are made in response to sensational crimes; our military is always armed to the teeth for the previous war, our airport security primed to foil whatever plot al-Qaeda last tried. In most situations, legislation is too late to do much about what triggered it.

The environment, however, is different. It’s on a bigger scale, far bigger than anything else bandied about on the political stage. This scale grants us time to undo the damage we’ve done. No matter how far we extend the consequences of our actions into the next millennium, it will not be too late.  This is why I’m not scared: because sooner or later, some terrible first-world event will shock us out of complacency and lead to swift, direct action that will mitigate the worst of the crisis.

The world as we know it cannot persist after that. Sea change will follow catastrophe like a tsunami after an earthquake. Once we know the stakes, we’ll never again look at our environment the same way.

And yet, we cannot in good conscience wait for this. As Al Gore is fond of saying in his “Inconvenient Truth” presentation, the choice facing us is a moral one. We have two options, as a nation: we can act now, under our own will and power, to turn the Earth off its collision course with disaster, or we can offer up the Third World as a sacrificial lamb, while we wait for severe climate change to club us to our senses.

This past autumn, my hometown of Austin, Texas was threatened by drought-fueled wildfires that destroyed thousands of homes and burned for days on end. Lest readers believe me to be an armchair moralist, know that the suffering awaiting us stood on my doorstep. Yet I know what almost happened to my home is nothing compared to what is already being suffered in Mozambique, Bangladesh, the Maldives or hundreds of other places across the globe.

When fear is removed, all that remains is the choice between right and wrong. Will we let Los Angeles burn or New York fall into the sea before we make that choice?