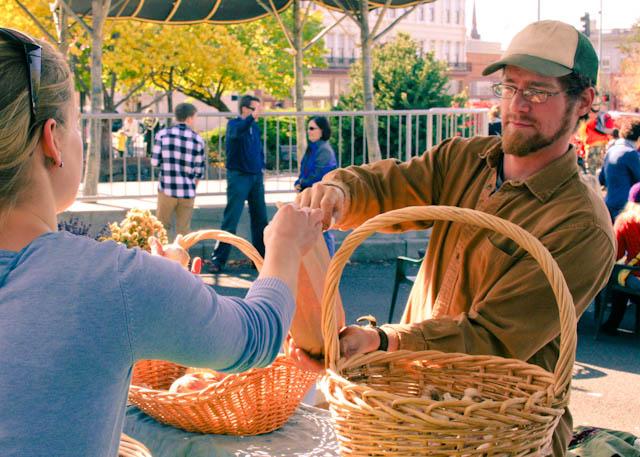 As winter approaches, the Walla Walla Farmers’ Market draws to a close. The last market will be this Saturday, Oct. 31, and with the exception of the Holiday Market in December, fresh and local produce will not grace the streets of downtown on weekend mornings until May.

The growers and farmers that sell their goods remain positive at the end of the year, despite the economic downturn.

“Overall, we’ve had a good year. We’re down a little bit in revenue, but some of our sales in produce are actually up,” said Beth-Aimee McGuire, the market’s executive director.

Vendors have also found this season to be a positive one.

“It’s been a good summer,” vendor Antoinette LaRondelle said. “Very multicultural. We have had people come from all over. I also love to have Whitman students and their families. We have had hot days and cold days, but it’s been fun. ”

LaRondelle feels like the economy has slightly affected the market, but not enough for any permanent damage.

“I felt the economy downturn in the middle, in July and August,” she said. “This could have been just because it was hot, but at least it has picked up again recently. People are being more frugal with their money, but other than that, things are well.”

LaRondelle also believes that the green movement has helped the market by encouraging people to shop locally.

“I hope the local movement has helped us,” she said. “People are becoming more conscious of going green and going local, and of course the fact that I use most everything in the summer from local growers encourages people to buy more local food. We also have active co-op groups, which are going well.”

Vendor Michael Locati also believes that the economy has helped the Farmers Market by encouraging people to be more conscious.

“More people probably don’t go out to eat as much, so we get more people to come out here,” he said. “We see a shift in sales from restaurants to local individuals. Once you get established down here and start making products, people ask about us, so we start growing. It takes time for the market to adapt, but we have made certain changes.”

For example, Locati said that this is the first time he has brought squash to the market, to see what varieties people prefer.

“We’ve also seen a lot more of young mother canning going on this year, which has helped the farmers,” Courson said.

A current challenge is growing the market on Sundays. While Saturdays are busy, fewer vendors and cusomters come on Sundays.

“We would like to see the market keep growing, especially on Sundays,”  LaRondelle said. “That’s my biggest concern. We have good attendance of vendors and people on Saturday, but Sundays are so slow. We would like people to come here on Sundays for breakfast so that we can feed them.”

Courson is glad to see the market doing well despite the economic downturn and is looking forward to a new season in the spring.

“A lot of us farmers have seen the progress in the market,” Courson said. “So we are growing more and more berries to meet the customers’ demands, and other farmers are growing a lot more too.”