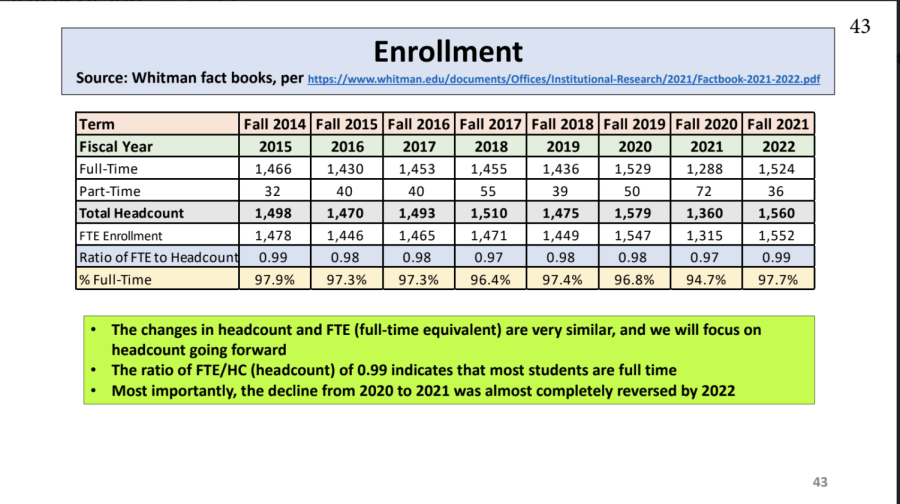 A report commissioned by the Whitman chapter of the American Association of University Professors (AAUP) concluded that many of the cuts made in last year’s financial sustainability review were unnecessary.

The AAUP successfully raised $5,000 through fundraising platform go-fund-me in under a week in early December according to an update posted by Art History professor Matthew Reynolds on Dec. 9.

The external budget analysis was launched in response to $3.5 million cuts made last year that the AAUP argues was uneven and made without proper faculty consultation. The cuts focused on student services and faculty compensation over cuts to administration, according to the AAUP.

According to administrators, the cuts were first conceptualized in the fall of 2020 and were made in response to decreasing student enrollment and the upcoming “demographic cliff”—an anticipated 15 percent drop in the number of prospective first year students that is slated to begin in 2025, according to Higher Ed Magazine. The COVID-19 pandemic was not the impetus for the cuts, although it did initially cause some financial strain for the college. 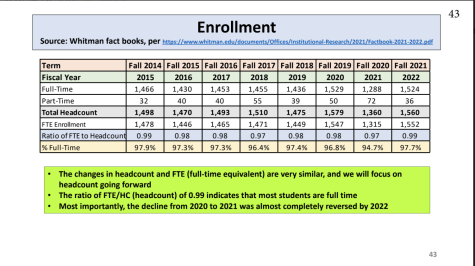 “The FSR was forward-looking and long-term, aimed at addressing structural budgetary issues, which means the decisions were not affected by COVID relief funds, the endowment growth in any single year, or the size of one particular class,” Interim Vice President for Communications Gina Ohnstad said in a statement for the College.

“It is important to distinguish between the one-time changes made to retirement contributions and salaries and the long-term systemic changes made as a result of the financial sustainability review process. Whitman did not undertake the FSR only as a response to the one-time event of COVID. The college needed to make difficult decisions about the long-term health of the institution and to make funds available to invest for the future strength of the college.”

The Financial Sustainability Review was formed in Nov. 2021 and was comprised of three committees of students, staff and faculty who assessed where cuts could be made. A draft report was issued on Feb. 2, followed by a public comment period and a final vote by the President’s Cabinet on March 1. The Board of Trustees voted to approve the cuts on March 19.

In a March 3, 2021 email to the Whitman community, President Kathy Murray addressed what she claimed were misunderstandings about the proposed cuts. She argued that they were necessary for the future financial health of the college.

“This is challenging work; we face difficult decisions. There is someone who loves every single thing we do at this college; otherwise, we wouldn’t be doing it anymore. And yet, we cannot just continue down the same path at a time when the world is changing all around us,” Murray wrote.

By contrast, the AAUP’s external financial report argues that Whitman is in a strong financial position when compared to years past and to peer institutions and that the cuts put students and faculty at a disadvantage.

The report was authored by Eastern Michigan University Accounting Professor Howard Bunsis, who has held multiple positions with the AAUP and conducted reviews of other colleges and universities in the past several years.

Bunsis’ report was released in an 86 slide presentation in late January. The AAUP also released a shortened version of the presentation and a document with some key takeaways.

Bunsis argued that Whitman’s revenue increased between 2020 and 2021 due to federal COVID-19 funds and an increase in the endowment. He concluded that FSR cuts during this period were not necessary based on the College’s financial health.

“The administration will claim that when they made the decision to cut in 2020, there was tremendous uncertainty. However, their first move was to cut mostly instruction personnel costs. Even at the time, the level of reserves was very high,” Bunsis wrote. “In retrospect, the administration basically admitted their mistake by reinstating some of the cuts, but COVID is exactly what reserves are for: to deal with sudden and unexpected declines in revenue or increases in expenses. The admin just followed other universities and made cuts that were not necessary at the time, and did not consider using the reserves that exist for just this type of contingency.”

FSR protestors drew attention to Whitman’s substantial endowment. The Bunsis report notes that the endowment value and available cash increased in value from $654 million in 2020 to $934 million in 2021. This increased Whitman’s net assets significantly.

Funds from the endowment make up approximately a third of the college’s operational budget, and five percent of endowment funds are spent each year. The college reassesses what percentage of the endowment can be spent every three years.

Additionally, Bunsis notes that the college had 105 months of expendable net assets, or reserves, available for use in unforeseen circumstances.

“This does not mean that all of this can or should be spent immediately; it does represent that Whitman has financial freedom and flexibility to deal with an unexpected event like the pandemic,” the report states. 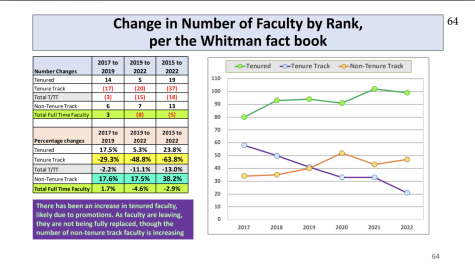 The report also argues that faculty at Whitman are at a disadvantage when compared with faculty at peer institutions. The number of non-tenure track faculty—who are often paid less than tenure and tenure track professors—has increased since 2017. Additionally, full professors are not receiving pay cuts, but, because of the trend towards lower paying positions, professors are making 3.4% less. 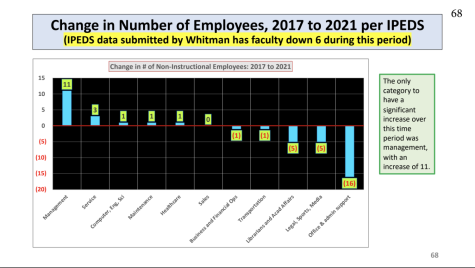 In an email sent to the Whitman community on Feb. 23, President Kathy Murray expressed confidence in the College’s prior financial decisions.

“The Board remains convinced that the Financial Sustainability Review completed in 2021 was a necessary recalibration of where the college chooses to invest its dollars so that we can maintain that strength and make investments to best serve our students for years to come.”

This article is the first part in The Whitman Wire’s ongoing coverage of the WCAAUP external financial analysis.